The Met Office has issued several days worth of snow and ice weather warnings for the UK advising of heavy snow and ice which could cause treacherous driving conditions. Roads are likely to be affected with longer journey times caused by intense ice patches. But what do the new alerts warn about incoming weather? 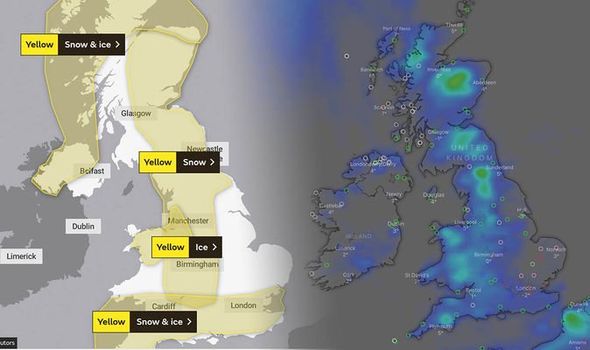 The Met Office today issued a warning advising of snow and ice which could bring disruption from later on Tuesday through Wednesday.

The warning is in force from 3pm on Tuesday to 11.59pm on Wednesday.

The warning reads: “Northerly winds will bring further showers of rain, sleet and snow across the north of Northern Ireland as well as northern and western Scotland.

“Snow accumulations will be generally confined to ground above 100m away from coasts, but some temporary slushy deposits are possible to low levels at times in any heavier showers.

“One to three cm is likely to accumulate above 100m, and as much as five to 10cm above 250m, this mostly across high ground of Scotland. Ice will form readily as temperatures quickly fall away rapidly through both Tuesday and Wednesday evenings.”