Cold weather, scattered showers and even snow and hail have hit the UK this past week, now a yellow weather warning for wind is in place for parts of Britain. The Met Office has said a deep area of low pressure will bring cold and very strong northwesterly winds.

The Met Office warning is for the Shetland Islands, and is in place from 6am on Thursday until 3pm the same day.

“Gusts of 65-75mph are expected at times, while squally wintry showers with lightning could prove to be additional hazards.”

Maps show a band of strong winds hitting across the Shetland Islands, and the forecast states Scotland will also feel strong winds. 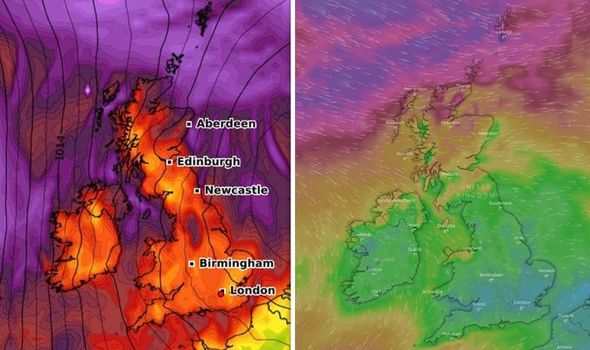 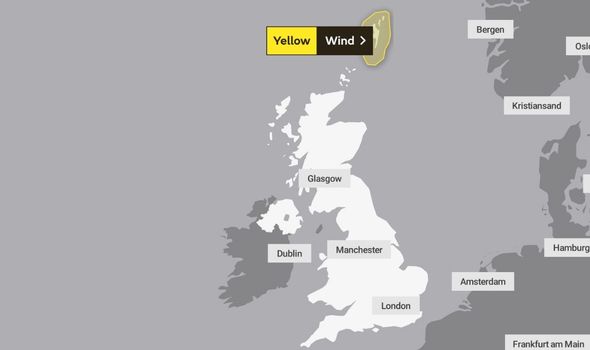 Maps from WXCharts and Windy show a band of winds hitting across much of Scotland, with strong winds also reaching to parts of Northern England.

The majority of Scotland is coloured red in one WXCharts map, showing wind speeds of around 45mph.

Also on Thursday, snow showers are forecast for Northern Scotland, with the area predicted to be cold and windy with heavy hail, sleet and snow showers.

Met Office forecaster Nicola Maxi told Express.co.uk: “Shetland is going to see the strongest winds, but we are still going to see some windy conditions in Scotland. 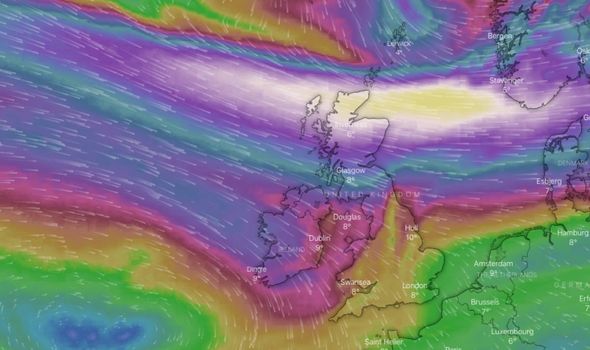 “It’s going to be windy but not ‘warnable’ levels. Edinburgh, for example, will use winds gusts of 30 to 40mph.”

Ms Maxi also spoke of the cold weather for Wednesday saying: “Looking at the forecast for today, the further north you go the colder conditions will be.

“There will be windy conditions for Shetland, but we also got some rain in the East.

“Snow could fall in parts of Scotland. It will be wintry over higher ground, with colder conditions for Scotland and Northern England.” 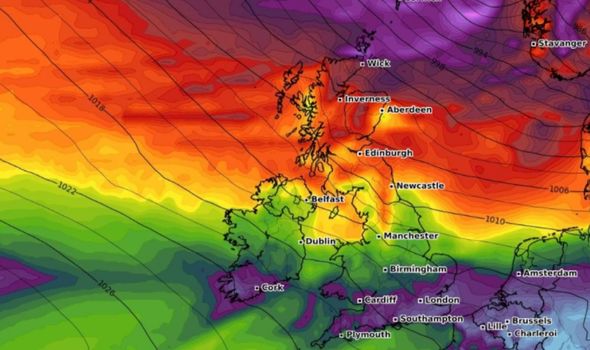 However, the cold weather isn’t due to last for long as a mini-heatwave could be on the way this weekend.

While cold weather is forecast for Wednesday and Thursday, on Friday conditions will be more settled.

This is due to the high-pressure which brought sunny skies last week returning to the UK.

On Sunday, some of London is forecast to reach highs of 19C, and Cambridge could see 18C.

He said: “There continue to be signs of warmer weather this weekend and early next week. It may then turn more unsettled from the west with an increased risk of rain.”

On The Weather Outlook’s website, Mr Gaze added: “During the weekend, winds high pressure migrates eastwards and becomes centred over the continent.

“That leads to warmer south or southwesterly flow developing.

“Temperatures are expected to rise quickly and by Sunday 20C is a possibility in the eastern half of the country.

“In the northwest, it could turn wet as Atlantic disturbances begin to push in.” 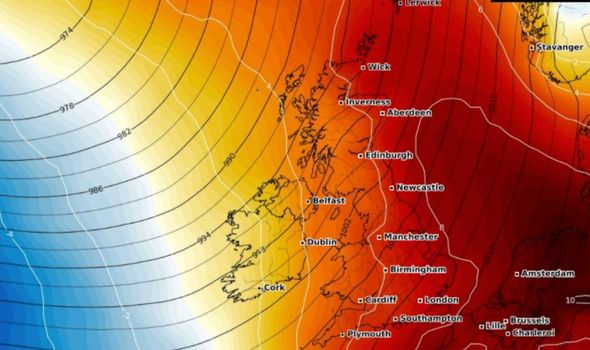 The odd light shower in central areas and some rain in northwest UK, where it will be windy.

Otherwise dry but mostly rather a lot of cloud and only occasional sunshine, after a sunny, if frosty, start in southern England.

Many parts dry with occasional clear spells, perhaps a touch of frost.

The odd shower elsewhere, mainly in the west but many parts dry, sometimes bright and a little milder.

Outlook for Friday to Sunday

In the far northwest cloudy with rain at times.

Fairly breezy, with the winds strongest across the northwest.