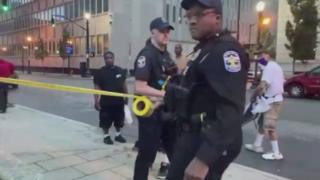 A suspect has been arrested after a fatal shooting at a protest in Louisville, Kentucky over the killing of Breonna Taylor, police said.

The suspect, who was not identified, was hospitalised and being interviewed by investigators, Police Chief Robert Schroeder told reporters.

One person died in the shooting on Saturday. The victim was 27-year-old Tyler Gerth, who was from Louisville.

The gunman opened fire from the edge of the protest area at Jefferson Square Park at about 21:00 on Saturday, Mr Fischer said, “resulting in several people firing weapons and chaos”.

The gunman who initiated the incident was injured, he added.

CCTV footage released by the police showed a man at the edge of the square raise what appeared to be a handgun and fire repeatedly into a crowd following a confrontation.

The crowd in the park was protesting over the death of Ms Taylor, a black emergency medical technician who died when police officers raided the home she was in on 13 March.

Mr Schroeder, the Louisville police chief, said at a press conference on Sunday that the suspect had participated in the protests in Louisville and had been arrested several times during previous weeks for disorderly conduct.

The suspect had been repeatedly asked by other protesters to leave the park because of his disruptive behaviour, Mr Schroeder said.

Mr Fischer said he was “deeply saddened” by the violence. “It is a tragedy that this area of peaceful protest is now a crime scene,” he said.

I am deeply saddened by the violence that erupted in Jefferson Square Park tonight, where those who have been voicing their concerns have been gathered. It is a tragedy that this area of peaceful protest is now a crime scene. 1/2

What happened to Breonna Taylor?

Ms Taylor was at home in bed in Louisville on 13 March when police officers entered her apartment shortly after midnight. The officers were executing a so-called no-knock warrant, which allows police to enter the home without warning.

Ms Taylor’s boyfriend, who has a gun license, fired shots during the incident, saying later that he thought there were intruders in the home. Ms Taylor died after being shot eight times by police.

No drugs were found in the property. A lawsuit filed by Ms Taylor’s family says the officers were not looking for her or her partner, but for an unrelated suspect who did not live in the complex and was already in custody.

Ms Taylor’s name has figured prominently in global anti-racism demonstrations sparked by the death of George Floyd in Minneapolis, with calls for the officers who raided the apartment to be arrested.

The city has since banned the use of no-knock warrants, and legislation to ban them nationwide has been introduced in the US Congress.

Chlöe Swarbrick: Hard work is no longer enough to get you a home