Teachers across Spain have joined the Clothes Have No Gender movement (#laropanotienegenero). They wore skirts whilst teaching in a bid to fight gender stereotypes after a boy was expelled for wearing a skirt to school last year. The movement began on October 27 last year when a student named Mikel Gomez was expelled and referred to psychologists after wearing a skirt to a school in Bilbao, the Basque Country.

Since then, November 4 has become ‘wear a skirt to school day’ and hundreds of students and teachers have joined the movement to show solidarity.

He tweeted a photo of himself  captioned: “20 years ago I suffered persecution and insults for my sexual orientation in the institute where I am now a teacher… many teachers, they looked the other way.

“I want to join the cause of the student, Mikel, who has been expelled and sent to the psychologist for going to class with a skirt.” 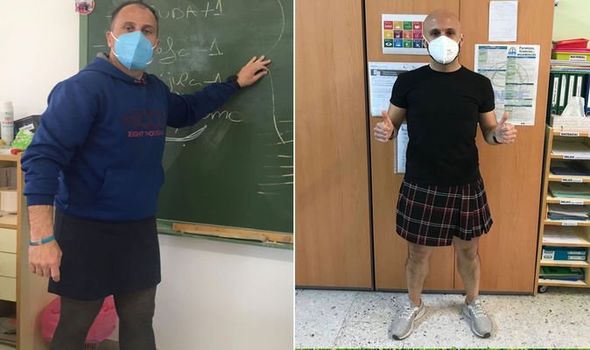 The movement has received praise from parents online. One mother wrote: “My 13-year-old son went to class with a skirt yesterday. They had agreed between several students to do so, but only he dared. I’m proud.”

Another said: “Congratulations on your attitude. High schools are sometimes very hard for students, you have to know how to be aware of it and position yourself without nuances to guarantee yourself safety from attacks.”

Others questioned whether the movement was necessary. One man wrote: “Dear Jose, I write to you with all due respect. I am neither homophobic, nor xenophobic, nor racist, or anything similar, but in my early forties the reason why boys in skirts go to high school escapes me. Maybe my social environment disguises it for me. Is it really necessary?” 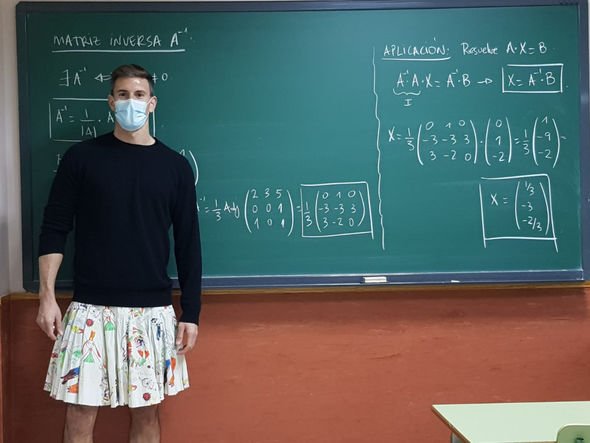 Manuel Ortega, 37, and Borja Velazquez, 36, teachers at Virgen de Sacedon primary school in Valladolid, wore skirts after a boy in their class was bullied for wearing an anime t-shirt this month.

Other pupils in his class hurled homophobic slurs at him and he ended up changing out of embarrassment. Mr Ortega was horrified and since the beginning of May has been wearing a skirt to class, along with colleague Mr Velazquez, to “promote tolerance”, Metro reports.

Mr Ortega tweeted: “A school that educates with respect, diversity, co-education and tolerance. Dress how you want! We join the campaign #clotheshavenogender.”