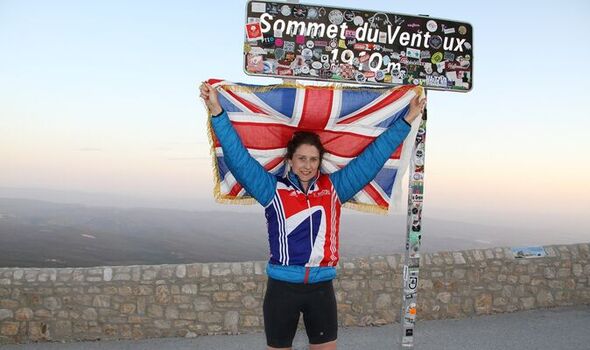 Despite only having started cycling six years ago – and also having a hip deformity – Laura, 33, took on the extreme challenge to raise money for the Duchess of Kent hospice in Reading, run by the Sue Ryder charity, that looked after her beloved mother at the end of her life.

Five years ago on May 19, 2017, Laura’s mum Christine Watson died of a rare gynaecological cancer at the age of 59. ”It was important to me to do the cycle ride on the anniversary of Mum’s death,” says Laura. ”The staff at the hospice were angels for the way they looked after her. I miss her more than words can say.” Already she’s raised nearly £10,000 in donations for the hospice and hopes there will be more.

To complete the challenge, Laura had to ride all three routes up and then down the mountain twice in 24 hours on her £500 second-hand Basso bike. She describes it as ” bonkers – like cycling from sea level to the top of Everest (8,849 metres) in one go.” After starting the ride at midnight, she was cycling for 21 of those 24 hours, taking only short power naps between two of the climbs.

Her proud dad Colin Watson drove with his supportive new partner Eileen Cowling behind Laura along the route in round-the-clock shifts shared with Laura’s friends Kerry, Marcus and Simon.

For her power naps, Colin made a bed for his daughter in the back of his car. ”At pit stops along the way, they would give me everything I needed – water, food, salt tablets and sun cream,” says a saddle-sore Laura.

”When you cycle up this mountain, the locals call you the double-crazies – the Mad Men and Women of the Windy Mountain,’ she laughs. ‘The wind at the top was so strong that it nearly knocked me over, even though I’m five foot 11.”

Laura’s triumph is all the more remarkable because of a bone spur in both hips that rubs so painfully against the cartilage that in October she’s due to have the first of two hip replacements, despite her relatively new age.

The deformity is known as an ‘impingement’ and took 12 years for doctors to diagnose, by which time she had ended up in hospital. ”The cartilage has degenerated too far for it to be repaired, so I need new hips,” she explains.

But Laura says she was determined ”to do this climb with my original body parts!”

An architectural sales manager from Leicestershire, she used to be a professional horse-rider but had to give that up as well as her hobby of netball because of her hip problem. ”I find it easier to do cycling – because it keeps your legs straight since the motion is not rotating your hips,” she says.

Her intensive training included a 200-mile ride back in Blighty before travelling to France. According to Laura, the worst part of this extreme challenge was ”the nausea. I took salt tablets to try to ward that off.”

And she admits that cycling eight kilometres in a forested area with a 10-12 gradient was ‘hellish’. She also had a big scare when a huge stag suddenly jumped up near the side of the road. ‘If there had been any roadkill, it would have been me!’ she jokes.

And on one of the ascents, the front light on her bike failed. ”It was too windy at the top to change it, so I had to descend by the light of the headlights from my friends’ truck behind me. That was a bit crazy, especially when you’re going down so quickly,” she admits. ”But although I’m not a professional cyclist, I’m so stubborn – and I never thought of giving up.

·If you would like to donate to Laura’s fund-raising for the Sue Ryder charity, go to: https://www.justgiving.com/fundraising/laura-watson64