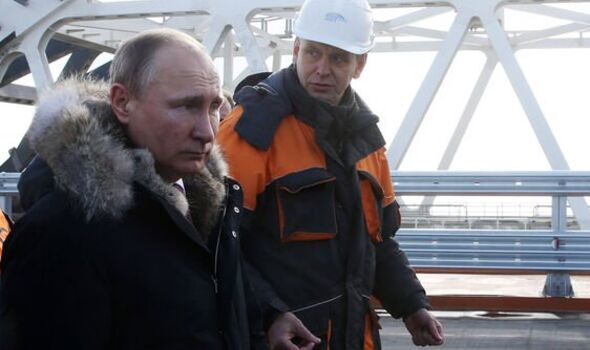 An explosion, blamed on Ukrainian special forces, destroyed part of the 12-mile rail and road link opened by the Russian president four years ago.

Greeted with jubilation in Kyiv, the damage caused by the blast will hamper Russian efforts to move troops and supplies to the battle zones in Ukraine.

Putin last night put the blame for the attack on Russia’s neighbour.

He said: “There is no doubt. This is an act of terrorism aimed at destroying critically important civilian infrastructure.”

“This was devised, carried out and ordered by the Ukrainian special services.”

The strike is the latest in a series of humiliations for Putin that have prompted some of his advisers to call for a tactical nuclear strike against Ukraine.

Washington has no indication that he has decided to use nuclear weapons, according to John Kirby, National Security spokesman to US president Joe Biden, who voiced his fears on Thursday.

He added: “Mr Putin started this war and Mr Putin could end it today, simply by moving his troops out of Ukraine.”

The attack on the £2.5billion bridge across the Kerch Strait came around 6am on Saturday when a huge fireball erupted on the rail link. The blast caused two of its concrete spans to collapse and set fire to seven oil tankers being carried on a freight train.

The train driver was killed along with two other people whose bodies were found in the water.

It is believed the damage will take several weeks to repair. But the biggest impact could be to the Russian leader’s ego as the bridge was seen as the embodiment of his annexation of Crimea in 2014.

It came as Putin was celebrating his 70th birthday.

The timing of the attack prompted Oleksiy Danilov, secretary of Ukraine’s national security council, to tweet footage of the burning bridge next to a video of Marilyn Monroe singing Happy Birthday, Mr President to John F Kennedy in 1962.

James Nixey, director of the Russia and Eurasia Programme at think-tank Chatham House, commented: “The Kerch Bridge was a symbol of Russia’s victory over Ukraine. Its partial or total destruction symbolises Ukraine’s growing ascendancy over Russia.”

Putin has ordered maximum security on the bridge and at other potential targets for Ukraine’s special forces. 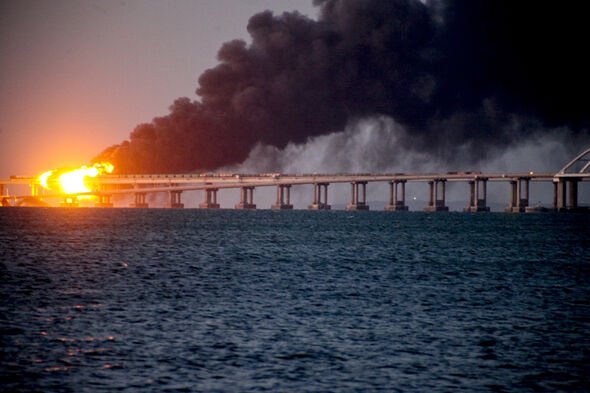 General Lord Richard Dannatt, the former head of the British Army, warned that in his rage the Russian president might order more shelling of Ukrainian civilian targets and there was an increased risk that the war “might go nuclear”.

Dmitry Medvedev, the deputy head of Russia’s Security Council, said in July that if Ukraine attacked the Crimea Bridge, Russia would unleash a “Judgement Day” scenario.

Minister, ordered the destroyed parts of the structure to be taken down.

Video shared on social media showed a long queue of vehicles at the bridge to leave Crimea towards Russia yesterday.

The images appeared to confirm that the road sections of the link are still in operation. There were reports yesterday that the rail links had also reopened.

In his nightly address on Saturday, Ukraine’s president Volodymyr Zelensky, said: “Today was not a bad day and mostly sunny on our state’s territory.”

“Unfortunately, it was cloudy in Crimea. Although it was also warm.”

Oleksiy Goncharenko, a Ukrainian MP, said: “The bridge is not destroyed but damaged, but the image of Putin is destroyed, that is the most important thing.”

Australia to subsidise wages of 6 million after coronavirus package approved