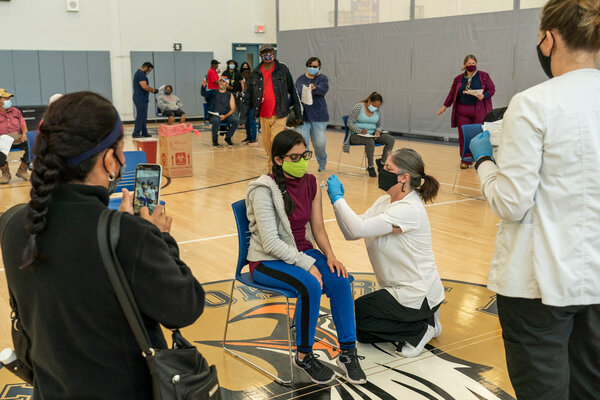 Johnson & Johnson on Friday became the third company to enter the race to expand the use of its coronavirus vaccine to adolescents. Researchers have begun testing the drug maker’s vaccine in adolescents 12 to 17 years old, the company announced.

Johnson & Johnson has been lagging its competitors. Pfizer and BioNTech announced on Wednesday that their coronavirus vaccine is extremely effective in young adolescents, perhaps even more so than in adults. Results from a similar trial of Moderna’s vaccine are expected in the next few weeks.

Pfizer, BioNTech and Moderna are also testing their vaccines in children younger than 12. Johnson & Johnson has said it would wait for results from trials in older children before following suit.

A single-shot version of Johnson & Johnson’s vaccine was authorized in February by the Food and Drug Administration for use in adults, and is now being tested on adolescent subjects. Made by Janssen Pharmaceuticals, a subsidiary, the vaccine is authorized in Canada and many other countries. But a mix-up in ingredients at a Baltimore factory may delay future shipments of doses in the United States while the Food and Drug Administration investigates what occurred.

Since September, Johnson & Johnson has also been assessing the safety and efficacy of a two-dose regimen in adults 18 and over. That study now also includes adolescents, the company said.

“The Covid-19 pandemic has had a profound impact on adolescents, not just with the complications of the disease, but with their education, mental health, and well being,” Dr. Paul Stoffels, Johnson & Johnson’s chief scientific officer, said in a statement. “It is vital that we develop vaccines for everyone, everywhere, to help combat the spread of the virus with the goal to return to everyday life.”

As of Wednesday, 30 percent of all Americans had received at least one dose of a coronavirus vaccine, and 17 percent had been fully inoculated, according to data collected by the Centers for Disease Control and Prevention.

But children under 18 account for about 23 percent of the population in the United States, and the country cannot hope to reach herd immunity — the point at which the virus begins to run out of vulnerable hosts — without protecting them, some experts have said.

How Trump impacted the fight against climate change