Slapped with a slew of cases, many in disputed Himalayan region fear the leading pro-freedom leader could be executed. 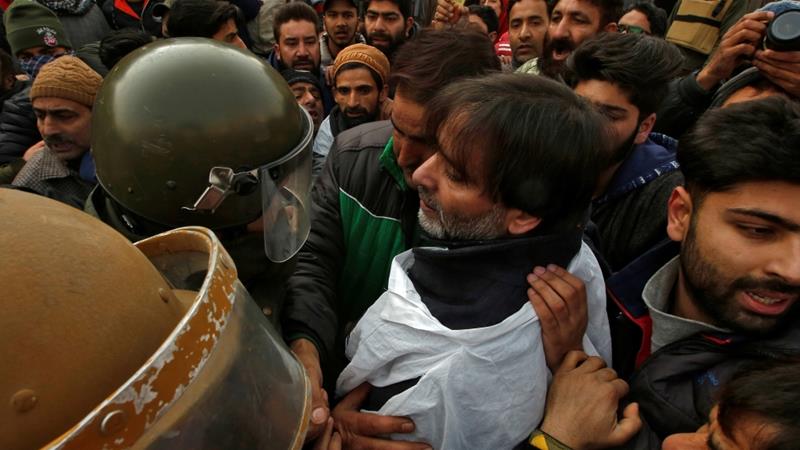 Srinagar, Indian-administered Kashmir – Imprisoned in New Delhi and slapped with a series of cases, including reopening of 30 years old murder charges, a top Kashmiri separatist leader is being denied a fair trial, his family and rights activists have alleged.

Yasin Malik, one of Indian-administered Kashmir’s prominent pro-independence leaders, is the chief of Jammu and Kashmir Liberation Front (JKLF), which was banned by the Indian government last year and declared an “unlawful association” that fomented “terrorism”.

The armed resistance against the Indian rule in Kashmir began in 1989, with a majority of people and rebel groups in the region demanding either independence or merger with neighbouring Pakistan.

Both India and Pakistan rule over parts of Kashmir territory, but claim it in its entirety. The two nuclear-armed nations have fought two of their three full-scale wars over the region.

In a controversial decision in August last year, India divided its only Muslim-majority state to create two federally-run territories: Jammu and Kashmir, and Ladakh. The move was followed by a crippling seven-month lockdown in the region and arrests of all major political and rebel leaders.

Slew of cases against Malik

Malik, 54, is lodged in New Delhi’s Tihar Jail after he was arrested by the National Investigation Agency (NIA) in a two-year-old case of “terror and separatist funding”.

When the NIA arrested him in April 2019, he was already in a jail in the disputed region’s Jammu city after the stringent Public Safety Act (PSA) was slapped on him in early March. The law allows imprisonment up to a year without trial.

Days before that, Malik was under preventive custody in a Srinagar jail following a rebel attack on a paramilitary convoy in Kashmir’s Pulwama district on February 14, in which more than 40 Indian soldiers were killed.

The separatist leader has also been charged with the killing of four Indian Air Force (IAF) officers in 1990, shortly after the armed resistance began in the Muslim-majority region.

Seven people, including Malik, were accused of killing the IAF officers in the region’s main city of Srinagar. The Jammu and Kashmir High Court stayed their trial in 1995, but that ruling was struck down by the same court in April last year.

Malik’s lawyers maintain that the charges do not stand since Malik and his accomplices were armed rebels who had announced a unilateral ceasefire in 1994.

Malik is also accused of orchestrating the kidnapping of Rubaiya Sayeed in 1989. Rubaiya is the daughter of then federal home minister and former Jammu and Kashmir chief minister, Mufti Mohammad Sayeed.

Both the cases – the killing of IAF officers and Rubaiya Sayeed’s kidnapping – are being pursued in a Terrorist and Disruptive Activities (Prevention) Act (TADA) court in Jammu by the Central Bureau of Investigation (CBI) agency.

The filing of all these cases against the leading pro-freedom leader has forced many in the disputed region to fear that the Indian state has already decided to “sign his death warrant”.

Malik’s JKLF had announced the unilateral ceasefire in 1994 after assurances of a political settlement and suspension of “militancy related cases” against him and his colleagues by the Indian state, according to an open letter he released from prison through his family last month.

“[The] first five years of present government led by PM Narendra Modi saw no militancy-related cases against me and my colleagues. But suddenly from 2019, the TADA court in Jammu started trial of these 30-year-old militancy related cases which is actually against the spirit of ceasefire pledge made in 1994,” he wrote.

In his letter, Malik also accused the judge of behaving like a “prosecuting or police officer” and being denied a fair trial.

“Though I have every legal right to be presented physically before the court, but the judge and the CBI at the behest of government are not allowing me to present myself before the trial court physically,” he wrote.

“I am being presented through video conference, where neither I am able to hear the arguments of the lawyers nor am I being allowed to speak.”

One of Malik’s family members told Al Jazeera, on condition of anonymity, that the reopening of murder cases reveals the government’s “ominous designs”.

“When you reopen a 30-year-old case and pursue it at a fast pace in a bid to hastily produce judgement, you can understand the intentions of this government,” he said. “This is a political rather than a judicial move.”

Tufail Raja, the lawyer representing Malik in the NIA’s “terror funding” case, alleged that cases are being fabricated against him.

“But he is not the one who will succumb to any pressure,” Raja told Al Jazeera.

Raja said Malik has decided that if the government does not offer him a fair trial, he will boycott it. He added that Malik’s plan to start another fast unto death – he attempted one in March but gave up after assurances of a fair trial by authorities – from April 1 was postponed due to the coronavirus pandemic.

Human rights groups in Kashmir have also accused the government of being unfair towards Malik.

“Fair trial is a globally recognised right for everyone. If you are suddenly pulling out old cases and not even allowing the accused to properly represent his case, then there would definitely be question marks over it,” Khurram Parvez, a leading activist who heads the Asian Federation Against Involuntary Disappearances and coordinator of Jammu Kashmir Coalition of Civil Society (JKCCS), told Al Jazeera.

“As of now, it seems like a political vendetta.”

Another ‘judicial murder’ on the cards?

Many people in the Kashmir valley fear Malik is next in line to be “judicially murdered” by India’s right-wing government to further their political gains. In 1984, JKLF founder Maqbool Bhat was sent to the gallows by the Indian state.

“We have seen that when it comes to Kashmiri political detainees, apart from the Indian state, even their judiciary also bypasses all rules laws and guidelines,” Faizan Bhat, a Kashmir-based independent researcher, told Al Jazeera.

“The way Yasin Malik’s case is being hastily pursued right now is leading to lot of ominous apprehensions of history being repeated.”

Former Indian diplomat Wajahat Habibullah, who had met Malik several times in the 1990s along with army and intelligence officials to persuade him to shun the violent struggle, also acknowledged speculations of him being hanged doing the rounds.

“I am not in the government, so I can’t verify or authenticate these rumours, but I expect law would be allowed to take its own course,” Habibullah told Al Jazeera.

“After being released from prison in 1994, he [Malik] had abjured violence and was not guilty of any criminal offence since then,” he said.

AS Dulat, former chief of India’s Research and Analysis Wing (RAW) spy agency, said he had met Malik in the 1990s on behalf of the government, but denied that New Delhi had reached an agreement with his organisation, the JKLF, regarding the murder cases.

“The understanding was that he would give up militancy and adopt the Gandhian path. It can be said that he stood by his words. But from New Delhi’s side, there was no agreement regarding cases of militancy against him. Those cases were never mentioned,” Dulat said.

“I don’t want to comment over speculations of him being hanged, but if he were to be hanged now after all these years, I would say it is very sad,” he said.

Meanwhile, Malik’s deteriorating health in jail during a global coronavirus pandemic has also added to the woes of his family.

“He has cardiological issues. Due to interrogations by security agencies, his heart valve had to be replaced. The current pandemic and poor conditions in jail worry us more,” a family member told Al Jazeera.