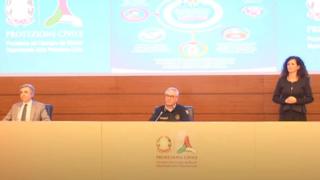 Women in Italy have demanded a greater role in the country’s official response to the coronavirus outbreak.

Italy has one of the highest coronavirus death tolls in Europe, with almost 30,000 fatalities.

Yet the Civil Defence’s daily briefings on the crisis are chaired by men, and the group of experts advising the government does not include any women.

In response, Italian women have taken to social media to call for better representation.

“We want to be able to exercise our right to be fairly represented,” the Dateci Voce (“give us voice”) Facebook page said. “Reconstruction of the country must be a project shared by women and together.”

A petition started by the group has been signed more than 4,500 times, including by MPs, scientist and researchers.

The page also encouraged Italians to post pictures of themselves wearing face masks with the hashtag Dateci Voce, which was soon trending in Italy.

No women were included in Italy’s 20-member technical scientific committee (CTS) – a group of experts advising the government during the coronavirus outbreak.

In contrast, at least 17 of the approximately 55 members of the UK’s equivalent body, Sage, are women.

The US only has two women in its 22-strong White House Coronavirus Task Force, although its high-profile response co-ordinator is Dr Deborah Birx.

Italy’s taskforce charged with the post-Covid construction of the country fares somewhat better, with four women and 13 men.

Dateci Voce points out that women have worked as doctors, nurses, researchers and other key professions throughout the outbreak.

Laura Boldrini, who posted a selfie with the Dateci Voce hashtag, was one of more than 40 deputies who submitted a parliamentary question calling on the government to “respect gender equality in the [coronavirus] task force and more generally in all decision-making bodies and at work”.

The campaign seems to have had some effect, with Italy’s Prime Minister Giuseppe Conte instructing both government ministers and advisory commissions earlier this week to bear in mind gender representation when creating taskforces.

However, the Dateci Voce Facebook page is calling for further action, urging equal representation in all of Italy’s decision-making bodies.

Italy ranks 35th globally in female representation in parliament, according to the Inter Parliamentary Union – ahead of the UK (40) and the US (81). However, it still has one of the lowest numbers of working women in Europe and all of the country’s 58 prime ministers since unification have been men.

But there have been signs of change, with seven women sworn into the country’s new coalition government last year – including to the key role of interior minister.