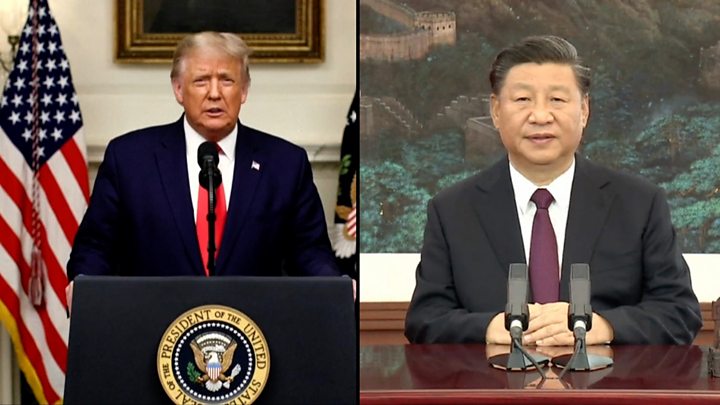 The United Nations is marking its 75th anniversary as the post-World War Two global order which created it is on shaky foundations.

Multilateralism is in serious disarray, as the former UN Secretary General Ban Ki Moon has observed.

President Donald Trump’s America First foreign policy has seen the US thumb its nose at multilateral agreements from the Paris Climate accord to the Iran nuclear deal, while China is visibly positioning itself as the new supporter of the United Nations.

But growing Chinese influence comes at a price, and if Beijing is devoting more money to fund UN agencies like the World Health Organization then it will want more say as a result.

The UN Secretary General Antonio Guterres spoke of a foundational moment facing the UN – those who built the United Nations knew the value of unity, he noted, since they had lived through war and an earlier pandemic.

Anxieties about what the US China rivalry means for global stability abounded at this remote gathering of world leaders.

There was no disguising the urgency of French President Emmanuel Macron’s tone, as he said in his pre-recorded remarks that today’s world can’t be left to the rivalry between China and the US.

That rivalry, which has seen the two countries lock horns on everything from trade to technology, is becoming increasingly acrimonious – and President Trump dialled up the rhetoric, using his platform on the world stage to rail against what he called the China virus.

With less than 40 days to go until the US election, Bejing bashing is central to the Trump campaign. It appears there is a concerted effort under way to deflect criticism of the president’s handling of the outbreak by slamming China for exporting the virus.

Would a bi-polar world in which the US and China vie for supremacy eventually lead to military conflict? Clearly the UN Secretary General is concerned about what lies ahead, warning of another “Cold War”.

“We are moving in a very dangerous direction,” Mr Guterres said. “Our world cannot afford a future where the two largest economies split the globe in a Great Fracture – each with its own trade and financial rules and internet and artificial intelligence capacities. A technological and economic divide risks inevitably turning into a geostrategic and military divide. We must avoid this at all costs.”

This open discussion about the consequences of a “great fracture ” shows how rapidly the world is changing, and how diplomats are scrambling to keep up.

China’s President Xi Jinping actually declared at the virtual general debate that “China has no intention to fight either a Cold War or a hot one with any country.”

That statement was telling. The presidency of Donald Trump has heightened tensions with China, to the point where speculation about where all this leads is rife.

An experienced diplomat told me on Tuesday that the general debate at the UN was always seen as creative chaos.

As world leaders came together and glad handed and met in private, real diplomacy was done. Now, it’s just chaos, said this old hand sadly, asking rhetorically who’s in charge, and which world leader has more than just narrow self interest at heart.

The pandemic has exploited the injustices of the world, observed the UN secretary general. People are hurting, our planet is burning, he said, imploring world leaders to see Covid-19 as a wake up call and a dress rehearsal for the challenges ahead.

Yet within an hour of Mr Guterres saying solidarity is self-interest, President Trump declared that all world leaders should follow his example and put their countries first.

If he is re-elected, his unilateralism will become more pronounced, and the United Nations will probably be further marginalised by Washington.

Would the US commitment to NATO weaken too? Were Joe Biden to be elected president, the tension between Washington and Beijing might be lessened, but the fundamental US China rivalry would remain.

The world is realigning, and the question now is how the old multilateral order adapts – and who will lead it.