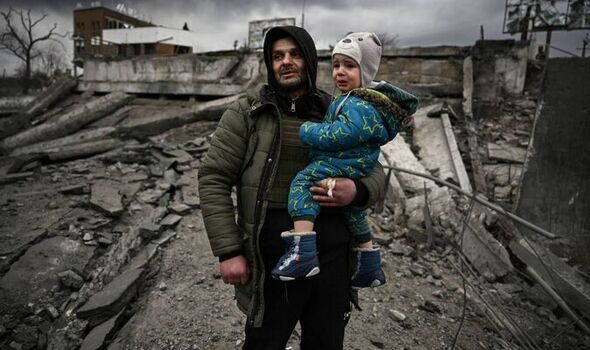 These words are considered bad language in our family. They appeared in our kids’ vocabulary after the war had started. We’ve had to run away from the bombing but I don’t want to hide my children from reality.

I’ve explained to them what the war is, who is our enemy and how innocent people are being killed every day. This is my domestic propaganda but it is based on truth.

Russia is not that delicate in the propaganda it feeds its children – and it invests a lot of effort in it. Their government is preparing the next generation to hate Ukrainians .

Efforts are under way to stop children in Crimean schools studying English. Vladimir Konstantinov, the so-called spokesman of the Crimean State Duma, said: “Why should we blindly follow the path of the English language?”

According to him, studying Russian is enough for young minds. Children in the Russian city of Kislovodsk have been given the chance of shooting at a Ukrainian dummy called “the last fascist”. The mayor explained: “We want our children to be patriotic.”

On a Russian Telegram channel, an 18-monthold toddler is pictured holding a rifle.

At a Russian primary school, children were pictured rehearsing for Victory Day. Some were told to play the graves of soldiers.

Not all Russians buy into the propaganda but even discussing the conflict can be dangerous.

Russian writer Yulia Yakovleva has recorded conversations with children age five to 17. Most of them are “against war” but they are frightened to express their opinion, she says. Some “don’t want to upset Mum”. Others don’t trust their teachers.

A friend of mine, Ukrainian singer Ivan Dorn, used to work in Russia. He says that his friends tried to challenge the narrative but all failed.

They were arrested for taking part in political rallies or writing in social media.

Russian kids are banned from watching western channels such as Netflix. I found one example of children’s “entertainment” on a Telegram channel, told as a bedtime story. A woman is explaining to children that, according to the Bible, “If people misbehave they have to be killed”.

Shocked, I go to my children. We watch Ben and Holly on TV. I need to keep their minds safe. They will soon be needed to help renew Ukraine. Olia is a Ukrainian TV star currently living in London as a refugee with her two younger children .

He’s Israel’s ‘prince of Torah.’ But to some, he’s the king of Covid.