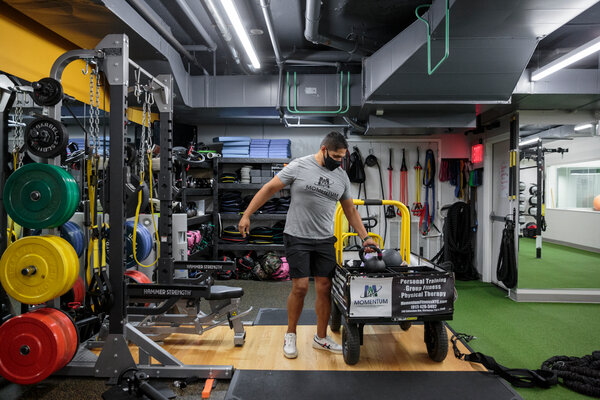 Indoor fitness classes in New York City will be allowed to resume on Monday, Gov. Andrew M. Cuomo said at a news conference on Wednesday.

New York will also lift restrictions Monday in so-called “yellow zones,” areas where the state imposed stricter restrictions on restaurants and other businesses because of troubling coronavirus data.

Only five yellow zones remained in the state as of Wednesday:two in the Bronx, one in Queens, one in Manhattan and one in Orange County, north of New York City.

In those areas, restaurants were limited to serving just 4 people at a table, and non-residential gatherings were capped at 25 people — even as the state moved to allow larger events like weddings and reopen arts and entertainment venues.

Mr. Cuomo also said that on April 5, the state would end an 11 p.m. curfew on casinos, movie theaters, bowling alleys, billiard halls and gyms. It will leave a similar curfew on restaurants, bars and catered events in place.

The announcement on indoor exercise classes came after a number of fitness studio owners protested outside City Hall on Tuesday.

When the governor ordered local governments to allow gyms across the state to reopen last September, he allowed local officials to decide whether or not to also permit the return of indoor fitness classes. Mayor Bill de Blasio of New York City declined to do so, citing fears of an increased risk of transmission in those spaces.

Last month, a group of fitness studios sued Mr. de Blasio and Mr. Cuomo for the right to reopen.

Fitness classes will be capped at 33 percent capacity, like gyms in the state, and patrons will be required to wear face coverings while exercising.

Researchers at the Centers for Disease Control and Prevention recently advised fitness centers to take a variety of measures to prevent outbreaks, including enforcing proper mask use while working out and keeping patrons six feet apart. It also said fitness facilities should ensure they have good ventilation. Gyms in New York are required to meet certain air filtration and ventilation standards.

The C.D.C. found that heavy breathing during intense physical activity in confined indoor spaces could increase chances of transmission, and fitness teachers who shouted exercise instructions to members may also have contributed to the spread. 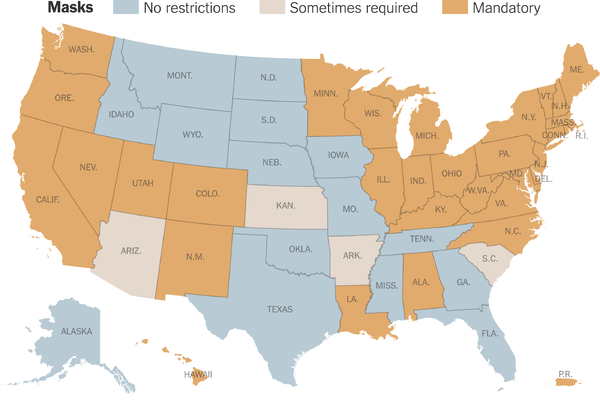 See Coronavirus Restrictions and Mask Mandates for All 50 States

The rules for businesses and residents remain a patchwork across the country as governors balance curbing the virus with boosting local economies.