Home » World News » In Seattle, a 'project' toward a cop-free world

The police left and they moved in. Trump called them ‘domestic terrorists’ and threatened to take the city back. 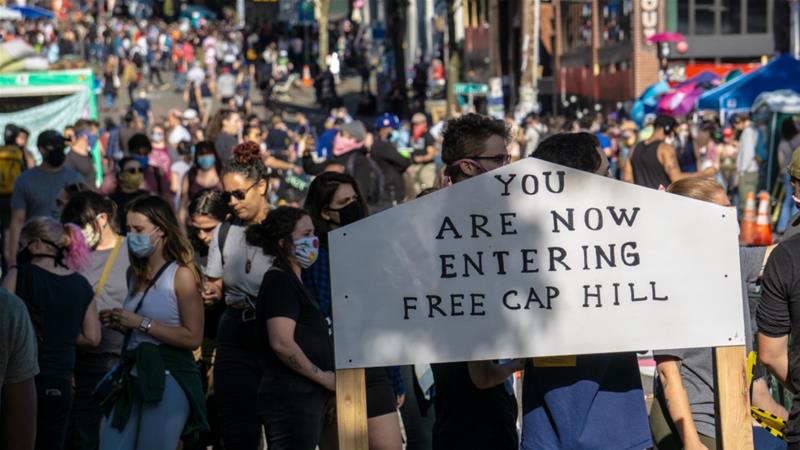 Seattle, the United States – In this Pacific Northwest city, police concluded more than a week of protests by picking up and walking away.

Demonstrators calling out a deep and prominent history of racism in the United States have filled the gap and cordoned off roughly six blocks of storefronts and a city park in the middle of Seattle in Washington state. The sign above the Seattle Police Department has been graffitied over, now reading Seattle People’s Department.

The result is a nascent commune, built through mutual aid and driven by a singular progressive message to address racism in the police. No cops may enter, and almost everything is free.

The Black Lives Matter message that has erupted in protests and police violence around the country is taking a different turn in Seattle. Some residents of the Capitol Hill Autonomous Zone, or CHAZ, as some call it, believe it’s an experiment in a cop-free world.

“We came out here to protest and while doing that we made the autonomous zone, and that just shows you how much love and unity happens when community comes together,” said Malcolm H, “and what happens if we throw money to the community and not the police force.”

Malcolm, who did not want to share his last name, is one of dozens of people who have coordinated daily life in the zone and among the dozens more who regularly speak out publicly to address violence at the hands of police. 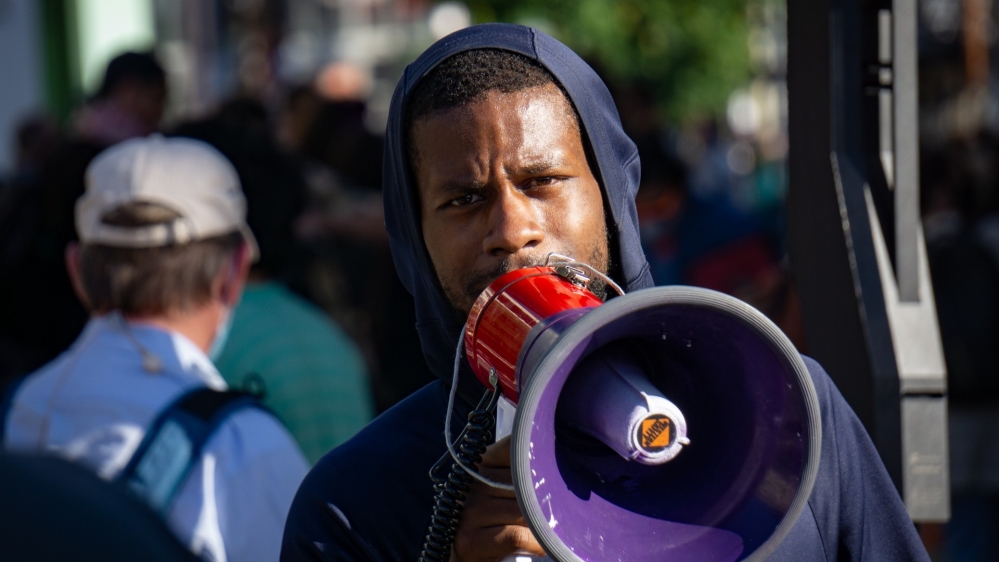 Hundreds of protesters faced tear gas and violence from police for nine days after the death of unarmed Black man George Floyd on May 25 in Minneapolis, Missouri, after a white officer pressed his knee into Floyd’s neck for almost nine minutes.

Malcolm would be a good candidate to lead the new area. He is well-spoken and has had his own experiences in prison and with homelessness. Black people in the US are disproportionately imprisoned and disproportionately homeless as a result of systemic racism.

But there are no leaders in the zone. Problems have been addressed as they come up, and regular “town hall” meetings are beginning to give structure and rules to living there.

Each night, 50 to 100 people remain in the zone, staying awake into the early hours to ensure people don’t co-opt the space for their own benefit. They sleep in tents, their cars, or surrounding apartment buildings. One night, a group of people tried to break into the police precinct, but residents say they held them back.

Hundreds more wander the zone by day. A list of the residents’ 31 demands for change in the justice system, health and human services, education and the economy are posted all over the area.

They include calls for police funds to be directed toward social services, rent control and degentrification, that hospitals employ Black doctors and nurses and that Black and Native American history be taught in schools.

“The goal of this zone is to set an example for the world, that we do not need the current police system to maintain order. We do not need a man with a gun to show up at our door every time we have a problem and call 911,” said Mark Henry, who has been staying overnight in the zone to stop looters.

“Some of the first hurdles were just making sure that we’re all here for the same goal and we’re all united.”

Those who are living in the CHAZ zone rely on donations from store owners, activists and just anyone who wants to contribute.

The “No Cop Co-op” grocery store doesn’t charge for its food or drinks, yet stock remains plenty. City officials dropped off portable toilets. On Wednesday, the second night of the zone’s inception, residents showed a documentary film on the mass incarceration of Black citizens.

In a nearby park, where some have begun creating community gardens, hundreds enjoy a brief moment of sun and discuss plans for the zone’s future. At one of two medical stations, workers trained in CPR and how to handle trauma offered basic health care to the homeless and to sex workers. 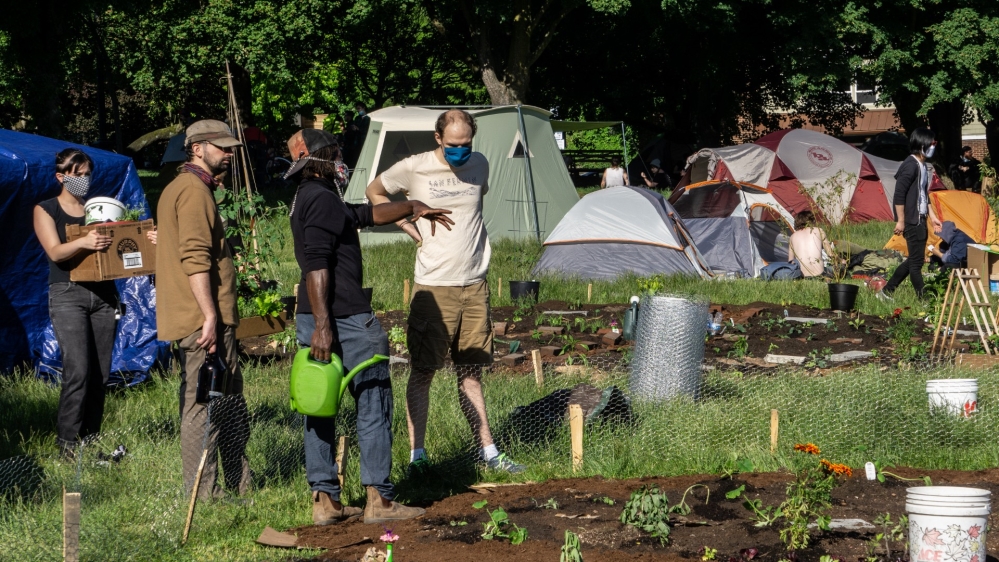 “We pulled this together when cops were tear-gassing protesters,” said Marie, a medical station worker. “Hopefully, we only ever need to be a hydrating station. But healthcare has been inaccessible, especially to Black people.”

Perhaps the most conspicuous element of the CHAZ is the Black Lives Matter mural stretched across 100 metres (328 feet) of street pavement. On Wednesday, a local painter and bar owner invited Black artists to each design their own letter. On Thursday, they worked all day to finish it before the rain.

Brandon Thomas was given a few hours to paint the “A” in “Matter”. The design he chose: a Black Power fist designed into a comb in an afro.

“When I woke up this morning, I did not think I would be part of history,” he said. He said he was especially motivated by the death of a Black man in his home state of Nebraska at the hands of a white bar owner during Black Lives Matter protests there on May 30. 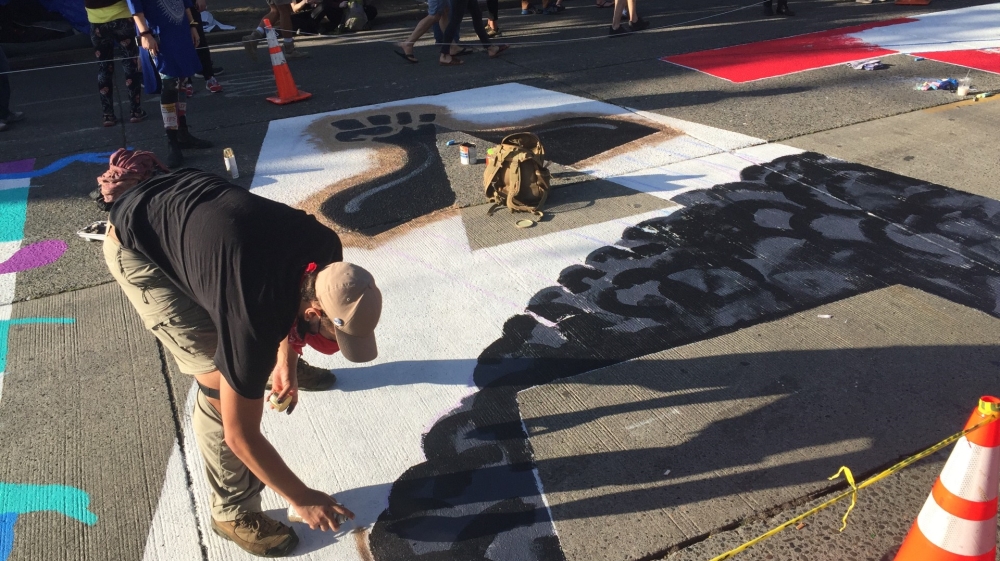 Opponents have criticised the zone, claiming it is full of anarchists. The controversy has drawn in the local police as well as US President Donald Trump, who said Seattle’s mayor and governor are failing to control their citizens.

Seattle police officials initially said there were reports of armed groups extorting businesses and passersby, but later retracted those claims. Other unsubstantiated reports of people checking identification when entering the zone have also been denied by demonstrators.

Trump has called it a “Seattle takeover” labelling residents of the zone “Domestic Terrorists”.  He directed the governor and mayor to “Take back your city NOW. If you don’t do it, I will”.