But instead they are wading through water as the Greenland ice sheet lost a staggering one million tons per minute in 2019 – the worst loss in centuries. Satellite data shows the scale of its destruction is heating the Arctic at double the rate in lower latitudes. The melting ice cap has had a major impact on the rising sea levels with the ice sheet shrinking by 532 billion tons last year as glaciers fell into the sea. 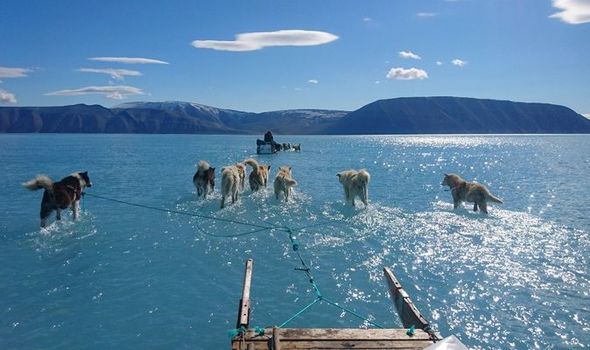 Data has been collected since 2003 and the devastating 2019 loss was the double the annual average of 255 billion tons – the majority was lost during July 2019.

Scientists blamed it on “blocking patterns” of weather that kept warm air over Greenland for longer periods. Ingo Sasgen, of the Alfred Wegener Institute, in Bremerhaven, Germany, who headed the analysis, said the melt was “not very surprising, because we had other strong melt years in 2010 and 2012 and I expect we will see more and more”.

It is predicted that if the entire Greenland ice sheet melts, the sea level would rise by 19 feet.

Belarus activist refuses authorities’ attempt to force her out of country