The disturbance which became Tropical Storm Cristobal first developed as a depression over the Bay of Campeche in the southwestern Gulf of Mexico on Monday, June 1.

This was actually the first official day of hurricane season, but named storms had occurred in the weeks previous – marking this season as already highly active. 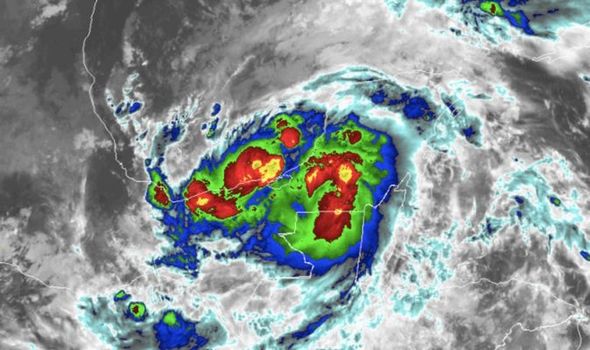 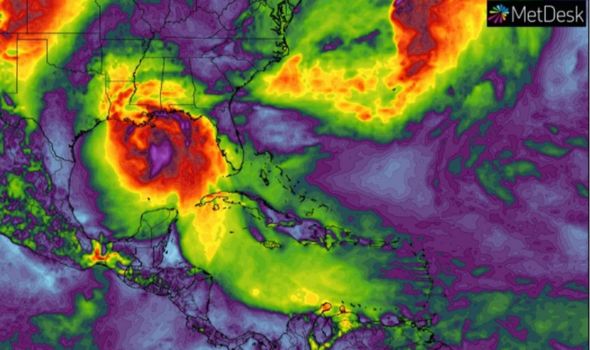 The National Hurricane Center (NHC) confirmed Cristobal made landfall in the state of Campeche near Atasta, Mexico, and just to the west of Ciudad del Carmen at 8:35am CDT (2.35pm BST) on Wednesday.

The storm’s maximum sustained winds were 60 mph with higher gusts recorded, and further impacts from Cristobal are expected.

Cristobal is forecast to travel in a loop over land in southeastern Mexico as it straddles 83F (28C) waters of the Bay of Campeche into Friday.

As of the NHC’s 4am CDT (10am BST) advisory, Cristobal was located around 60miles southeast of Ciudad Del Carmen in Mexico. 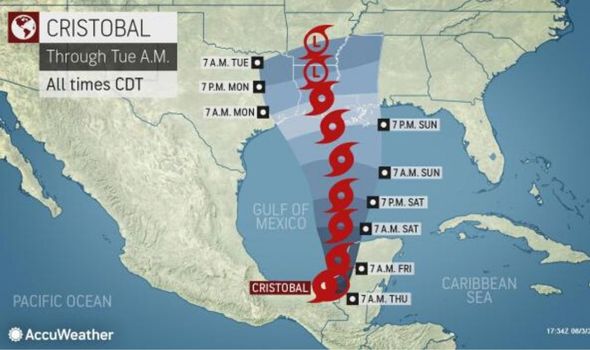 Cristobal is moving toward the southeast near two mph, and this motion should continue this morning.

AccuWeather meteorologists have predicted up to 30 inches of rainfall in Mexico, before Cristobal goes on to head towards the United States.

Dan Kottlowski, AccuWeather’s hurricane expert said: “There is a small chance the system will break up over southern Mexico late this week, but the more likely scenario is for the storm to survive, move back out over the warm waters of the central Gulf of Mexico, reorganise, strengthen and turn northward toward the US from Friday night to Sunday night.”

Today, Cristobal could weaken to a tropical depression according to forecasters, and its path across Mexico will determine any further impacts.

If Cristobal moves a southwards over Mexico, it will interact with hills and mountains over the region.

This, in turn, could make the storm “unravel” Mr Kottlowski said, adding this would make “it more difficult for it to recover once it starts to move back northward.”

However, there if the storm remains close to the coast and to the source of moisture “it will retain its circulation and is more likely to rebound faster once turning northward at the end of the week.”

Mr Kottlowski said: “Forward motion of Cristobal will be slow initially, but the system is likely to gain forward speed later this weekend. 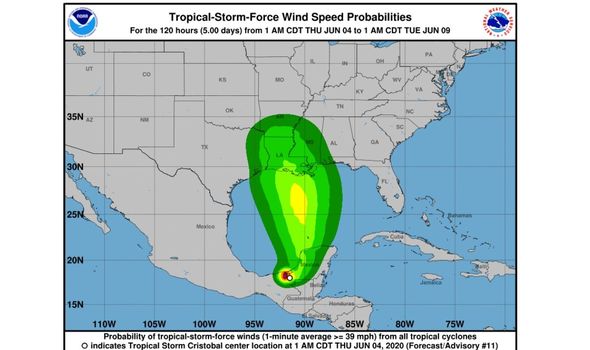 “Provided Cristobal does not get beaten down too much by interaction with Mexico, there is a chance the storm strengthens to a hurricane over the central Gulf of Mexico later this weekend, prior to reaching the US.”

Maps of potential impacts show if Cristobal does strengthen in the Gulf of Mexico and track towards the USA, Houston and New Orleans are potential targets.

Those in areas at risk of hurricanes this hurricane season are being asked to prepare, as the COVID-19 pandemic threatens to make any weather event harder to both prepare and recover from.

Carlos Castillo, acting deputy administrator for resilience at FEMA issued a statement when NOAA made its forecast for the season on May 24th.

Mr Castillo said: “Social distancing and other CDC guidance to keep you safe from COVID-19 may impact the disaster preparedness plan you had in place, including what is in your go-kit, evacuation routes, shelters and more.

“With tornado season at its peak, hurricane season around the corner, and flooding, earthquakes and wildfires a risk year-round, it is time to revise and adjust your emergency plan now.”

In 2019 there were 18 tropical storms, of these six became hurricanes, and three were classified as major hurricanes – reaching category three and above.

Every adult in UK could receive Covid-19 vaccine by Easter, scientists claim

When are First Fridays coming back to Denver? Soon — The Know