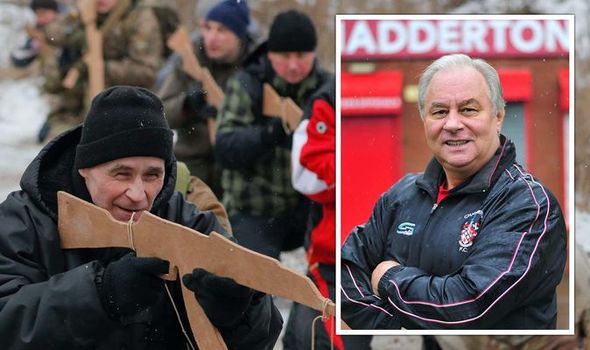 Despite their stoicism, however, there are signs the current crisis carries a much greater risk which could leave Eastern Europe’s largest country a failed state.

While the cafes in Kyiv were still bustling last night, sources told of increased stockpiling of petrol and food in anticipation of an attack.

Moscow’s response to demands by both the US and Nato did little to allay fears.

“There is no positive reaction on the main issue,” said defence minister Sergei Lavrov on Friday.

“The main issue is our clear position on the inadmissibility of further expansion of Nato to the east and the deployment of strike weapons that could threaten the territory of the Russian Federation.”

Recent disclosures, such as the transportation of Russian blood supplies to the front and the movement of 40 mobile radio stations in Voronezh caused one Ukrainian last night to say: “I don’t know whether Russia is preparing for war but, if it were, it would look a lot like this.” Meanwhile, UK sources in Ukraine have described the “rising tempo”.

“I asked someone in Kyiv if they were OK. They said yes, as long as there’s no war – that’s a stark departure from even two years ago,” said one last night.

Sergej Sumlenny, a Russianborn analyst who recently spent six years in Ukraine, said he was being inundated by calls for advice. “People have been living in a state of war for eight years and most are trying just to continue as normal,” he said.

“But I am getting many calls from friends in Ukraine who are very worried.

“One, a 30-year-old mother of a seven-year-old daughter, asked me what she should stockpile and whether she should leave her apartment in a western city to live with her mother in the provinces.

“Others have asked me whether they should empty their bank accounts. The fears are very real.”

With borders in Poland, Slovakia, Hungary and Romania expected to close in the event of an invasion, Ukrainians will have little option but to stay put and face what may come.

Mr Sumlenny, who served with Russian forces before joining a think-tank critical of Vladimir Putin’s policies, added: “My advice was to stay put but to stock up on petrol and water – petrol will be the first thing to go, and once the pipes go, her apartment will have no water to flush the toilet. You don’t need 20 kilos of supplies if you can’t stay in your flat because it has no water.”

Ukrainians in Britain spoke of their concerns for loved ones.

“We are very worried about the troops to the north,” said Petro Rewko, chair of the Association of Ukrainians in Great Britain, adding that it was “difficult to remain optimistic”.

There could be a massive humanitarian disaster if Mr Putin invades. “I’ve spoken to my relatives and it’s true that people are getting ready with their suitcases to flee if the Russians invade.

“We are hoping the diplomacy that is taking place to avert a major conflict is successful.”

During a call with US president Joe Biden, he is said to have reacted to warnings that invasion was imminent by responding that the threat remains “dangerous but ambiguous”, and it is not certain an attack will take place.

In a public statement later, he added: “We are grateful to the US for the support for our independence and territorial integrity, but I am the president of Ukraine, I am here and I know more details and have deeper knowledge than any other president.”

He had already objected to the drawing down of US and UK embassy staff, calling it “a mistake, wrong overreacting steps that do not help us”, and adding: “It is not the Titanic here.”

Kyiv confirmed his main concern was the collapse of Ukraine’s economy. According to many Ukrainian government officials, borderline “hysteria” has already squeezed Ukraine out of market borrowing, prompting Kyiv to call for a $5billion aid package from friendly countries and institutions.

“The extra billions we can spend on the army won’t help if we lose balance and economic stability,” defence minister Oleksii Reznikov told parliament.

Mr Sumlenny said: “Putin has already won in this regard.”

Though there are concerns that a 240km stretch of Ukraine’s frontier with Belarus, at Chernihiv Oblast, remains defended by just barbed wire, Mr Putin has options at his disposal other than a land invasion. Mr Sumlenny, a reservist with the Russian army specialising in psychological warfare before he left the country, said: “Ukraine’s forces have never been better prepared for ambush.

“Knowing Russian military doctrine as I do, I believe they won’t risk giving the Ukrainians the opportunity to use US Javelins and British next generation light anti-tank weapons to burn their tanks. But Russia knows Ukraine has little in the way of anti-air defences.

‘It is remain “They could adopt techniques they employed in Syria, to use air power to carpet bomb cities, destroy dams, chemical plants and vital infrastructure.

“The destruction of just one dam on the Dnieper river would be enough to obliterate a couple of cities. And let’s not forget its nuclear power plants.

“I am worried. It would just take 100 Kalibr missiles to destroy Ukraine’s economy. It would be devastating. If Putin’s aim is to reduce Ukraine to a failed state, what better way is there?”

Bob Sopel, 70, who chairs the Manchester branch of the Association of Ukrainians in Great Britain, said: “What Putin is doing is crazy. When we became independent we were the third-largest nuclear power in the world. Then negotiations took place for the removal of our nuclear deterrent with the UK, France, USA and Russia in return for our sovereignty being respected. Now we have the Russians doing this.

“We’ve just celebrated 30 years as an independent country and we celebrated our Christmas just weeks ago. We’ve had threats hanging over us over a long time.

“No one wants to go back to being in the Soviet Union, and I’m sure Ukrainians will fight to keep their independence, but it could be a bloodbath’.”

Heather Du Plessis-Allan: Were being held hostage by the unvaccinated