Home » World News » How did you lose it? Russian TV presenter slams loss of flagship Moskva 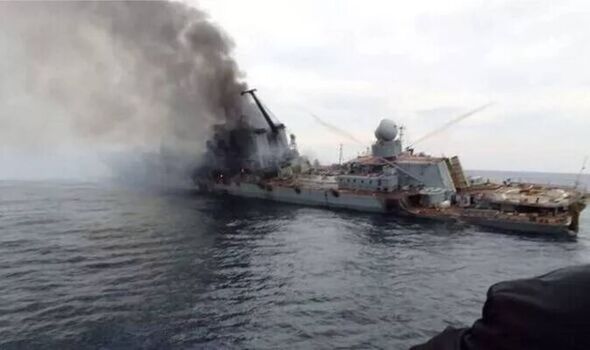 Russian TV presenter Vladimir Solovyov – known as “Putin’s voice” – slammed the loss of the Moskva, the flagship of the Black Sea Fleet.

The sinking of the Moskva is the biggest single humiliation for the Russian war effort, in a campaign that Vladimir Putin hoped would see him seize Ukraine within days.

The TV rant came as the first images emerged of the Moskva after it was hit with Ukrainianmade Neptune missiles last week.

The pictures, which seem to have been taken from a rescue vessel alongside the stricken Russian warship, show damage to its left side along with flames burning below deck and a thick pall of black smoke rising into the sky.

The Moskva is shown sitting low in the water, leaning to the port side, and appears to have deployed its lifeboats, with no crew visible on board.

Mr Solovyov said in a nationwide broadcast: “I am furious about what happened to the Black Sea Fleet’s flagship, Moskva.

“I am simply furious. And, yes, we say it was quite old, and went through repairs and, yes, this series of ships has vulnerabilities.

“I get it. But tell me this – how did you manage to lose it?

“Explain to me, why the hell you were in that particular area of the Black Sea at that time?”

There are suggestions that Vice Admiral Igor Osipov, commander of the Black Sea Fleet, has been detained or suspended over the loss of the flagship.

Mr Solovyov added: “And I don’t care what exactly happened. If, indeed, it was the two Neptune missiles as the Ukrainians said.

“Anyway, since when was a combat ship scared of a missile strike, since it has a defence system?

“So, was something not activated? Okay. Even if it was hit with two missiles, and it ignited the ammunition – what happened to your fire fighting system?”

The loss of the missile cruiser could also pose a serious challenge to Russia’s plans to hold ground in southern Ukraine and potentially attack Black Sea port Odessa.

Military chiefs were using the ship as a command and control vessel for operations.

The Russian military has also been slammed by relatives of those who were on the vessel.

Dmitry Shkrebets, whose son Yegor was on board, said: “We were contacted by three families from Yalta, Alupka and St Petersburg, whose children are also missing, also conscripts.

“It was reported by Russian state media that the entire crew had been evacuated. It is a lie. A blatant and cynical lie.

“Keep thinking for yourselves. I, Dmitry Shkrebets, the father of this conscript Yegor Shkrebets, ask everyone who is not afraid and not indifferent.

“Spread this appeal of mine wherever you have the opportunity so that the b******* do not hush up this terrible tragedy.

“I will devote my whole future life to ensuring that the truth wins in this story. A man whose son was taken away in such a vile way is not afraid of anything.”

Yegor’s mother Irina Shkrebets said that she went to a hospital in Crimea over the weekend, where she saw about 200 Moskva sailors with severe burns.

She said: “I saw every kid who got burns. I can’t describe how tough it was but I didn’t find my child.

“There were 200 people at the hospital, while there were more than 500 people on the cruiser.

Where’s the rest of them?” Mrs Shkrebets said local security officials have rejected her pleas to see the list of those killed and missing from the Moskva.

After the cruiser was sunk, she said: “We went to the unit. The commander came out, threw up his hands and said, ‘I won’t tell you anything.’ I said, ‘Where is my son?’ And he said, ‘Well, somewhere in the sea.'” The ship had an estimated crew of around 510 people.

Another mother, who asked not to be named, said: “Most of the wounded have limbs torn off, because of the explosions from both the missiles and the detonated ammunition.”

Another, Yulia Tsyvova, wept as she told how she has spent days trying to find out what happened to her son.

She said: “He was only 19, he was a conscript. They didn’t tell me anything else, no information on when the funeral would be. I am sure he isn’t the only one who died.”

An anonymous survivor is said to have broken down in tears as he told his mother how at least 40 crew members were killed during the attack, with “many missing” and maimed.

The unnamed mother said: “My son was crying when he called me to say what he saw. It was terrifying. Clearly not everyone made it alive. He said he’d never think he would end up in such a mince-grinder in peacetime.

“My son said the cruiser was hit from the land, from the Ukrainian side.

“There are people who were killed, wounded and missing.

“Please understand me, I am terrified. I am petrified, and I don’t know how I will wait for my son to return.”

She claimed the Defence Ministry was stopping survivors from going home. She added: “I’ve no idea how I’ll live through this while waiting for my son to return, waiting for him to finish his service. It’s awful.

“The Ministry of Defence doesn’t want to admit defeat by Ukraine.”