New school meal standards? Help for small farmers? Maybe, but first the new administration has to deal with hunger, food safety and a diminished U.S.D.A. 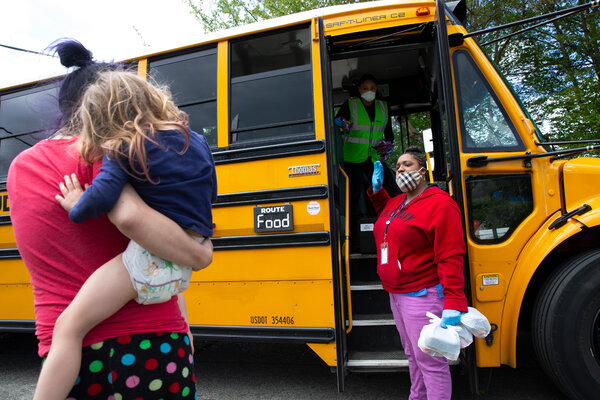 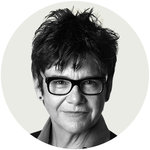 The transition memos from the left flank of American agriculture began piling up almost as soon as Joseph R. Biden Jr.’s presidential win was clear.

There were pleas small and large. Fix the rules for raising organic livestock, and reverse the department’s track record with Black farmers. Restore school food standards and strengthen G.M.O. labels. Prioritize the climate crisis. There was even a suggestion to change the name of the U.S. Department of Agriculture to the Department of Food and Well-Being.

The chef Michel Nischan is among those who have spoken with the Biden transition team about nutrition and farming policy. His food-advocacy résumé goes back to the first Bush administration. It was his idea to double the value of food stamps for fruits and vegetables, a notion that has grown into a national program.

He has a message for his fellow food warriors, many of whom say their issues were shoved back several squares on the game board under former President Donald J. Trump: The Department of Agriculture is an understaffed agency facing staggering hunger and safety challenges brought on by the pandemic. Repair needs to happen before reform.

“It’s like, we know you want us to jump from serving meat to going vegan,” Mr. Nischan said. “But man, we got to get the stove fixed first.” 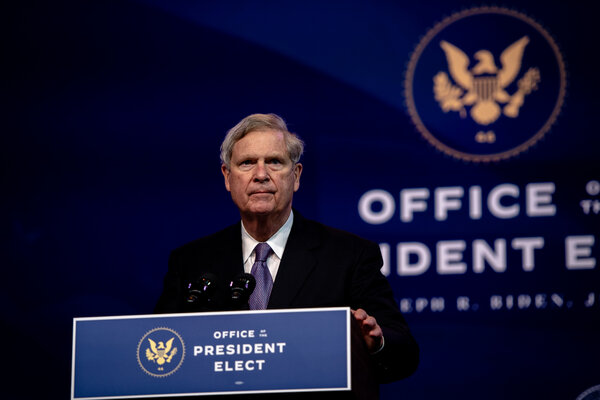 Tom Vilsack, who was agriculture secretary in the Obama administration and is likely to be confirmed by the Senate for another turn, said in an interview on Friday that he has already sketched out his agenda.

“There are probably five very, very large challenges ahead that have to be dealt with very quickly,” he said. Topping the list is protecting Agriculture Department employees and people who process the nation’s food from the virus, and figuring out which land-grant universities, government laboratories and other department offices might be able to store and administer vaccines.

Hunger relief is a pressing issue, as are two of his boss’s other priorities: promoting social justice and fighting climate change.

Next comes propping up regional food systems and helping farmers. “Once we get a bit on the other side of the virus itself, then we have the important business of revitalizing the rural economy that has been hit by this,” Mr. Vilsack said.

Mr. Vilsack is returning to a vastly different department from the one he ran in the Obama era, when it landed on the Forbes list of America’s best employers. Morale is low and many positions are unfilled, especially in agencies that provide the data and scientific research on which policy decisions are made.

“Mentally and emotionally, the career staff is just devastated,” said Sam Kass, the White House chef who became President Barack Obama’s senior nutrition adviser and has spoken with Mr. Vilsack about his agenda. “They need to start steadying the ship.”

Disciples of the good-food movement, which promotes healthful, local food grown in environmentally friendly ways by people who receive fair pay, say that by necessity, many organizations grew stronger during a Trump administration dedicated to agribusiness and factory farming. They’ve had to find ways to be innovative without support from the huge federal food agency.

The Agriculture Department, with a budget of $153 billion and nearly 100,000 employees, runs 29 agencies and offices whose jobs range from feeding the poorest Americans and regulating what public schoolchildren eat to managing forests and helping farmers sell commodities like soybeans abroad.

Progressive food policy at the federal level had been on a slow but steady rise since the Clinton administration, when the California chef Alice Waters began urging the White House to improve school food and install a White House vegetable garden; when the first national organic standards were introduced; and when the department’s attention to civil-rights issues sharpened.

When Mr. Trump arrived at the White House, his supporters joked about turning the garden into a putting green. His agriculture secretary, Sonny Perdue, moved the department’s largest science-based research agencies, the Economic Research Service and the National Institute of Food and Agriculture, from Washington to Kansas City, Mo. Whether by design or by default — many employees resigned rather than move — the staffs were gutted, limiting the agencies’ effectiveness.

Mr. Trump became a champion in many rural communities, easing regulations, and paying farmers when his tough trade policies and the pandemic hurt sales.

“In my over 40 years of covering the business of agriculture from Washington have I ever seen a president talk about agriculture and trade policy as much as our president,” Jim Wiesemeyer, a Farm Journal Washington correspondent, said in an interview with the magazine.

But the mood was bleak on the other side. “Looking back on it, it was pretty brutal,” said Laura Batcha, the chief executive officer of the Organic Trade Association, which represents a $50 billion segment of the food industry. “The root of it was a hyper-anti-regulatory agenda with no respect for organics or other forms of sustainable agriculture.”

Some, like Ms. Batcha, are putting their faith in Mr. Vilsack, who most recently was the top executive at a global trade group for the dairy industry.

Others consider him a retread, without a fresh, progressive view of how to improve the food system. Not all agribusiness and commodity farmers are happy, either. Many were hoping the job would go to Heidi Heitkamp, a former senator from North Dakota with deep connections to rural issues. Fighters for social justice and environmental issues campaigned hard for Marcia L. Fudge, a congresswoman from Cleveland whom President Biden eventually nominated as secretary of housing and urban development.

In Mr. Vilsack, the new president went with experience, seeking someone who could immediately get to work on pandemic-related safety and nutrition issues. The number of Americans who face hunger rose by some estimates to more than 50 million in 2020, from about 34 million in 2019.

On Friday, President Biden signed an executive order that would increase both the amount federal food assistance for about 12 million people who use the Supplemental Nutrition Assistance Program, (also known as food stamps), and the grocery money given to families with school-age children. He has also included more money for food stamps and other federal feeding programs in his proposed $1.9 trillion stimulus package.

“Of all the issues we face in this country, to me hunger is the most solvable,” said Billy Shore, the founder and executive chairman of Share Our Strength, which works to end childhood hunger in the United States. “We are so focused on shortages of vaccines or tests. There is no shortage of food in the country or food programs. I think it’s a moment of enormous opportunity.”

Public schools have been scrambling to feed students even when the pandemic has kept them home, which has renewed a call for universal school meals. The idea is to eliminate the administrative complexities of the $18 billion program, and make healthy food available to all students regardless of their family’s income, in the way bus rides or textbooks are. (Under a Covid-related order from the Trump administration, all children have temporary access to free school meals through the end of the school year.)

The department could help heal political divisions by making it easier for schools to use locally grown food and make meals healthier, said Curt Ellis, the chief executive officer of FoodCorps and among a group pushing for a White House summit on child nutrition during Biden’s first 100 days.

“That kind of local economic development is really popular in rural red-state communities, as well as blue-state urban communities,” Mr. Ellis said, adding that the school-nutrition professionals he works with have been making progress despite the Trump administration policies.

“The question now is how much can we accomplish with the wind at our backs,” he said.

The pandemic has shown how fragile the food-supply chain is, Mr. Vilsack said, and has underscored the need to open more regional and local markets and increase the number of meat processors so the country isn’t so reliant on a handful of plants.

Changes that many people thought were decades away, like universal school meals, stronger urban-rural supply chains and e-commerce for agriculture, have accelerated during both the pandemic and the Trump administration, said Krystal Oriadha, the senior director of policy and programs at the National Farm to School Network.

Farmers, cooks, environmentalists and anti-hunger advocates — groups often pulling in different directions — were forced to strengthen relationships based on intersectionality and a new understanding of how interconnected and vulnerable the food system is.

“This is a new moment, with a new generation of voters putting pressure on ideas around environmental and racial-justice issues like we haven’t had before,” she said. “For the first time, we can all see ourselves in this.”

Even Ms. Waters, the chef who has long relied on relationships with high-level politicians to advance her quest to improve children’s education through gardening, is working closer to home now. She is lobbying the University of California to replace its food procurement system with one based on a network of local farms as part of its global food initiative, and to include food in the university’s ​aggressive carbon-neutrality plan.

In a recent interview, Ms. Waters said that despite the change in administrations, she has given up on looking to Washington for solutions to what she sees as a broken food system.

“If we have one-idea-fits-all at the national level, it just gets watered down,” she said. “I can’t think nationally anymore. I need to act locally. I need to go where the doors are open.”