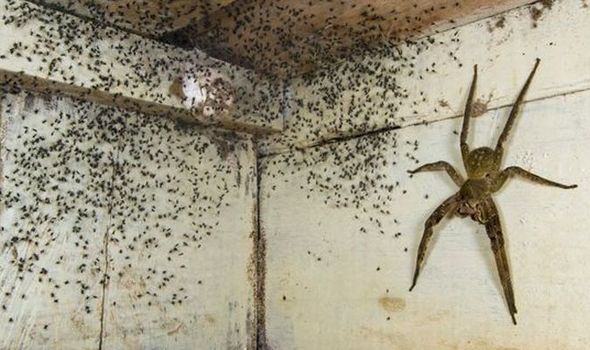 Gil Wizen spotted tiny spiders all over his bedroom at a reserve in Napo province of eastern Ecuador. The photographer looked under his bed to see where they were coming from and discovered a Brazilian wandering spider with hundreds of its offspring.

Mr Wizen took a photo of the arachnid before moving it outside.

The image, titled The Spider Room, won him a Wildlife Photographer of the Year award for Urban Wildlife.

The spider is the size of a human hand and Mr Wizen used the forced perspective technique when he took the picture to make it look even bigger.

A virtual awards ceremony for Wildlife Photographer of the Year was held at the Natural History Museum in central London on Tuesday.

French biologist and underwater photographer Laurent Ballest was named as this year’s Wildlife Photographer of the Year.

Over the past five years, Mr Ballesta and his team returned to the lagoon, diving day and night so they did not miss the annual spawning that only takes place around the full moon in July.

His picture was selected from more than 50,000 entries from 95 countries.

Chairwoman of the judging panel, writer and editor Rosamund “Roz” Kidman Cox, said: “The image works on so many levels.

“It is surprising, energetic and intriguing, and has an otherworldly beauty.

“It also captures a magical moment – a truly explosive creation of life – leaving the tail-end of the exodus of eggs hanging for a moment like a symbolic question mark.”

Meanwhile, Vidyun R Hebbar was named Young Wildlife Photographer of the Year 2021 at the ceremony.

The two winners were chosen from 19 categories in total which aim to celebrate the natural world.

A total of 100 images from the competition will be on display at the Wildlife Photographer of the Year exhibition at the Natural History Museum.

It opens on October 15 before touring across the UK and internationally.