The USGS has issued a red warning. A report said: “Shortly after approximately 9.30pm HST, the USGS Hawaiian Volcano Observatory (HVO) detected glow within Halemaʻumaʻu crater at the summit of Kīlauea Volcano.

“An eruption has commenced within Kīlauea’s summit caldera.

“The situation is rapidly evolving and HVO will issue another statement when more information is available.” 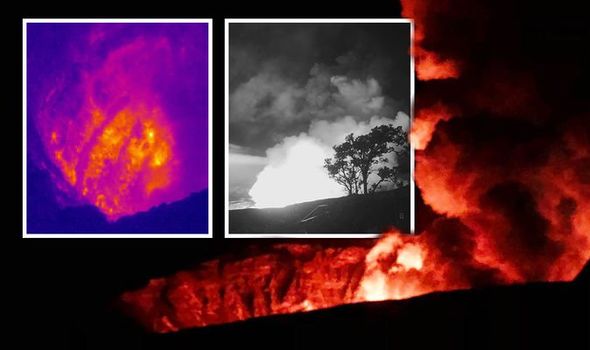 We will use your email address only for sending you newsletters. Please see our Privacy Notice for details of your data protection rights. Earthquake swarm strikes fault formed after last Yellowstone eruption

A red warning means eruption is imminent with significant emission of volcanic ash likely, or that an eruption is underway.

The region has been hit by dozens of earthquakes in recent days, with the most recent being a magnitude-2.7tremor on December 20 at 9.58pm local time (GMT-10), which struck 6 miles eats of Pahala.

This was preceded by a further 19 earthquakes on December 20, all above magnitude-2.0.

The USGS said the volcano had seen an increase in “long-period seismic signals beneath Kīlauea’s summit, which are attributed to magmatic activity”.

The report added: “Whereas this type of seismicity was observed on average once every few weeks following the 2018 eruption, rates have increased to over a dozen in the past several days.

“Other monitoring data streams including volcanic gas and webcam imagery were stable until this eruption.

An earthquake swarm began on the evening of December 20, accompanied by ground deformation detected by tiltmeters. An orange glow was subsequently observed on IR monitoring cameras and visually beginning approximately 21:36 HST.”

A special weather statement was issued by the National Weather Service Honolulu, which reads: “Web cams and radar data indicate a strong eruption has occurred at Halemaumau Crater.

“Low level trade winds will push any embedded ash toward the southwest, and any ash fallout will likely occur over the Kau District and Highway 11 southwest of the town of Volcano.

“This includes the communities of Pahala, Wood Valley, Naalehu and Ocean View.

“Avoid excessive exposure to ash which is an eye and respiratory irritant.

“Those with respiratory sensitivities should take extra precaution to minimize exposure.”

The Kilauea volcano is situated within the Hawaii Volcanoes National Park, and is the youngest and southeastern most volcano on the Island of Hawaii.

This is a breaking story, refresh for updates.