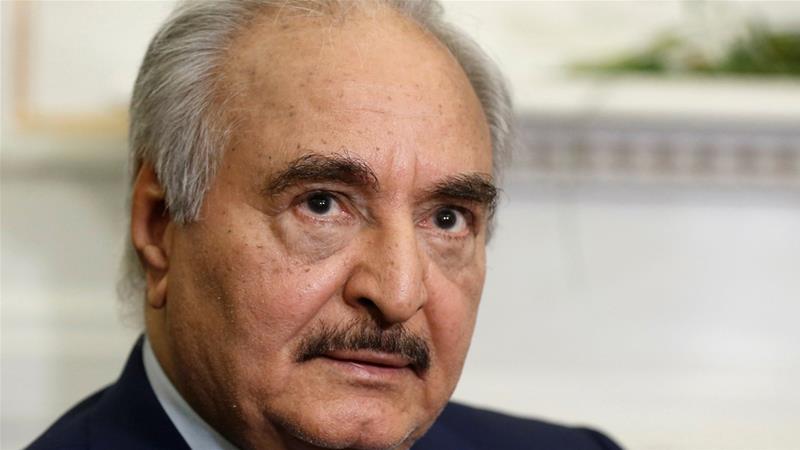 Libya’s eastern-based renegade military commander Khalifa Haftar has declared a landmark 2015 United Nations-brokered agreement to unite the country “a thing of the past”, and pledged his authorities would move towards creating a new government.

“The political agreement destroyed the country. We will work to create the conditions for building permanent civic institutions, he said in a televised speech on Monday.

Haftar did not make clear whether an elected parliament in the country’s east – under whose jurisdiction his forces nominally fall – backed his move, or what its future role would be.

In April 2019, Haftar launched a military campaign to wrest control of the capital, Tripoli, but the offensive has largely been stalled by forces loyal to the Government of National Accord (GNA).

Haftar receives support from the United Arab Emirates, Egypt and Russia. The GNA is backed by Turkey.

Reporting from Tripoli, Al Jazeera’s Mahmoud Abdelwahed said that Haftar’s forces have intensified their attacks on the outskirts of the capital since the defeats in western Libya. He said they continued to shell residential areas in the southern Tripoli on Monday.

“Since early morning, we have been hearing sounds of heavy explosions. Military sources with the GNA say Haftar’s forces have been shelling several areas in southern Tripoli indiscriminately.

“In many cases, random rockets landed in residential areas. Today, a woman was killed along with one of her sons, while three of her other children were injured in a random rocket attack launched by Haftar’s forces.”

Haftar had in a speech last week called on Libyans in territory under his control to hold demonstrations and give him a mandate to rule.

Despite a curfew imposed to slow the spread of the coronavirus, crowds thronged the streets of Benghazi and chanted slogans against the rival Tripoli administration.

The UN set up the Tripoli-based government in 2015 following the emergence of the two rival centres of power.

The agreement, frequently condemned by Haftar and his supporters, bestows international legitimacy on the GNA under the leadership of Prime Minister Fayez al-Sarraj.

It also acknowledges the House of Representatives based in Tobruk as the country’s official legislature and grants consultative powers to the previous parliament based in Tripoli.

“Haftar has once more exposed his authoritarian intentions to the world,” Mohammed Ali Abdallah, an adviser to the GNA, said in a statement.

“He no longer seeks to conceal his contempt for a political solution and democracy in Libya. His statement tonight is the final, desperate act of a defeated man.”

Anger over US decision on foreign students’ visas