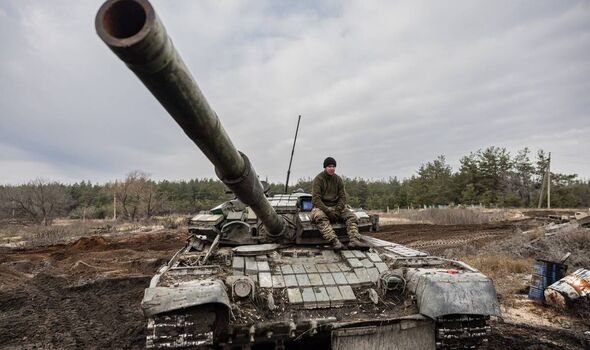 The AMX-10 RC tanks are “very mobile”, “perhaps old but high-performance”, an adviser in the French defence ministry said.

Emmanuel Macron said last night: “Until victory, until peace returns to Europe, our ­support for Ukraine will not waver.

“I confirmed it to President Zelensky: France will provide light battle tanks and continue its ­support in air defence.”

Mr Zelensky hinted more nations could soon follow, with the US considering whether to send Bradley fighting vehicles.

He said: “Had a long and detailed conversation with President of France Emmanuel Macron on the current situation.

“Thanked for the decision to transfer light tanks and Bastion APCs to Ukraine, as well as for intensifying work with partners in the same direction.

“Agreed with Emmanuel Macron on further cooperation to significantly strengthen Ukrainian air defence and other defence capabilities. Thank you friend! Your leadership brings our victory closer.” It marks the first time a major Nato nation has confirmed it is donating light tanks.

The official did not provide any further details about the amount of vehicles to be sent or when they would be delivered. Poland and the Czech Republic have already sent 230 tanks, including heavier T-72s, to Ukraine.

Meanwhile, ­public fury over Vladimir Putin’s ­invasion is growing after angry ­rallies were held in Russian cities over the deaths of around 400 ­soldiers in a rocket attack.

Devastated relatives demonstrated in cities in the south-western region of Samara where many of the conscripts were from.

Ukraine claims as many as 700 military personnel were killed or wounded at Makiivka, in the ­occupied Donetsk area.

The Kremlin said that at 00:01 on New Year’s Day, six missiles were fired from a US-made Himars rocket system, two of which were shot down.

Moscow claims only 89 died at the vocational college converted into a military base. But it also admitted the deputy commander of the ­regiment, Lt Col Bachurin, was among those killed.

Anger among hawkish critics of the Russian ­military – as well as among ­grieving families – was growing yesterday.

Pavel Gubarev, a former leading official in Russia’s proxy authority in Donetsk, condemned the ­decision to place a large number of soldiers in one building as “criminal negligence”.

Such mistakes were being made early in the war, he complained, and even if the conscripts did not realise the risk, the authorities should have done so.

He said: “If no one is punished for this, then it’ll only get worse.”