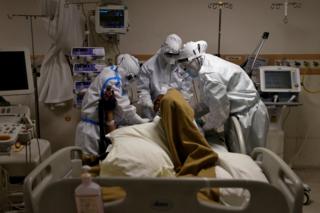 Weeks after India eased what was arguably the world’s harshest lockdown, and four months after its first recorded infection, its case number is skyrocketing.

Here’s what you need to know about the crisis.

Should the spike in cases worry India?

In absolute terms, India may not have done so badly.

At nearly 300,000 infections, it now has the world’s fourth-highest number of confirmed cases, behind Russia, Brazil and the US. But it ranks a lowly 143rd by infections per capita, according to Kaushik Basu, professor of economics at Cornell University.

The effective reproduction number of the virus – a way of rating a disease’s ability to spread – has fallen, and the doubling time of reported infections has increased.

But look closer and you see that case counts have been spiking, as have rates of hospitalisation and deaths in hotspot cities like Mumbai, Delhi and Ahmedabad. “If infections continue to rise these places will be as overwhelmed as New York,” a physician treating Covid-patients told me.

Horrific reports have emerged from these cities of patients dying after being denied admission or, in one tragic instance, found dead in a toilet. Tests are delayed or pending because labs are swamped.

India’s economy was already sputtering before the pandemic. So the country cannot afford another crushing lockdown that would shut businesses and put more people out of work. That is why India has to work hard at containing the infection.

“I am pretty worried about the numbers,” Ashish Jha, director of the Harvard Global Health Institute, said. “It’s not that infections will peak and go down on their own. You need interventions to turn the corner.”

In other words, India cannot wait for 60% of its people to get infected to achieve herd immunity and stop the virus. “That would mean millions of people dead. And that is not an acceptable outcome,” Dr Jha said.

And India’s curve has not yet turned the corner – there is no consistent and steady decline, Bhramar Mukherjee, a professor of biostatistics at the University of Michigan, said.

“I think we should worry but not let worry turn into panic,” she said.

Yes and no. India’s case fatality rate (CFR) – or the proportion of Covid positive people who have died – is around 2.8%.

But that number is contentious – as are a lot of the statistics on the contagion. Adam Kucharski, a mathematician at the London School of Hygiene and Tropical Medicine, said the problem of just dividing the total number of deaths by the total number of cases is that it doesn’t account for unreported cases or the delay from illness to death.

Experts say that looking at the aggregate CFR at this stage of the pandemic can lull governments into complacency.

“The CFR is a bit of an optical illusion,” Dr Mukherjee said. “Even if I believe the reported cases and death counts, and if you divide the number of deaths by closed cases where we actually know patient outcomes, we get a much larger percentage of fatalities”.

Even the per capita death rate limits understanding of the spread of disease – there are vast tracts of India still unscathed by the virus.

But what is worrying is that some three-quarters of the deaths are being reported from three states – Maharashtra, Gujarat and Delhi. There has been some under-reporting largely because of slip ups – Chennai city’s caseload is double the official count as two separate death registries were not reconciled. There is also confusion, as elsewhere in the world, about how to define a Covid-19 death.

And new research by economist Partha Mukhopadhyay suggests that young people in India are dying at a rate much higher than expected when you break down fatalities by age.

As of 30 April, the case fatality rate in Maharashtra for the 40 to 49 year-olds, for example, was 4%. Italy’s fatality rate for the same age group was a tenth of that.

“We need to find out why so many young people are dying here. Is it because of lifestyle diseases like diabetes and respiratory problems because of the foul air in our cities? Do we have an unhealthy young population compared to the rest of the world?,” Prof Mukhopadhyay said.

But experts say India will still end up with an aggregate low fatality rate, and the majority of people who die will still be the elderly.

“We have a large number of infections but very few sick people. In that sense, we might have dodged the bullet,” said Prof Mukhopadhyay.

What should India be worried about?

India should begin treating this as what Ed Yong, a science writer at the Atlantic magazine, calls a “patchwork pandemic”. This is when the infection spreads through a country, affecting different parts differently.

In India the virus has been spread by millions of informal workers who fled the cities after a botched lockdown abruptly left them jobless and without money. They returned to their villages on foot, and crowded trains and buses. These workers account for some 80% of recent cases in the Odisha state, for example.

“That’s why it’s important to not look at it as an India pandemic by itself”, said Dr Ambarish Satwik, a vascular surgeon at Delhi’s Gangaram Hospital. “There’s the Delhi epidemic, the Mumbai pandemic, the Ahmedabad pandemic.”

In these cities, the positivity rate – number of cases per 100 samples – is four to five times higher than the national average. As infections wax and wane and new hotspots emerge across the country, local health systems will come under stress.

“There will be a cascade of peaks across states as the virus moves through India,” Dr Mukherjee said. “India needs to really scale up health care capacity.”

In other words, India needs to nimbly move resources – doctors, healthcare workers, gear, medicines, ventilators – from the regions where infections are waning to those where they are beginning to peak.

Experts say having mobile resources – such as the army’s medical services, which has excellent doctors and healthcare professionals – on standby will help move them quickly to emerging hotspots.

Experts say India was smart enough to lock down early – 25 March – to slow the virus. “No country did it that early. It bought time for the government to make measures. It averted many deaths,” said Dr Jha.

But it happened at four hours notice, and was badly bungled as informal workers began to flee cities.

And the jury is out on whether governments used the time to ramp up testing and beef up health infrastructure. Some states – Kerala, Karnataka – appear to have done better than others – Gujarat, Maharashtra, Delhi.

If India had prepared well, experts say, it would not be witnessing a failure to control runaway infections in Mumbai, Ahmedabad and Delhi.

A shortage of doctors, healthcare workers, well-equipped beds and lack of faith in state-run hospitals has left them struggling. And, as a result, there has been a rush to admit patients in private hospitals, which were never fully prepared for this emergency.

Testing has remained an Achilles heel. India is testing some 150,000 samples a day now, up from around thousand when the lockdown began. But it still has one of the lowest per capita testing rates.

Many believe India could have ramped up testing much earlier since its first case was reported on 30 January.

“We had the resources. We are a capable country which did not plan ahead,” said Prof Mukhopadhyay. “And we also ended up frittering the early gains of the lockdown”.

The situation in the capital, Delhi, where infections, hospital admissions and deaths have all spiked, is an example of delayed, ham-handed planning.

Fearing a tsunami of cases in the coming weeks, the local government has directed private hospitals to allocate more beds to Covid-19 patients, and is also setting up beds in wedding halls, stadiums and hotels.

But experts are sceptical.

How do you ensure piped oxygen in wedding halls and stadiums at such a short notice? Where are the doctors and nurses going to come from? How will a patient on a bed in a banquet hall get critical care treatment if every ICU in the city is full?

In the end, say experts, handling a public health emergency through bureaucratic fiats and ad-hoc planning is unhelpful. And, if the government fails to communicate clearly about the continuing risks of infection, the earlier collective zeal about social distancing and maintaining hygiene will also begin to flag.

“It is a very difficult situation,” said Dr Jha.”We are still early in the pandemic and we have a good year or so to go before we turn the corner. The question is what is the plan to get India through the next 12 to 16 months?”

Venezuela's Maduro joins hands with Guaido in fight against virus

Do not swim: Point Chevalier beach hit with health warning