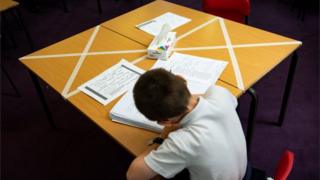 The Irish government has recommended that secondary school students and teachers should wear face coverings when a distance of two metres cannot be maintained.

The Department of Education said it had acted on advice from the Health Protection Surveillance Centre.

The measures were discussed with teachers’ unions.

Guidance for getting cleaning equipment, face coverings, sanitiser and PPE will be announced later.

All recommendations published in the public health advice by the Irish education minister in July still apply in all schools, with the exception of the recommendations on face coverings which has been updated to reflect the latest research and expertise.

In Northern Ireland, the NI Education Minister Peter Weir announced a move to bring children back five days a week from September.

Prof Ian Young said they could be worn in some settings in schools, with exceptions.

However, speaking earlier Mr Weir told the BBC’s Good Morning Ulster programme that the wearing of face coverings in schools was “not implementable”.

Coronavirus is hurting small businesses. Here’s how to help

Immigration to US to be halted due to virus – Trump