Changsha is the capital of the China’s southern Hunan province and is home to more than 10million people. Dozens of stories of the more than 200 metre building appeared to be alight. 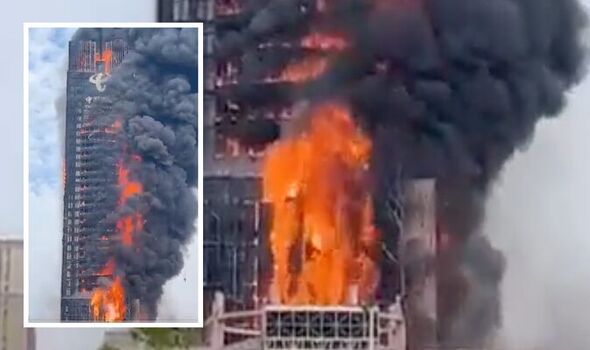 The Chinese broadcaster CCTV said: “Thick smoke is spewing from the site, and several dozen floors are burning ferociously.

“Firefighters have begun work to extinguish the flames and conduct rescues at the scene.”

The building houses an office of the state-owned telecommunications company China Telecom.

State media has reported that the fire had now been put out, but the number of causalities remains unknown.

The Singaporean broadcaster, Channel News Asia, has reported that preliminary investigations have shown that the outer wall of the 42-storey building caught fire, according to Hunan’s Fire Department.

The fire service reportedly said: “At present, the open fire has been extinguished, and no casualties have been found.”

It added that 36 fire trucks and 280 firefighters had been called to the scene.