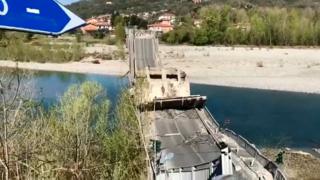 Two van drivers escaped serious injury when a bridge over a river in northern Italy collapsed on Wednesday.

The provincial road would normally have been busy but there was little traffic when the bridge fell, because of coronavirus lockdown measures.

Images from the scene show a red courier vehicle apparently still upright on the collapsed road.

The driver was hit by falling masonry and airlifted to hospital, but his injuries were described as minor.

The driver of a second van was able to clamber out of his vehicle unscathed but suffering from shock, reports said. Firefighters were checking the river in case anyone else was involved.

The condition of Italy’s road bridges has come under close scrutiny ever since 43 people died in the collapse of the giant Morandi bridge in Genoa in August 2018.

Cars fell 45m (148ft) as a 200m stretch of the structure serving the busy A10 motorway collapsed. Decaying steel rods suspending the bridge were blamed for the disaster. The bridge was operated by Autostrade per l’Italia, a subsidiary of the Atlantia company.

This latest bridge collapse took place 100km further east. The bridge links the regions of Liguria and Tuscany. Italian officials said the structure over the River Magra was some 400m in length and around 7-8m in height.

Residents in Caprigliola, the closest town to the bridge, said they heard a loud bang at around 10:20 local time (08:20 GMT) on Wednesday morning, followed by the sound of tumbling masonry.

It soon emerged that motorists had reported a crack in the bridge after a period of bad weather last November.

The bridge was repaired and then inspected by technicians before being given the all clear. It had previously been run by the local authority in Massa Carrara, the province on the Tuscany side, but then placed under the control of Anas, a firm run by state-owned railway group Ferrovie dello Stato.

“It’s a sheer stroke of luck that a collapse hasn’t turned into a tragedy – because of a lack of traffic caused by the coronavirus emergency,” said Michele de Pascale, head of the Italian provinces union UPI.

He warned that Italy’s provinces had been saying for some time that the country’s infrastructure was crying out for urgent maintenance.

A local mayor, Roberto Valettini, said he had sent three letters to the bridge operator warning about the bridge. 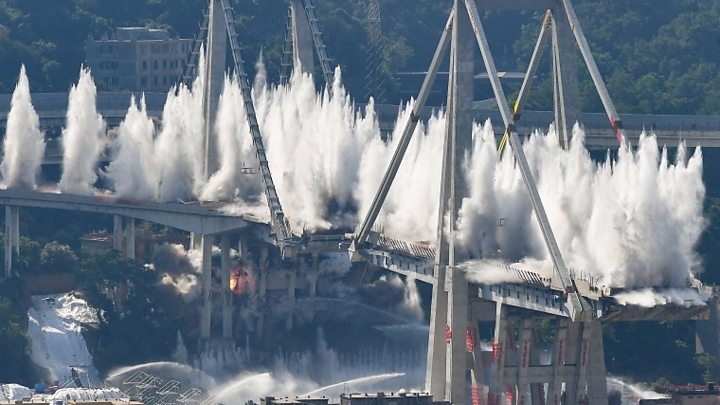 6 Books for Thinking, Drinking and Changing the World