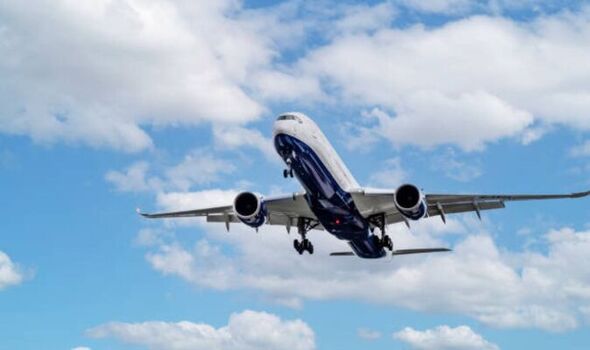 A traveller on a 29-hour flight from New Zealand to Berlin documented his irritation at a baby on board who cried continuously throughout the long-haul journey. The weary holidaymaker, Henry Beasley, captured his journey with a video he posted on TikTok.

In the initial clip posted on the site, the camera captured the baby’s screams in the background while the camera focused on the passenger’s face.

The rest of the video showed a compilation of different moments throughout the duration of the flight.

Beasley shared his reaction to the loud screams and joked at the beginning of the clip that the baby was off to a “strong start”.

He also joked that “the kid’s got some lungs”, before saying the child has “great projection”.

“A nice long one here,” Beasley wrote at one point, in reference to a persistent scream that lasted a few seconds.

Later on in the flight, when the lights were dimmed, Beasley joked: “Bring it on home now” as his eyes twitched with annoyance.

He concluded the video by writing in a text caption: “Stellar performance. Incredible stamina. 10/10.”

The video, which went viral on TikTok, sparked a debate about flying with young children.

One comment on the video, which gained 220,000 likes, said: “Honestly there should be kid-free flights and kid flights”.

Another said: “They shouldn’t allow kids on flights longer than four hours”.

“I would pay EXTRA for kid-free flights,” someone else said

Meanwhile, another joked: “At that point I’d start screaming along.”

The opinion that young children shouldn’t be taken on long flight was also shared by parents, with one person writing: “I know some people don’t have the option, but I never took my babies or toddlers on flights. Ever. It’s painful for everyone.”

But there were some users who defended parents travelling with young children, saying the experience is probably more painful for them.

One wrote: “I feel bad for the passengers, but I can’t imagine being ‘that parent’ either! The stress would be insane.”

British expats in Spain ‘panicking’ over October Brexit deadline: ‘They were let down’