In fact, experts say, the targeting of the crucial 12-mile road and rail bridge is just the first of three operations needed to make occupation of the peninsula untenable for Russia. The Kerch Strait bridge, a crucial supply route for the Russian forces who have taken control of most of southern Ukraine’s Kherson region, is deemed Putin’s pet project and was opened to great fanfare four years after Russia annexed Crimea in 2014.

Russia last night maintained that the blast that destroyed one carriageway of the £3.3bn bridge was caused by a suicide bomber in a red lorry packed with explosives, which then detonated a nearby fuel train.

However, officials could not explain how the vehicle had managed to bypass sophisticated X-ray equipment which line both entrances to the bridge, and video examination of the explosion revealed it was probably caused by an underwater kamikaze drone deployed by Ukrainian special forces.

Kyiv would not confirm it was responsible, with an SBU Ukrainian secret services spokesman saying that the role of the Kyiv intelligence agents in the bridge destruction would be revealed after victory in the war.

“We are not commenting on it. The role of the SBU or any state body of Ukraine in the blast will be commented on after our final victory,” said SBU spokesman Artem Dehtyarenko. 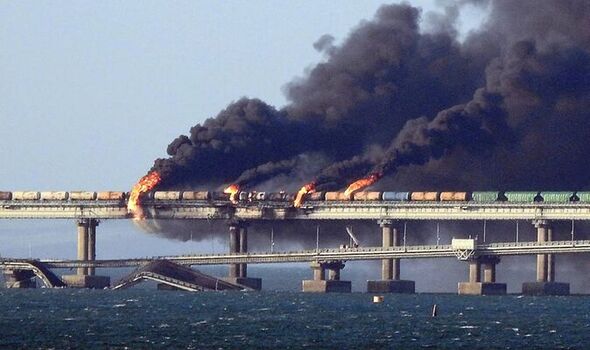 But a Ukrainian presidential adviser posted a message on Twitter saying the incident was just “the beginning” while Oleksiy Danilov, head of Ukraine’s National Security and Defence Council, posted a video of the burning bridge on social media alongside a video of Marilyn Monroe singing “Happy birthday, Mr President”. Putin turned 70 on Friday.

Estonian Foreign Minister Urmas Reinsalu said: “Estonia certainly welcomes this and congratulates the Ukrainian special forces units who were probably behind the operation.”

While the bridge can be rebuilt, the fact that it was attacked with such impunity will cause disquiet in Moscow. 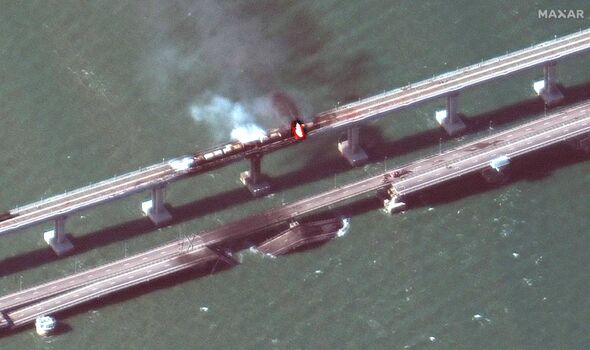 “It’s happened once, and Russia will know it can happen again” said Justin Crump, CEO of Sibylline strategic risk group.

It is just one of three strands by which Ukraine hopes to make the occupation of Crimea untenable for its Russian occupiers.

“Kyiv knows that even the most hawkish of Western governments won’t at this time support a full invasion of Crimea – the red line has been made clear by Moscow,” he said.

“So their aim is to make it uninhabitable.”

He says Ukrainian forces are now in a better position than ever before to achieve this by also targeting the peninsula’s water supplies and the so-called “gateway to Crimea” land bridge of Melitopol, which his the main transit hub linking it with Moscow.

One of the reasons for the February 24 invasion, experts say, was to restore water supplies to Crimea which had been turned off by Ukraine.

“Crimea was virtually unfarmable at the start of this conflict. It is still suffering from shortages now, though Russia denies this,” said Crump.

“But the North Crimean Canal is now vulnerable to short range Ukrainian artillery, as we should expect action there soon.”

Meritpol has already been targeted by Ukrainian artillery and this may be the focus of Ukraine’s next action, he said.

“If Russia loses land links and control of the water supply once more, occupation becomes untenable.”

Yuri Podolyaka, a popular pro-Russian blogger, said: “It looks like this is the prelude to the main strike of the Ukrainians in the south.

“If over the next few days Ukraine does not plunge into darkness and strikes are not carried out on the bridges across the Dnieper, I personally will consider it a sign of an epic failure.”

But Moscow’s suspected sabotage of a German train network yesterday shows it is willing to use any methods at its disposal to dissuade the West from continuing to support Ukraine.

According to German security sources, cables for Deutsche Bahn’s communication network had been cut in two places.

The three-hour disruptions affected rail services through the states of Lower Saxony and Schlewsig-Holstein as well as the city states of Bremen and Hamburg, with a knock-on effect to international rail journeys to Denmark and the Netherlands.

“This is exactly the asymmetric response by Russia that Nato is concerned about,” said Crump.

“Despite not providing heavy armour, Germany is still the fourth biggest donor of military aid to Ukraine. Putin is a German specialist, and he wants to stir up anti-war sentiments and economic pain to increase the cost of Western support of Ukraine, which he cannot do through military means.

“The exodus of a million Russians in recent days has only increased the likelihood of infiltration.”

COVID-19: Indian family rescued after confining themselves to tent for 15 months over coronavirus fears