Home » World News » Coronavirus: Why are they isolating in Antarctica? 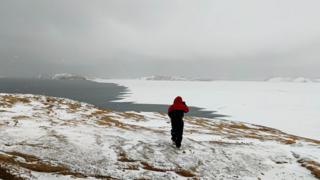 It’s cut off from the rest of the world for months at a time – and there’s not been a single case of coronavirus. So why are the research teams at Antarctica following isolation rules to combat the virus when it’s probably not even on the continent?

“A case of Covid-19 here could be disastrous. So we are taking lockdown measures, too. It feels like we are isolated within the isolation. Prevention is much better than the cure,”

That’s Pradeep Tomar – a medical doctor on a research mission to India’s Bharati base, in Antarctica.

He is five months into a year-long deployment to the station.

And if Covid-19 reached an Antarctic research base, it could be devastating. There’s nowhere else to go, medical facilities are limited – and the likelihood of spreading it to others would be high.

And so despite being on the only continent without any cases of coronavirus, the 23-strong team at the facility has been on lockdown since February.

Anyone coming to Antarctica is now quarantined for 14 days.

And if someone starts showing Covid-19 symptoms in Antarctica, they must be isolated immediately, alongside anyone they’ve had contact with.

There are 29 countries with bases in Antarctica.

And before lockdown started, there would be regular visits to Bharati from neighbouring expeditions.

The visitors’ national flag would be raised for their arrival. The different teams would celebrate important national days together. And if one of the bases needed equipment they did not have to hand, they would borrow it from their neighbours.

“This level of harmony among nations is not visible in the real world,” Dr Tomar says.

But he has not seen anyone from another facility since the beginning of March, when joint activities were paused.

When Dr Tomar arrived at Bharati, on 15 November 2019, to study the psychological effects of a polar expedition on the researchers, the world was much the same as it had always been. Now, he says, there is a constant anxiety on the site, fuelled by the lack of information about coronavirus – and constant worrying about their families back home.

Dr Tomar and his colleagues have only a vague idea of what the global pandemic and subsequent lockdowns entail.

He is relying on friends and family for updates.

And some consequences of the social distancing he is struggling to imagine at all.

“Friends have been telling me that they are surviving in a situation like ours, isolated and glued at home,” he says.

“It is beyond my imagination to realise the entire world going out with their masks on.”

With quarantine measures in place around the world, travelling to and from the base and others may become difficult.

And it could mean scientists will have to stay for many more months longer than they expected in the cold and inhospitable climate.

Situated on the Larsemann Hills, overlooking the Southern Ocean, the Bharati base, which started operations in 2012, is one of the remotest research outposts on the planet. The nearest mainland is South Africa, more than 5,000km (3,000 miles) away. The only transport is by boat – and then only in the Antarctic summer, between November and the end of March.

Those in such an inhospitable place are uniquely aware of how people cope with lockdown.

Everyone works from “home” for the duration of their stay at the facility.

There are no shops. There is no option for a casual stroll. Outside, the threat is the temperature dropping as low as -40C.

All the team at Bharati received comprehensive training before they arrived, to learn how to mentally and physically survive Antarctic winters.

The constant social isolation and lack of sunlight puts them at risk of developing depression.

And on a continent that spends many winter months with no sunlight at all, maintaining a regular sleep pattern can be difficult.

When Dr Tomar arrived, he was wary of the dangers of the Antarctic landscape.

“There is a constant threat to life when you are here,” he says. “Vast sheets of ice are packed with hidden crevices to fall into.”

But now, he is more fearful for the people at home. The world as Dr Tomar knows it could change beyond recognition during his year on the frozen continent. While he had been trained for the social isolation, compatriots at home have not.

“I truly wish I could serve my country in this time of need,” he says. “Nobody has ever witnessed something like the ongoing crisis. I hope to see the same world again when we go home.”