A global alliance on vaccines has raised £7bn – as Boris Johnson urged all nations to unite in the quest to defeat coronavirus.

The Prime Minister described the challenge of coronavirus as “the greatest shared endeavour of our lifetimes – the triumph of humanity over disease now and for the generations that follow”. 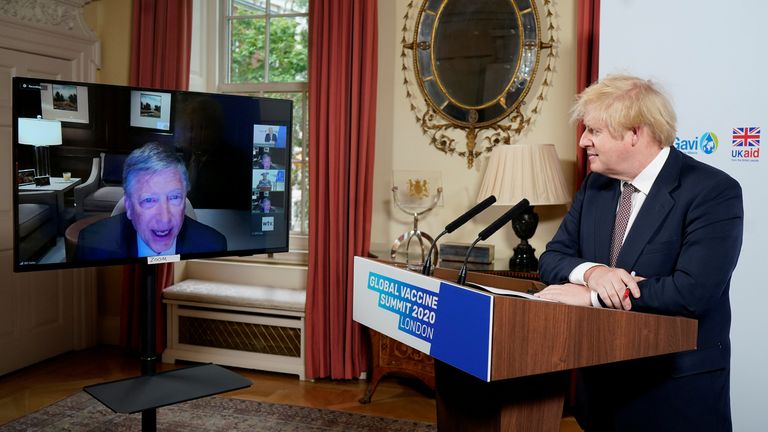 Speaking at the Global Vaccine Summit, he urged unity among all nations, describing the need for a NATO-style alliance to defend humanity from the common enemy of COVID-19.

“So today we make the choice to unite, to forge a path of global cooperation and let us also renew our collective resolve to find that vaccine that can in the end – who knows how soon it will come, let’s hope it comes as soon as possible – that in the end can defeat coronavirus,” Mr Johnson said, speaking to a virtual audience across more than 50 nations.

The money pledged will fund existing immunisation programmes to protect 300 million children in the world’s poorest countries against preventable diseases like polio, diphtheria and measles for the next five years.

It will also be used to help improve healthcare systems in those nations.

When and if COVID-19 vaccines are discovered, Gavi, the vaccine alliance, will play a key role in distributing the drug to developing countries.

A further $567m (£445m) was raised for a new financing instrument to help make sure such states are able to access and afford COVID-19 vaccines.

Bill Gates, whose foundation helped set up Gavi 20 years ago, said it was vital that the world renewed its commitment to ensuring every child had access to all life-saving vaccines.

“We are meeting at a unique time in history,” he said, speaking – like almost everyone involved – remotely over a computer camera.

“Never have more people been more aware of the importance of vaccines.”

The Global Vaccine Summit takes place every five years to raise money for programmes to help tackle preventable diseases in the poorest countries.

Britain agreed to host this year’s event long before the COVID-19 pandemic.

It should have been a three-day spectacle with world leaders, foreign ministers and health ministers travelling to the UK to make their interventions and pledges in person. The COVID-19 crisis threw those plans in the air, with organisers instead arranging a four-hour virtual summit.

There was the odd hiccup, with delegates at times speaking over each other, while bursts of music between each speech appeared designed to keep everyone who was watching remotely alert.

A total of 32 countries and 12 foundations, corporations and organisations donated money.

“Take a bow everybody. Thank you very, very much,” Mr Johnson told the summit, speaking over a rather crackly connection.

Mr Johnson likened the need to work together to fight COVID-19 with the circumstances that saw European nations, the United States and Canada combine to form the NATO military alliance.

He seemed aware it was a slightly awkward comparison, with states like Russia part of the vaccine alliance. NATO was established to defend against the former Soviet Union and is now actively pushing back against Russian activities.

Relations between the UK and Russia are particularly frosty. The UK had invited President Vladimir Putin to participate in the summit, but he declined. The Russian health minister instead sent a video message.

U.N. nuclear watchdog plans delayed board meeting because of coronavirus