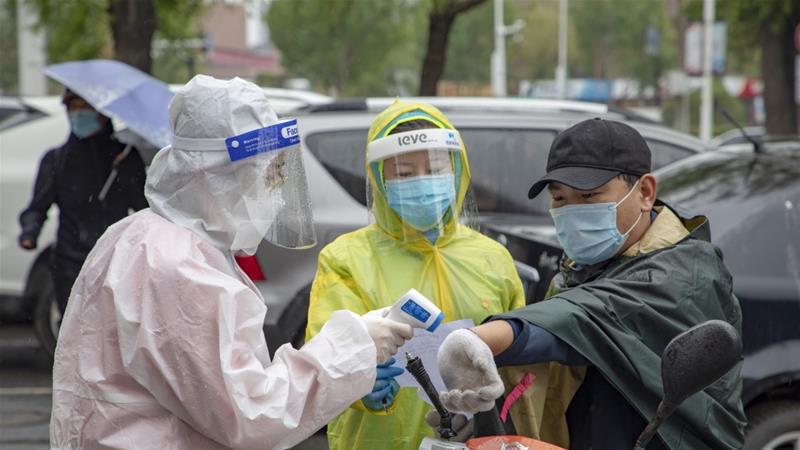 China recorded no new confirmed cases of the coronavirus at the end of Friday, marking the first time it saw no daily rise in the number of infections since authorities began reporting data in January.

The development came a day after Communist Party leaders celebrated “major achievements” in the fight against COVID-19, the respiratory illness caused by the new coronavirus.

While there were no confirmed cases in the past 24 hours, the National Health Commission reported two new suspected cases: An imported case in Shanghai and a locally transmitted one in the northeastern province of Jilin.

China has seen a sharp fall in locally transmitted cases since March as major restrictions on people’s movement helped it to take control of the epidemic in many parts of the country.

Health authorities have reported a total of 82,791 cases in the country of 1.4 billion. The official death toll stands at 4,634, well below the number of fatalities in much smaller countries.

Al Jazeera’s Katrina Yu, reporting from the Chinese capital, Beijing, described the lack of cases as a “milestone”.

“Now, this is by no means an end to the fight against the virus,” she said, noting the emergence of new clusters of infections in recent weeks. That includes cases in the northeastern border provinces of Jilin and Heilongjiang.

Earlier this month, Wuhan, the central city where the virus was first detected late last year, also reported its first cluster of infections since a lockdown on the city ended on April 8. The discovery triggered a campaign to test all of the city’s 11 million residents for COVID-19.

Yu also said there were doubts about the reliability of China’s numbers because of repeated changes to counting methodology in China.

“There’s also questions about transparency here in China … This is an authoritarian government and leaders at the local level are under immense pressure to keep those numbers down. Given the good streak here, you wouldn’t want to be the only official who reports a cluster or cases. And that has raised questions over whether we can believe what we are seeing,” she said.

The United States has led the charge in questioning how much information Beijing has shared with the international community, accusing China of a cover-up in the initial days of its outbreak. That came amid reports authorities in Wuhan reprimanded and silenced doctors who first raised the alarm about the virus late last year.

Beijing has strenuously denied accusations of a cover-up, insisting it has always shared information with the World Health Organization (WHO) and other countries in a timely manner.

Since first emerging in Wuhan the virus has spread across the world, claiming more than 335,000 lives globally.

On Friday, Li Keqiang, the Chinese premier, told the National People’s Congress that China had “made major strategic achievements in our response to COVID-19”. But the country still faced challenges, he warned.

“At present, the epidemic has not yet come to an end, while the tasks we face in promoting development are immense,” Li told delegates at Beijing’s Great Hall of the People.

Citing “great uncertainty” ahead, Li also took the rare move of refraining from announcing a 2020 growth target for China’s pandemic-battered economy, offering only a promise to address mounting joblessness and to improve living standards.