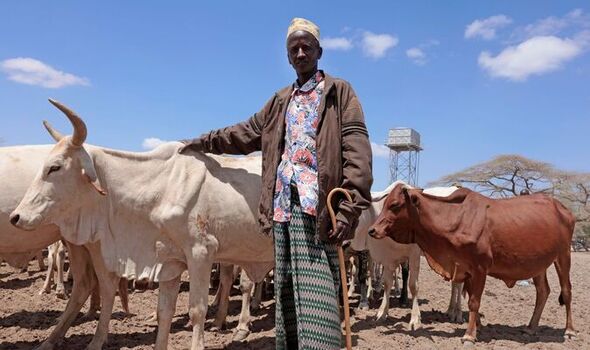 Deep in north-east Kenya, the remote town’s residents have seen their livelihoods decimated by the worst drought since 1984

They are pastoralists who depend on livestock and do not want to leave their ancestral homeland.

But as conditions worsen, the farmers are looking to diversify for the first time in generations by turning to agriculture.

Four consecutive failed rainy seasons – with a fifth anticipated – have left the plains surrounding Sericho in Isiolo County devoid of pasture and scattered with the bones of dead livestock.

The town’s 10,000 animals (cows, sheep, goats and a few camels) have dwindled to just 5,700, leaving families without their usual supply of meat and milk.

Those remaining are so weak they are of little value and farmers are struggling to put food on the table amid a cost of living crisis.

Jones Agole, 60, has just five cows left out of a herd of 40. He must provide for his wife and six children aged between seven and 16.

He said: “Some animals are so weak they cannot stand on their own so families have to come together and lift their cows up to give them a fighting chance.

“Due to this drastic change, there is a lot of hunger in my home. We basically depend on the government for food aid right now. I’m very afraid of what the future holds.”

Some farmers have moved cattle to their homesteads in a desperate effort to nurse them back to health. But this adds to pressure on their households as they must find food for the animals as well as their families.

The scarcity of water is also causing conflict with neighbouring communities.

A new borehole created with funding from the British Red Cross in January provided a much-needed lifeline for the community.

Sericho allows its neighbours to pay a small fee to access its water but people have been killed in fights that erupted over access.

Adan Salesa, 65, must provide for his wife and 12 children, plus six more the couple have adopted.

Adan said: “Before I could sell one cow and that would cater for my entire family but now the cows I have are emaciated and can’t fetch a good price, so I would have to sell 10.

“Even those would not be enough to provide the standard I provided before. I feel hopeless because my entire herd could be finished within a short time.”

Adan’s family eats just one meal a day and he said he knows of others who “do not even light their fires [to cook food] for two to three days”.

He added: “Before there was a lot of milk, milk was like water. The children were growing fast, they could walk very early.

“Things have changed. For the children there is a lot of diarrhoea. At times when they don’t get food they skip school.”

He explained: “Initially when the borehole was made it was just to be used by the humans.

“Due to the drought the animals also became dependent on that water source so the gensets [generators that pump the water] are not enough.”

The community is relying on aid from the government and agencies like the Red Cross to help them survive the crisis.

But Sericho’s residents are determined to become more resilient so they will be better prepared for future droughts.

They want to learn agricultural skills to start growing drought resistant crops and build an irrigation system that would allow them to keep water in reserve in storage tanks.

Adan explained that the community cannot simply move to another area less prone to drought because they have deep ties to their land – and moving onto someone else’s can trigger violent conflicts.

He said: “This is our ancestral land. Our grandfathers and their grandfather before that used to live here so it’s very difficult for us to move from this place to another.

“Even if we were to move, our neighbours are experiencing the same things. At least here it’s peaceful. If you move, in some places people are fighting and killing each other so it could be a worse situation.

“Before, the situation here was good. The river was flowing, we had the milk, the animals were flourishing. So we are hopeful that things will get better.”

Sericho’s chief, Mohamed Rashid, has led the town for the past six years. He said he believed that with help they could rebuild and have a brighter future.

He added: “We want to diversify our livelihoods and change from being pastoralists to start farming. Then we can have a big chance.

“The land is good, the soil is good, it can produce food for us to depend on. The young people in this community can support us with this work and we can do irrigation. But the biggest challenge is water.”

The Daily Express travelled to Sericho with a Kenya Red Cross (KRC) team, which has supported the town by digging the borehole and running cash and voucher schemes to help families buy essentials.

Jeff Otieno, disaster management programme officer at the KRC, said: “It is important to listen and understand the challenges that many communities are facing right now.

“People depend on their animals to get milk, to feed their children, to be able to sell in order to pay for school fees and other essentials.

“Now their cattle, goats and sheep are emaciated, unable to produce milk or fetch a good price at market. The knock-on effects are very serious and communities need support now.

“The Kenya Red Cross is on the ground helping communities and will continue to do so as the crisis deepens.”