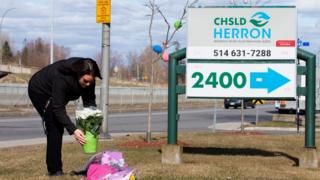 Nearly half of the known coronavirus deaths in Canada are linked to outbreaks in elderly care facilities, public health officials say.

The disclosure comes as care homes across the country have come under scrutiny.

Over the weekend, a care home in the province of Quebec, where 31 people have died, was placed under investigation.

Dr Tam said all jurisdictions are trying to deal with outbreaks in both private and public seniors’ facilities.

Where officials have data on whether a Covid-19 victim was in a care facility or seniors’ residence, she said, “close to half” were linked to those establishments.

Thirty-one of the home’s residents have died since 13 March – at least five from the virus. The cause of death in the other 26 cases has not been established.

The home in Dorval, a Montreal suburb, has 150 residents. Authorities have stepped in to care for the residents.

Many staff had left the home amid “serious problems”, he said during a weekend media briefing.

Its management company did not respond to a request from the BBC for comment but in a statement to the Canadian Broadcasting Corporation, said its appeals for help at the outbreak of the crisis went ignored by regional health officials.

The coroner’s office said it is not currently investigating deaths at similar facilities in the province but is monitoring the situation closely.

The Quebec premier was more reassuring on Monday, saying provincial health officials are carrying out checks at all the province’s long-term care homes – and in the majority of homes so far, patients were well treated and cared for.

He said it has long been a challenge to properly staff homes where workers are often paid low wages.

Some care home workers in Canada have staged protests over a lack of personal protective equipment available to them.

Care homes under the microscope

Globally, more than 1.8m people have been reported to be infected by the novel coronavirus and 116,098 have died, accordingto data complied by Johns Hopkins University.

People of all ages can be infected by the virus. But it is especially dangerous for older people and seniors’ care homes in many parts of the world have been especially hard-hit by the pandemic.

In some instances, there have been concerns residents have not been properly cared for.

In Spain, soldiers helping to fight the coronavirus pandemic found elderly patients in retirement homes abandoned and, in some cases, dead in their bed. An investigation was launched in late March.

In the US last week, the federal justice department opened an investigation into conditions at a care home for veterans in Massachusetts.

It will look into whether the home in Holyoke, about 93 miles (150km) from Boston, violated the rights of residents “by failing to provide them adequate medical care generally, and during, the coronavirus pandemic”.

While You Were Sleeping: 5 stories you might have missed, April 27