Carol Kirkwood, 60, speaking on BBC Breakfast, said there could be some “showers that turn heavy” heading into Thursday, while the weekend is set to bring in more rain. She said that temperatures should still be “warm everywhere” but it is likely to be “quite muggy” heat. Moving into the weekend, the south and east of England will have temperatures around 26 degrees while the north and west will suffer the “heaviest showers”. It comes as the latest Met Office analysis has announced that even the mild temperatures of 2021 pointed to signs of climate change.

“For most of us, it is going to be a mainly dry day because we have pressure building in from the Atlantic across our shores with light winds or gentle breezes.

“Through the course of the day, we’ll start to see more clouds develop. There will be some isolated showers across Scotland and we could see a few develop across the southeast corner, but probably not the far southeast itself.

“And the cloud should thicken up in the southwest, with temperatures reaching around 19 degrees. But, generally, we’re looking at 14 to 22 [across the country]. 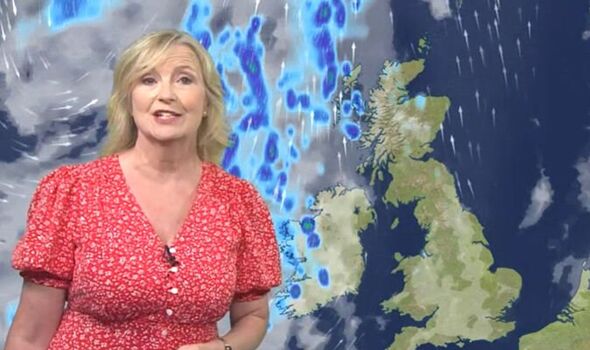 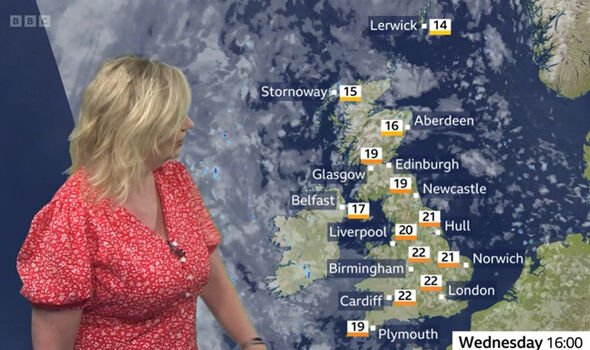 “As we head on into the evening and overnight, we continue with the buildup of clouds. There may be a few showers that turn heavy as they develop across northern England.

“There will be some clear skies but more clouds than clear skies tonight. It will not be as chilly as it was last night but it will feel quite muggy in parts of the south with overnight lows of between 13 and 15 degrees.

“And then as we head through to the end of the week, it is going to warm up everywhere, but the highest temperatures will be in the south and the east.

“It’s not going to be bone dry either. There will be areas of cloud and there will also be some sunshine at times. 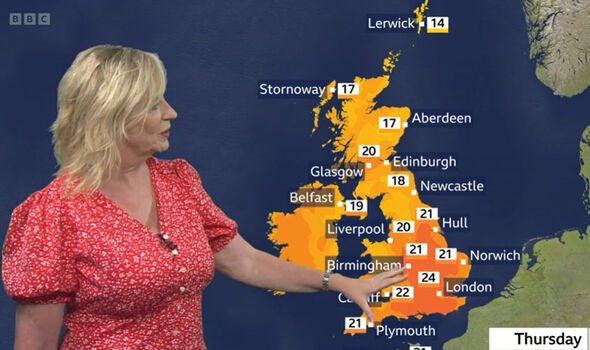 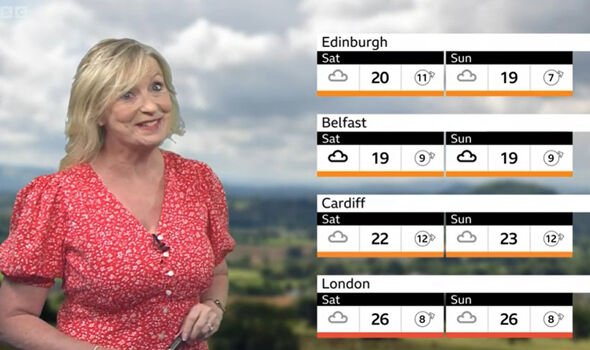 “On Thursday, temperatures will be that little bit higher, getting up to around 24 degrees in London and 20 in Glasgow

“As we move on into Friday, there will still be a lot of dry weather around, still a few showers across northern England, moving in across southern Scotland.

“For the weekend, high pressure moves away, bringing in some rain. Now, the heaviest rain will be in the north and west.

“For the south and east, it will be negligible, with the temperatures getting up to around 26 degrees.” 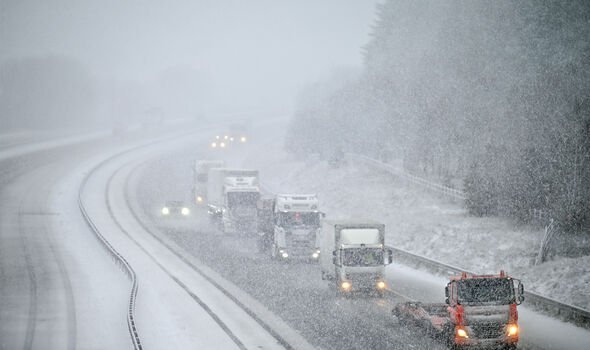 After a ferocious heatwave last week, the cooler temperatures may come as a welcome sight for Britons.

But in the latest signs of climate change, the Met Office has revealed that even last year’s “unremarkable” temperatures would have been near record-breaking only a few decades ago.

The latest annual report on the state of the UK’s climate – led by the Met Office – shows that last year’s average temperatures were just 0.1C above the average for the period 1991-2020, with 2021 the 18th warmest on record in a data series stretching back to 1884.

But most of those 18 warmest years have occurred since the turn of the century, and if 2021’s temperatures had occurred before 1990 it would have been the second warmest year on record, the Met Office said.