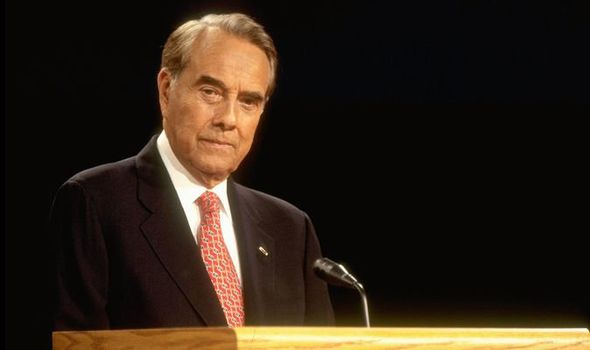 Having served in World War II and becoming seriously injured while in Italy, Mr Dole was awarded two Purple Hearts for his service, as well as the Bronze Star with “V” Device for valour for his attempt to assist a downed soldier.

The Elizabeth Dole Foundation confirmed that Mr Dole, who had been diagnosed with stage 4 lung cancer earlier this year, died in his sleep.

He announced the diagnosis on February 18 2021 in a statement.

He said: “Recently, I was diagnosed with stage four lung cancer.

“My first treatment will begin on Monday [February 22].

“While I certainly have some hurdles ahead, I also know that I join millions of Americans who face significant health challenges of their own.”

DON’T MISS:
Boris warned northern voters ‘will learn’ from broken promises [ANALYSIS]
One million pensioners in ‘life or death’ crisis [REVEAL]
William admits he head-bangs to AC/DC to get up for royal engagements [INSIGHT]

Mr Dole, who was born on July 22 1923, represented the state of Kansas in the US Senate from 1969 to 1996, becoming the Republican leader of the US Senate during his final 11 years in politics.

The politician and war hero was the Republican Presidential nominee in the 1996 election, but lost to President Bill Clinton.

Before that, he was the Vice Presidential nominee in the 1976 election.

Mr Dole resigned from the Senate during the 1996 campaign and did not seek public office again after the election.

Joe Biden: Picking up the torch of John F Kennedy