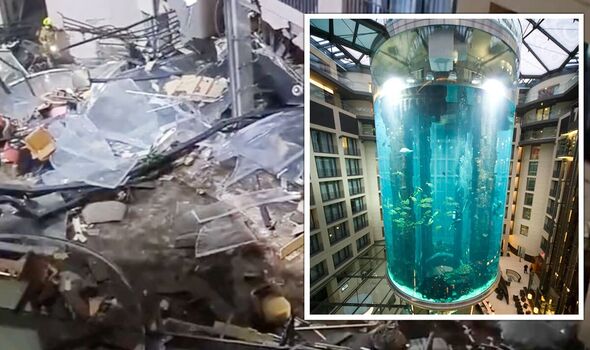 A huge aquarium has shattered in Berlin, releasing a huge wave of water into the street and leaving two people injured and 1,500 tropical fish dead, police have said.

Glass and other debris swept out of the building in the explosion of 1 million litres of water in the Sea Life tourist attraction just before 6am today.

Berlin’s fire service said two people were lightly injured and rescue dogs were being prepared to search the building for anyone who might be trapped under debris.

According to speculation, the cold weather may be to blame, as it has been suggested that freezing temperatures reaching as low as -10C overnight had caused a crack in the 25 metre tall tank, meaning it could no longer withstand the weight of the water.

Police said the cause of the incident was still being investigated, adding there was no evidence that it was the result of an attack.

The massive aquarium was located in the foyer of a Radisson Blu hotel and has a clear-walled elevator built inside to be used by visitors to the Sea Life leisure complex.

Two people were injured in the explosion by shards of glass.

Berlin police added on Twitter that it has caused “incredible maritime damage.”

Meanwhile the city’s firefighting service said that more than 100 emergency workers were at the scene.

Drivers have been urged to avoid the area, in a warning from police that water is “massively” leaking from the aquarium.

The nearby Karl-Liebknecht street has been partially closed off because there is “an extreme amount of water on the road”, Berlin’s public transport office said, also on Twitter.