“This is a catastrophe we have on our hands,” says a doctor at St George Hospital, less than a mile from the epicentre of the explosion at Beirut port.

It is one of several hospitals in the Lebanese capital which was damaged and had its electricity knocked out in the blast.

At least 100 were killed in the explosion and around 4,000 injured, according to Lebanon’s Red Cross.

Already near full due to the ongoing and unprecedented coronavirus pandemic, hospitals quickly filled beyond capacity, pleading for blood supplies and generators to keep their lights on.

Inside, the wards and corridors were overflowing with patients.

Dozens of injured were being treated on the spot on the street outside, in the rubble, on stretchers and in wheelchairs.

And all the while, people with various injuries arrived in ambulances, in cars and on foot.

An emergency doctor at Khoury Hospital said: “We have at least 300 wounded in the hospital right now, we have six operating suites that are still operating right now, and this keeps filling up by another group that needs attention.

“Every one of our crew, doctors and nurses are operating, even administration, everyone is working.

“We have a lot of damage, as you can see, all the ceilings have collapsed at the entrance, and the glass windows of patient rooms.” 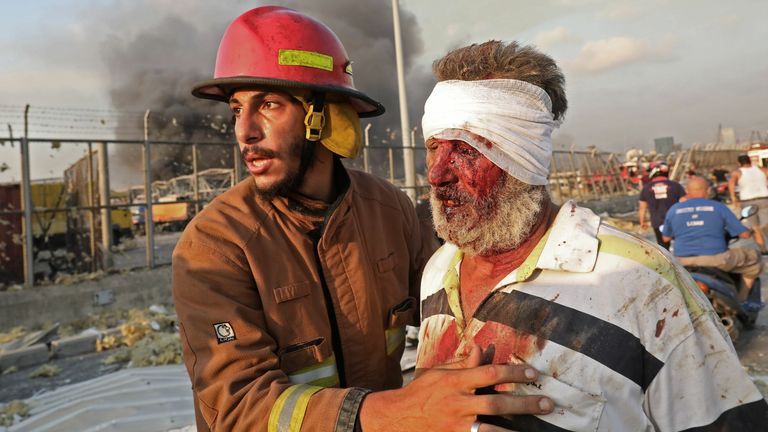 Firass Abiad, chief of Rafic Hariri University Hospital, had already tweeted on Tuesday morning that it had been nearing capacity.

After the explosion he described the scenes in the emergency department as “devastating” as new patients arrived, most with glass injuries, some transferred from other overflowing medical facilities and hospitals.

He tweeted: “More casualties will come. This will be a difficult night.

“My thoughts are with the families of people who have passed away or still missing.

“The scenes in the ED are devastating, but the staff are kind and selfless. No more words…”

Footage on social media showed the wounded – bloodied and dazed, some in tears – wandering the streets in their blood-soaked clothes, shouting for help or in search of missing loved ones.

The crunch of broken glass and stone clearly audible beneath their feet from shattered windows and smashed masonry.

Ibrahim Shamas was looking for his 29-year-old nephew, Hassan.

“We have been all over every hospital in Beirut and now we are waiting for the names to come out and nothing has come out. We do not know if he is dead or alive, we do not know.”

Those who felt the blast said they had never experienced anything like it. 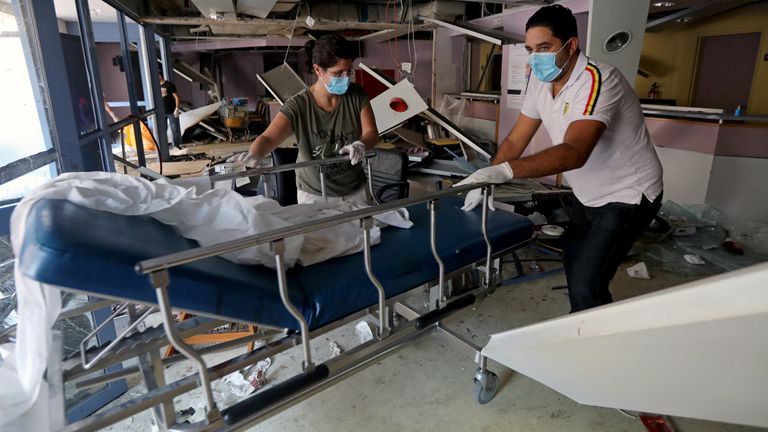 Shop owner Ahmad Ismail said he was standing at the entrance with another person when he “felt the glass shaking”.

“I said to him [that] maybe it was an earthquake and he went to ask the neighbours what’s going on.

“Then I felt something like lightning strike across Beirut, and then everything turned red and the force (of the explosion) threw me… I landed on the other end of the shop.”

He added: “I never experienced such a thing, not its size, not its sound.”

One woman said: “We were at home. We heard what sounded like fireworks. We thought it was a container in the port that was on fire and they weren’t able to put it out.

“A few seconds later we were flying through the air.”

Omar Kinno sat on the pavement, fighting back tears.

He said one of his sisters was killed when the blast rocked their apartment near the port, and another sister’s neck was broken.

His injured mother and father were taken to a hospital but he didn’t know which, and he was making calls trying to track them down.

He said: “I have no idea what happened to my parents. I am totally lost.”

“What we are witnessing is a huge catastrophe,” the head of Lebanon’s Red Cross, George Kettaneh, told broadcaster Mayadeen.

“There are victims and casualties everywhere.”