The UK faces a weekend washout, as multiple weather fronts unleash outbreaks of rain across the country. The latest BBC weather forecast showed that “it is going to be quite wet for some” as the Met Office issued rain warnings. BBC meteorologist Matt Taylor warned that the weather will worsen for many into the weekend, as stronger winds and heavier rain piles in, although this will be accompanied by warm southernly air.

He told BBC Breakfast: “Friday will be mostly cloudy. Although, there will be some sunshine to the south and to the west of the country, particularly this afternoon.

“If you were kept awake at night by heavy rain, it was this weather front here.

“It is only slowly moving away from eastern counties this morning, so heavy rain here. 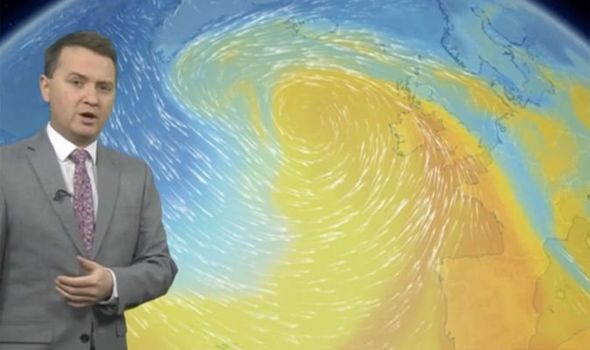 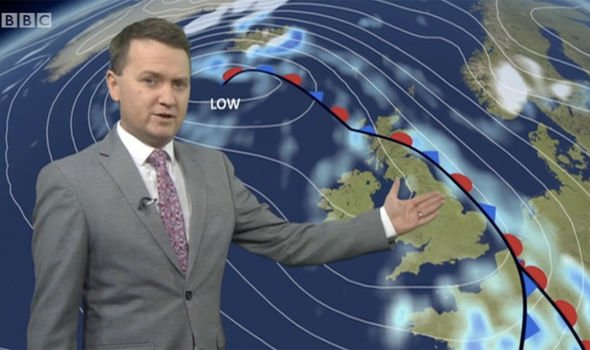 He continued: “We then see another weather front sweep into the country later today, with outbreaks of showers in the west as well. It is going to be quite wet for some.

“The showery rain continues across many parts of Scotland, England and northern and eastern Wales.

“There will be some clear skies in Northern Ireland and the south-west of England. It could even be quite a pleasant day here compared to what we see elsewhere, with some sunshine.

“We should be frost-free into Saturday. As we move from Saturday night into Sunday a more active area of low pressure starts to push its way into the UK. 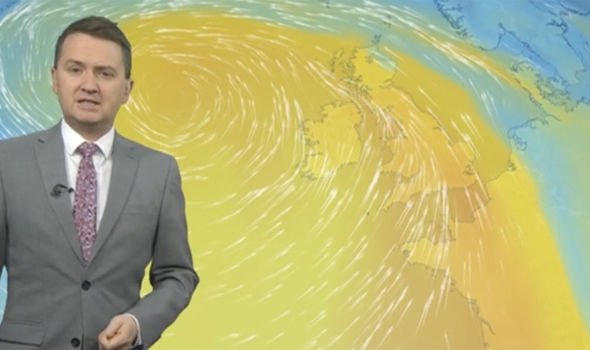 “The winds will get that bit stronger. Those winds are coming in from a more southernly direction, which means we will see some milder air gradually working its way into our shores.

“This weekend will not be as cold as it has been recently. Although we will experience heavy, persistent rain pushing its way northwards.

“It will also be a windy one. Temperatures above where we should be at this time of year. Up to 14C in the south and west of the UK, in the sunnier areas.” 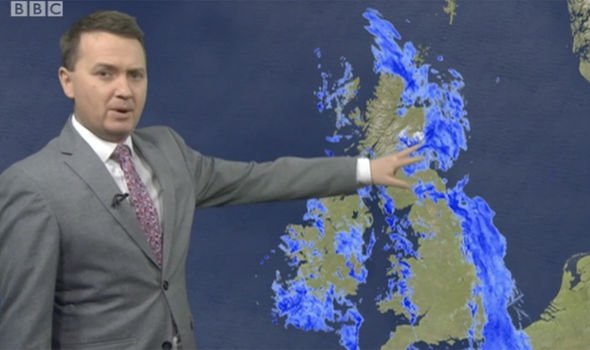 A yellow Met Office weather warning is in place from 3am Friday until noon Saturday for north east Scotland.

The rain may lead to flooding and major disruption to transport, with bus and train services probably affected.

Up to 100mm of rain could fall across higher ground in the affected areas.

For the rest of the UK, cloud and rain is expected on Saturday before downpours and stronger winds batter the rest of Britain on Sunday.

The downpours follow a period of “severe cold weather” which saw temperatures plummet to sub-zero in some places of the UK earlier this week.