BBC Weather forecaster Matt Taylor warned temperatures could reach up to 28C for some in the south-eastern corner on Wednesday. Temperatures will begin to rise today (Monday) and will gradually surge for the rest of the week. Sunny spells, however, will not last beyond Thursday as an area of low pressure is expected to reach the UK bringing thunderstorms and windy weather conditions.

Mr Taylor said: “On Wednesday, an area of high pressure starts to build its way eastward.

“We start to drag in the air from the north continent, that brings clearer skies across the country.

“So the morning cloud breaks up, lots of sunshine, rain for a time in Shetland.

“But the sunshine will boost those temperatures right across the country, widely into the 20s.

“Potentially 27C or 28C for some of us in eastern England.”

He added: “I wish I could say it will last if you like the heat, but it will be still warm on Thursday with the potential for some thunderstorms in the south-east.

“But then a big question mark for just how wet and windy things get towards the end of the week.” 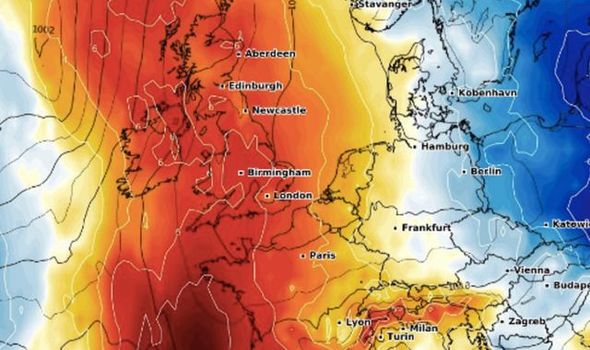 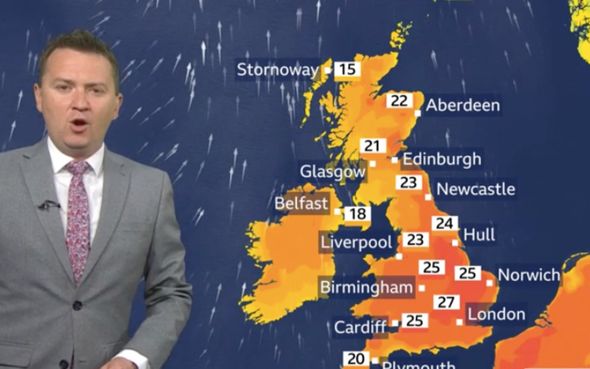 The Met Office also forecast highs of 28C could be possible later in the week, and the weather could have “all the ingredients” for thundery downpours.

Temperatures are forecast to start warm at the beginning of next week, but the Met Office are predicting temperatures will climb even higher over the next few days.

Met Office meteorologist Alex Burkill told Express.co.uk: “Monday is a damp start across northern parts of the UK, there will be outbreaks of rain across Northern Ireland, much of Scotland, and also some parts of northern England and north Wales.

“It’s also largely cloudy there, but I think the rain won’t be as heavy as what we’re going to see on Sunday evening across parts of Scotland, just outbreaks of rain, nothing especially heavy through the daytime tomorrow.

“For more central and southern parts of England and Wales, it gets sunnier the further south you go.

“Far southern counties a largely fine sunny day, but a bit cloudier as you push into the Midlands, East Anglia and Wales – there a few spots of rain are possible but on the whole it should be dry.

“Tuesday and Wednesday are pretty decent days, still a bit more cloud towards the north and north west on both days and this does bring the risk of a few spots of rain, but the further south and east you are the better the chance you’ll have largely sunny skies.”

Temperatures will rise for Tuesday, but at the moment it looks likely Wednesday will prove even hotter. 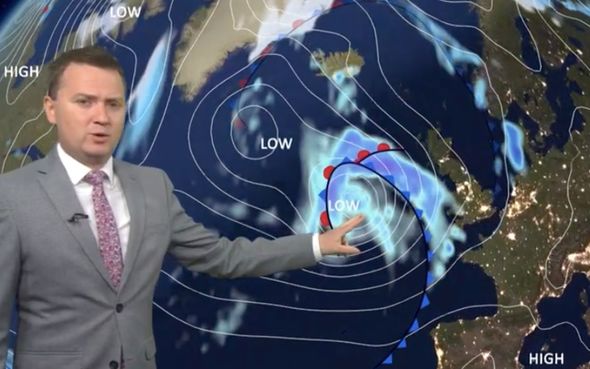 Mr Burkill said: “Tuesday we’re looking at highs of 25C, we may possibly get 26C.

“Wednesday is looking like the warmest day this week at the moment, we could get highs of 26 to 27C, maybe even a little bit higher – high 20s isn’t out of the question for Wednesday.

“The warmest parts are likely to be towards more eastern parts of the UK like the London area, East Anglia but also further north up into Lincolnshire and Yorkshire, that’s where we’re most likely to get above 26/27C.”

On Thursday there are “all the ingredients” for thunderstorms to potentially develop.

Mr Burkill added: “Heat lasts until Thursday, it depends what happens but Thursday could actually be a little bit hotter, but that does bring the risk of some thunderstorms developing with the warm air, which we often see at this time of year.

“Thursday brings the risk of some heavy thundery downpours, but away from these and any sunny spells it could again be hot with temperatures in the high twenties, it’s hard to put a figure on it at the moment but 27/28C seems quite likely, but things could change quite drastically.

“Then its a more unsettled end to the week with rain spreading from the west for Friday.”