BBC Weather: Parts of the UK set to be hit by heavy rain

BBC Weather has warned rain will continue to plague the UK on Christmas week as an area of unsettled weather moves in from the Atlantic. The Met Office said the remnants of an extratropical cyclone will smash into the UK, triggering additional showers and heavy rain. BBC Weather forecaster Matt Taylor noted the change will come after a brief respite from the water on Sunday, when rainfall will be more intermittent.

Mr Taylor said: “Breese strongest in the west and it’s the west where the showers will be more frequent through the day and the heaviest.

“Also along the southern coast of counties of England. Some of you across the east of Scotland and eastern England will spend the day largely dry if not completely dry and avoid the showers altogether.

“It will be windy tho and the winds will be strongest with the gusts across western Scotland hitting maybe around 40mph, 50mph.

“After a slightly fresher start, a cooler day compared with yesterday, only a degree or so. And temperatures still a little bit above where they should be this time of year.

JUST IN: Winter storm warning: Two feet of snow forecast in US as nation braces for nor’easter 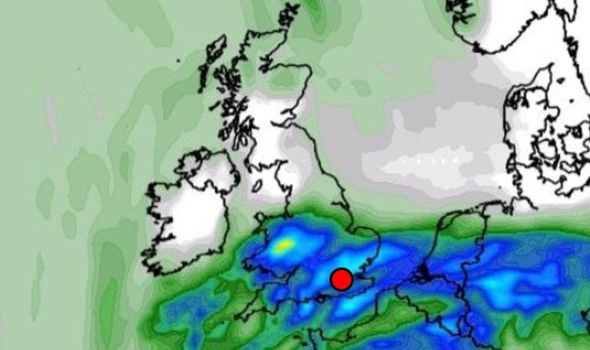 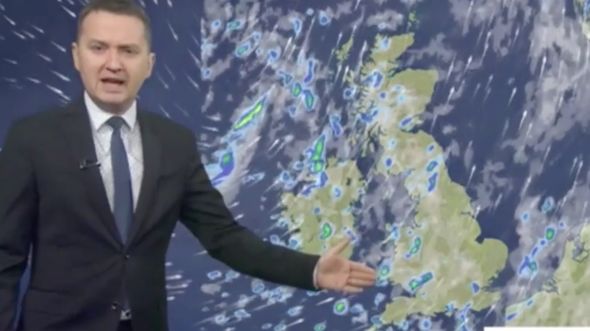 The BBC Weather forecaster continued: “As we go into the evening and overnight, some showers to begin with across England and Wales will fade only to be replaced by more persistent rain, working its way from the south.

“That’ll be falling on already-saturated ground, keep an eye on the latest flood warning if you need to.

“The northern half of the country, clearer skies, lowest of the temperatures tonight, dropping down to 2C-3C in some rural areas as well.”

Mr Taylor said the persistent rain expected this week will be the result of an area of low pressure moving in from the Atlantic causing a significant temperature split between the north and the south of the UK. 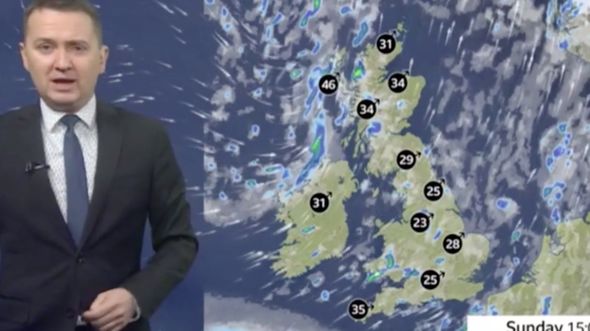 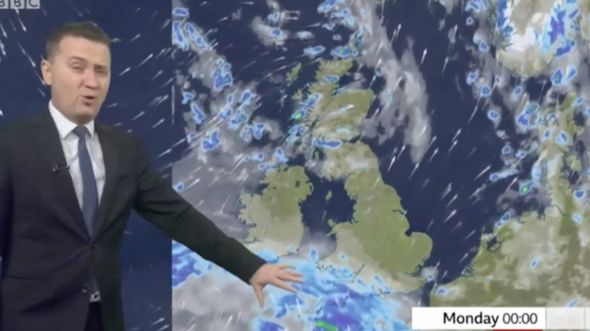 He added: “A developing area of low pressure pushing across England and Wales mainly, strongest winds to the south and southeast. Lighter winds in the north, and it’s here where the colder air can be found.

“You can see the split in conditions, warmer air in the south and cold air in the north. A mix of showers and sunshine to start within Scotland, building cloud from the south through the day, some patchy rain across south and eastern areas.

“Any rain in Northern Ireland will clear to something brighter later, rain across northern England, eastern England first thing.

“It will ease away, patchy light rain with drizzle, and a bit of a split in temperatures tomorrow, 13C-14C in the south, 6C-7C in the north.” 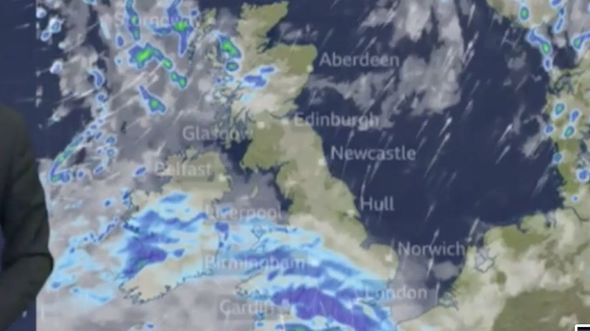 Mr Taylor said: “By Wednesday, it’s going to be a wet day across southern areas once again, and certainly, England and Wales.

“But as we get to Christmas Eve, the rain gradually clears away from the south, sunshine develops more widely.”

Marco Petagna, a meteorologist for the Met Office said: “Remnants of the USA’s nor’easter storm is heading our way.

“Then it trends colder in the run-up to the big day – and the chill may linger over the festive period.”

Another Met Office forecaster added: “Cold conditions will arrive and be the dominant pattern for the rest of the year.

“The North and East of the UK have the greatest chance of showers, falling as snow in places and especially on higher ground. Frost will increase.”