At the start of wildfire season, California’s insurance regulator has backed sweeping changes to discourage home building in fire-prone areas, including looking at cutting off new construction in those regions from what is often their only source of insurance — the state’s high-risk pool.

The proposals, many of which would require approval by the State Legislature, could remake the real estate market in parts of California and are the latest sign of how climate change is beginning to wreak havoc with parts of the American economy.

“These ideas are going to be challenging,” Mr. Lara said at the beginning of a meeting of the Climate Insurance Working Group, which he established and which recommended the changes. “We are really going into uncharted territory.”

The building industry quickly pushed back against the recommendations. Dan Dunmoyer, president of the California Building Industry Association, said it wasn’t necessary to limit development because building standards are already strong enough to protect homes in high-risk areas.

“If you build to the minimum code requirements, you are building a fire-safe home,” Mr. Dunmoyer said. He added that if the state wanted to keep insurance available in those areas, it should allow insurers to raise their rates.

The new proposals mark the latest chapter in California’s struggle to cope with years of record-breaking wildfires starting in 2017. Those fires led to insurance claims from homeowners that were unmatched in number and size, which in turn caused huge losses for insurers, wiping out decades’ worth of profits.

In response, insurers have begun pulling out of fire-prone areas, threatening people’s ability to buy and sell homes, which depends on access to affordable insurance. That’s because banks generally require insurance as a condition of issuing a mortgage.

The state has taken a series of increasingly aggressive steps, including temporarily banning companies from dropping some customers after wildfires. But those steps were meant to be a stopgap as state officials searched for more lasting changes that would allow the insurance industry to keep doing business in high-hazard areas.

California’s experience could become a model for the rest of the United States, which has staggered through a series of devastating wildfires, hurricanes, floods and other disasters. 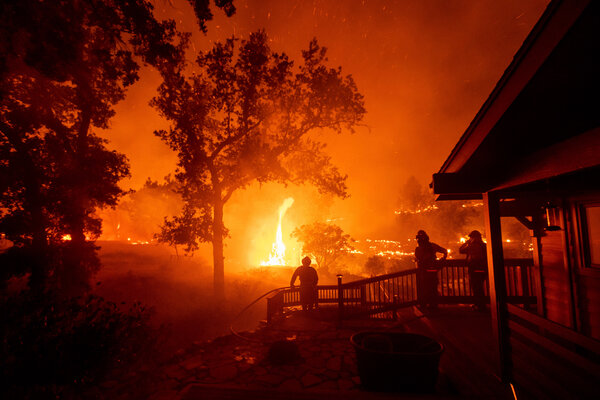 In addition to the human toll, those disasters have put growing pressure on the financial sector, prompting large investors to warn of a “systemic threat” to the economy. President Biden last month told federal officials to prepare for financial shocks from climate change, including disruption in the insurance market.

The proposals endorsed by Mr. Lara offer a window into the scale of changes that may be necessary to prepare for those shocks.

The recommendations include changes to the insurance industry itself, such as making it easier for insurance companies to charge higher premiums based on the losses they expect to suffer from future disasters. Currently, they can only seek higher rate requests based on past losses.

But other proposed changes reflect the growing consensus among experts that accelerating climate risk is fast becoming uninsurable — and if governments want insurance to remain affordable, it will mean finding new ways to limit people’s exposure to that risk.

In California, like most other states, local officials have significant control over where homes are built. Those officials face powerful incentives to permit the construction in fire-prone areas: New houses mean more jobs and more residences, which translate into more tax revenue.

But expanding development into fire-prone areas also carries costs, such as the need to fight wildfires, evacuate people and repair damage afterward. A significant share of those costs are borne by the state and by insurance companies, who have little influence over the decision to build there in the first place.

The recommendations call on the state to put pressure on local officials to be more selective about where new homes can be built, even if that means cutting off state support. The state should determine the areas where climate risk “is too high for state dollars to be used to support new development and infrastructure,” according to the working group.

If local officials still want to build in high-risk areas, the recommendations call for an expansion of tough building standards. California already has one of the most exacting building codes for areas exposed to wildfires, but those codes only apply to the most dangerous areas.

And if local officials insist on building in places exposed to wildfires, the recommendations call for preventing those homes from getting insurance through the state’s FAIR Plan. That state-mandated plan is California’s insurer of last resort; it offers coverage to homeowners who have been denied traditional coverage. Without access to the FAIR Plan, homeowners would run the risk of having no insurance at all.

“When insurance availability is guaranteed to all new developments, then homes may be built in areas where no private insurer may be willing to write insurance,” the report says.

The Personal Insurance Federation of California, which represents the industry and was represented on the working group, said it supported the recommendations.

State Senator Bill Dodd, a Democrat whose district includes Napa, Sonoma and other areas hit hard by recent wildfires, said he was open to many of the recommendations, including stopping access to the FAIR Plan for new homes in high-risk areas, halting infrastructure spending and expanding building codes. “We’ve got to rethink how we are developing” in those places, he said.

He said he thought those ideas could find backing from other lawmakers in Sacramento, too. “A lot of my colleagues are having the same problems with their constituents not being able to get insurance,” Mr. Dodd said. “They’re open to listening.”

In an interview, Mr. Lara said the state was hurting homeowners by allowing construction to continue in those places.

“Owning a home that loses value because it’s uninsurable is really not affordable — it is a false promise that we’re making to future homeowners,” Mr. Lara said. “We need to have an honest conversation before we build into more of these sensitive areas: Do we truly recognize the risk? Or will these communities just exacerbate the problems that we’re already living under?”