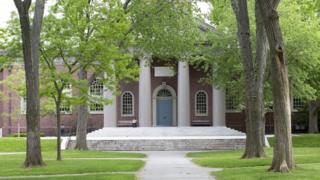 Politicians and academics have criticised a decision to withdraw US visas from foreign students whose courses move fully online.

US Immigration and Customs Enforcement (ICE) said people could face deportation unless they changed to an institution with in-person tuition.

A number of US universities are considering online teaching in the new academic year due to coronavirus.

It is not clear how many people will be affected.

The Student and Exchange Visitor Program, which is operated by ICE, had introduced a temporary exemption to allow students whose courses had moved online for the spring and summer semesters to remain in the US.

However, the exemption will not be extended into the new academic year. The decision affects students who are in the US on F-1 and M-1 visas, according to the ICE statement.

The news came on the same day that Harvard announced all course instruction would be delivered online in the new academic year, including for the limited number of students allowed to live on campus.

According to The Chronicle of Higher Education, 9% of US universities are planning to teach all their classes online in the autumn, although this could change in the coming months.

The president of Harvard University, Larry Bacow, said in a statement quoted by US media: “We are deeply concerned that the guidance issued today by US Immigration and Customs Enforcement imposes a blunt, one-size-fits-all approach to a complex problem, giving international students, particularly those in online programs, few options beyond leaving the country or transferring schools.”

He added that the decision “undermines the thoughtful approach taken on behalf of students by so many institutions, including Harvard, to plan for continuing academic programs while balancing the health and safety challenges of the global pandemic”.

“Kicking international students out of the US during a global pandemic because their colleges are moving classes online for physical distancing hurts students,” said Democratic Senator Elizabeth Warren. “It’s senseless, cruel, and xenophobic.”

Kicking international students out of the US during a global pandemic because their colleges are moving classes online for physical distancing hurts students. It’s senseless, cruel, and xenophobic. @ICEgov and @DHSgov must drop this policy immediately. https://t.co/MHYduGA1Pk

Her comments were echoed by the former US ambassador to the UN, Samantha Power, who said the decision made “no sense and [is] unworkable for most college students”.

Journalist Elizabeth Spiers, who teaches at New York University, said many of her students were reliant on visas and would be unable to follow an online programme due to the time difference between the US and their home countries and other considerations.

Many of the students in the program I teach in at NYU are here on student visas. And given their countries of origin and time zones, many of them would not be able to make an online program work from their home countries. They would have to drop out. https://t.co/vBDapHqFys

Muhammad Ehab Rasul, a graduate student at the University of South Florida who is originally from Pakistan, said the move “added to a growing list of things that induce uncertainty and anxiety among international students”.

“As international students, and as minorities, we are expected to prove why we belong here and that in itself is something that drives anxiety and uncertainty. And not knowing whether you can stay at your university only further flames that issue,” he told CBS News.