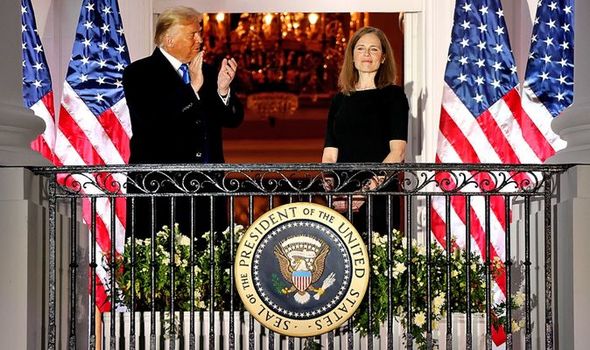 Just hours after Amy Coney Barrett was voted in by the Senate’s Republican majority on Monday, the US leader saw her sworn in at the White House. Mr Trump said: “This is a momentous day for America, for the United States constitution and for the fair and impartial rule of law. She is one of our nation’s most brilliant legal scholars and will make an outstanding justice on the highest court in our land.”

It was the first time in 151 years a justice was confirmed to America’s highest court without the support of a single member of the minority party.

The vote – 52 to 48 – highlighted the political divide felt in the US ahead of Tuesday’s election.

Her confirmation concluded a breakneck drive by Republicans to fill the vacancy created by the death of Justice Ruth Bader Ginsburg, a liberal icon, just six weeks earlier.

The appointment seals for the foreseeable future a 6-3 conservative majority, sparking fears the bench could overturn Roe v Wade, the case that allows women to have abortions.

But it came as a much-needed boost to Mr Trump’s flagging campaign which yesterday saw Barack Obama urge Americans to vote for Mr Biden.

The former president attacked his successor’s first term in office, saying: “I did hope for the sake of the country, that he might show some interest in taking the job seriously.

“He hasn’t shown any interest in doing the work or helping anybody but himself and his friends.”