Newsfeed video on the Rohingya crisis and AJ Contrast series about homelessness in LA among the 2020 winners. 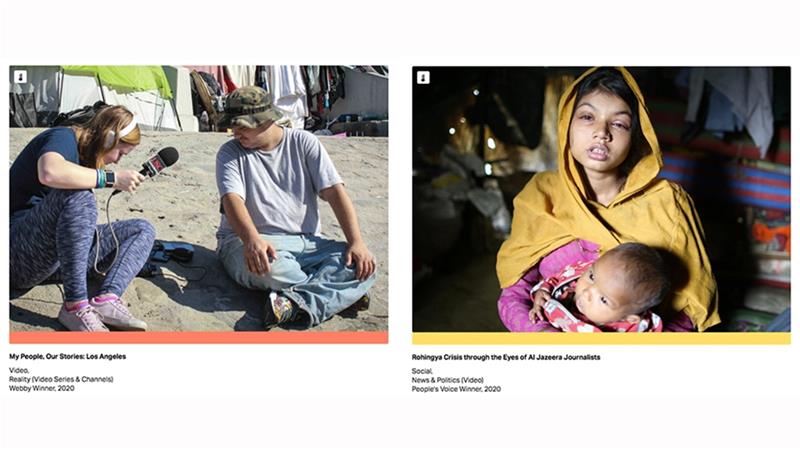 Al Jazeera Digital has won two Webby awards for its work in highlighting the plight of Rohingya refugees and homelessness in the United States.

Al Jazeera English Newsfeed emerged with a People’s Voice award in the Social, News & Politics category for its video on Rohingya crisis through the eyes of Al Jazeera’s journalists.

The People’s Voice Award-winning short film, produced in collaboration with Al Jazeera English’s TV and digital correspondents, commemorated the two-year mark of 700,000 Rohingya being driven from their homes by the Myanmar military in 2017.

“Throughout my career, I have covered war and violence,” said Al Jazeera English senior correspondent Mohammed Jamjoom in the film.

“But I have never heard of anything like that happening to human beings,” he said, recalling his interview with Rajuma Begum, a young mother whose baby was taken from her arms and thrown into a fire before she was gang-raped by Myanmar army soldiers.

“I’m proud of our teams who have worked tirelessly to bring news of oppressed communities to our global audience,” said Carlos van Meek, director of Digital Innovation and Programming.

“We especially appreciate the collaboration with our TV colleagues where the coverage of the Rohingya crisis right from the start has set a model for crisis reporting. This win is a powerful example of teams coming together to ensure ongoing coverage of an important global story.”

In the video series reality category, AJ Contrast’s My People, Our Stories: Homelessness in Los Angeles, walked away with a jury win.

AJ Contrast worked with Professor Robert Hernandez and USC JOVRNALISM students to train five people in the use of 360-degree cameras.

The participants then documented their daily lives as they navigated the challenges of working while homeless, living in their cars, constantly being on the move and maintaining love relationships.