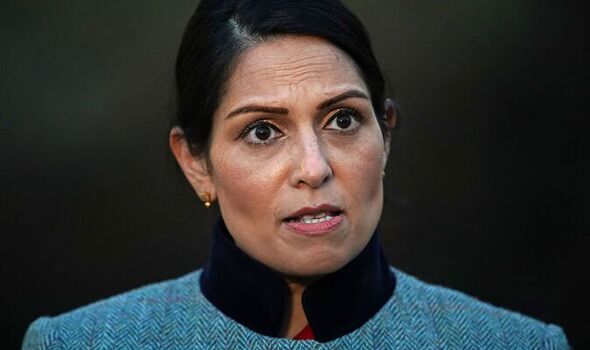 The Home Secretary said the worsening cross-Channel crisis meant it was time for Britain to use science to provide cast iron proof that refugees were telling the truth.

Her pledge comes amid rising concern little progress has been made to win the battle against illegal immigration, despite a decade-long pledge to do so.

Ms Patel said adult economic migrants posing as under-18s in order to claim asylum were “playing the system” and abusing Britain’s global reputation as a welcoming and hospitable nation.

Speaking exclusively to the Daily Express as the Bill finished the committee stage in the Lords, Ms Patel, 49, said: “For too long our asylum system has been abused by people who have no right to be in the UK trying to game the system for their own benefit.”

Finland and Norway use radiographs to examine teeth and bone development, while X-rays are used in France.

The idea of using hi-tech tools to assess ages of those entering the UK was first mooted by Tory MP David Davies. Ms Patel’s Bill is the latest attempt to fix an asylum system costing taxpayers £5million a day. She said her “firm but fair” approach will protect and support those in need while deterring illegal entry.

This, she says, will smash the lucrative business model of people smugglers.

Ms Patel said: “The Bill will give experts the power to assess age using scientific methods.”

The Liberation Movement opposes the Bill. Activist Deborah Hobson said it was driven by those who see asylum seekers as a threat.

But former Brexit Party leader Nigel Farage said: “At last something is being done to stop adults claiming they are minors.” Some 28,431 migrants crossed the Channel last year – triple 2020’s total.

FOR too long our asylum system has been abused by people who have no right to be in the UK trying to game the system for their own benefit.

One of these blatant abuses is when adults pretend to be children in order to access services designed to protect the most vulnerable.

The practice of grown adults masquerading as children while they claim asylum is a sickening abuse, one on which the British public rightly expect the Government to take action.

By pretending to be under 18, these adults can attend state schools and access public services through lies and deceit, putting vulnerable children at great risk.

More resources and support have been given to local councils to help them prevent adults being treated as children; but there is more we must do now to end this dangerous exploitation of the system.

The Nationality and Borders Bill – part of our New Plan for Immigration – will give experts the power to assess age using scientific methods informed by a Home Office Scientific Advisory Committee; and if someone refuses to undergo an age assessment without good reason, then this must be taken into account when deciding to believe what they say about their age.

This is important because our current method of resolving age disputes is time-consuming.

And where someone is found to be an adult, it can cost councils thousands of pounds of taxpayers’ money in legal costs to defend.

Scientific methods are already used in more than 25 European countries, often as a matter of routine.

The plan will fix our broken asylum system and tackle the abuses, so this country has the fair but firm immigration system it deserves.

Staff at failing DVLA get £2.2m in bonuses

No more furlough! Record levels of job vacancies show the country is back on track