Republicans are focusing on pocketbook issues, and Democrats are emphasizing abortion rights, as Labor Day marks the start of the midterm elections’ final stretch. 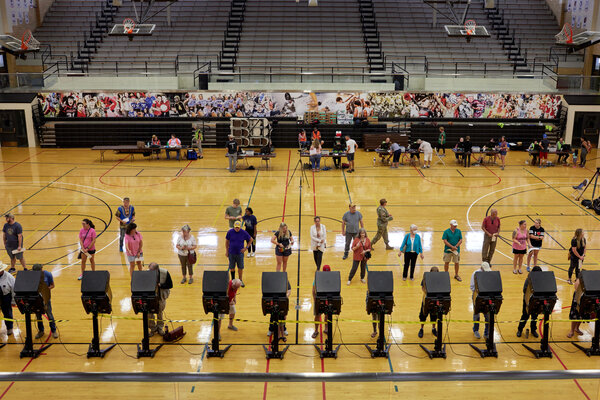 By Lisa Lerer and Jennifer Medina

For two decades, midterm elections have served as a vehicle for voter discontent, a chance for Americans to punish the president, shake up a statehouse and express their anger with the party in power by costing them congressional seats and governor’s mansions.

This year, though, the dissatisfaction has intensified and become something like a national anxiety disorder.

With the pandemic receding, voters have been whipsawed by economic uncertainty, public safety concerns, lingering public health threats and shortages of everything from used cars to baby formula to teachers. The political upheaval around abortion rights, devastating gun violence, the F.B.I. investigation into former President Donald J. Trump and his continued lies about the 2020 election have heightened the sense that the country’s political system is deeply dysfunctional, if not headed toward collapse.

Now, as the midterm contests enter the final campaign stretch after Labor Day, the election is shaping up to be a referendum on which party is more to blame for a country that has decidedly not returned to normal. From swing districts in sunny Southern California to the perennial political battlefields of Michigan’s Oakland County, candidates, voters and strategists from both parties describe an electorate that has lost its bearings.

“Folks look around, and they feel like it’s been a really tough couple of years,” said Representative Josh Harder, a Democrat running for re-election in the agricultural Central Valley of California, where wealthy Bay Area tech workers have driven up housing prices. “Our message can’t be, ‘Look at what we’ve done. Everything is fine and dandy.’ We have to listen and then we have to respond.”

The fundamentals — high inflation, an uncertain economy, the president’s dismal approval ratings — still favor Republicans, as do the recent shifts to the electoral map because of redistricting. But outrage over abortion rights, the passage in Congress of a series of economic and climate change bills and the continued dominance of Mr. Trump within his party have made some Democrats hopeful that they can triage some of their deepest losses.

Expectations of a so-called red wave have moderated since the spring, with President Biden’s approval rating rising modestly and gas prices falling from record highs. In recent weeks, Democrats have gained a slight advantage in polling, though their lead remains in the margin of error in most surveys.

They hope to make the election not a referendum on the unpopular president but rather a choice between “normal” and “extremism that threatens the very foundations of our Republic,” as Mr. Biden put it in a prime-time address on Thursday. Strong showings in special elections this summer have encouraged Democrats efforts to lean further into championing abortion rights and their message that the Republican Party is too extreme.

Democratic victories in those special elections, typically sleepier summertime affairs, were driven by more engaged college-educated voters who were more energized by issues like abortion and gun control. But the midterm electorate may be more likely to mirror the governor’s races in Virginia and New Jersey last year. In those races, Republicans made gains after attracting a broader electorate that was more focused on economic issues and education — topics that remain the top issue for the largest number of voters.

Representative Young Kim, a Republican who represents parts of Orange County in Southern California, said voters in her tightly contested district were regularly voicing concerns over what she sees as the failings of the Biden administration: the cost of living, border security and crime.

“They talk about the highest inflation that they’ve ever seen and the rise of prices everywhere, from grocery stores to clothing stores to coffee shops,” Ms. Kim said. Asked about abortion rights and threats to democracy, Ms. Kim was dismissive: “I hear about those things very infrequently.”

Strategists on both sides caution that the election environment remains deeply unpredictable.

Energy prices could spike again this fall, and the prospect of a continuing increase in interest rates has many investors and economists predicting a recession. The F.B.I. investigation into Mr. Trump is expected to continue, which could mobilize partisans in either party. He has privately floated declaring his 2024 presidential candidacy in the fall, a prospect that worries some Republican leaders who believe such an early announcement would be an unnecessary — and politically divisive — distraction. And in the states, legislative battles over abortion rights will keep the issue front and center.

Some voters say the instability has prompted them to grapple with decisions they never thought to make. How secure is your child’s school from shootings? Do you send your college student to school with abortion medication? Does the cost of beef make you skip over the butcher’s section in the grocery store?

Dwight Pearson, a 60-year-old chef in Cincinnati, said he felt waves of shock this year, beginning with Russia’s invasion of Ukraine.

Staff at failing DVLA get £2.2m in bonuses