Home » Politics » With Court Prize in Sight, Republicans Unite Behind Trump Once Again

WASHINGTON — Senator Mitt Romney of Utah said on Tuesday that he would back President Trump’s push to fill the Supreme Court seat vacated by the death of Justice Ruth Bader Ginsburg, cementing all but monolithic Republican support six weeks before the presidential election for confirming a new justice who would tilt the court decisively to the right.

Mr. Romney’s decision capped off an extraordinarily swift and enthusiastic rally by Republicans around Mr. Trump’s position that underscored his iron grip on the party four years into his presidency. But it also reflected the political bargain that has been driving Republicans for much of the past four years.

Republican senators have loyally stood behind the president at every turn, even as he trampled party principles, shattered institutional norms and made crass statements — all in the service of empowering their own party to install a generation of conservative judges in the nation’s federal courts.

Now, with the biggest prize of all in reach — a third seat further tipping the Supreme Court to the right — they are rushing to collect on their bet, even if it ends up being the last thing they do before they lose their Senate majority, Mr. Trump loses the presidency, or both.

Neither party is sure how the court fight will affect the election.

“At this point, I would say that our conference is committed to moving forward,” said Senator John Thune of South Dakota, the No. 2 Senate Republican.

No one more clearly embodied the trade-off than Mr. Romney, the party’s 2012 presidential nominee, who may best represent the conventional Republican Party that Mr. Trump has delighted in tearing down.

Mr. Romney has made no secret of his distaste for Mr. Trump; he was the only Republican to vote to convict and remove the president from office during his impeachment trial in February. But with deeply held religious beliefs and conservative principles, Mr. Romney was not about to pass up an opportunity to cement a court that could limit abortion rights, further empower business interests and potentially strike down far-reaching federal programs that future Democratic administrations may try to enact.

“My liberal friends have over many decades gotten very used to the idea of having a liberal court, but that’s not written in the stars,” Mr. Romney said, despite the fact that the high court has had a majority of Republican nominees for decades. “I know a lot of people are saying, ‘Gosh, we don’t want that change.’ I understand the energy associated with that perspective. But it’s also appropriate for a nation that is, if you will, center-right to have a court which reflects center-right points of view.”

With Mr. Trump planning to wait until Saturday to announce his nominee at the White House, Senate leaders remained publicly undecided about whether to try to rush through a confirmation vote before the election on Nov. 3. But Republicans on the Judiciary Committee have begun privately making preparations for a confirmation process that could play out in as little as a month, a drastically abbreviated timeline compared with other recent Supreme Court nominees.

Democrats, conceding that they did not have the power to stop it, unleashed a torrent of anger and parliamentary tactics intended to disrupt Senate business. They accused Republicans of gross hypocrisy, pointing to their refusal in early 2016 to consider Merrick B. Garland, President Barack Obama’s nominee to fill a Supreme Court vacancy, because it was an election year.

“We can’t have business as usual when Republicans are destroying the institution, as they have done,” said Senator Chuck Schumer, Democrat of New York and the minority leader.

But Republicans were unapologetic. In the four years since Mr. Trump took office, they have rarely parted ways with him, terrified of drawing a presidential rebuke on Twitter, unwilling to alienate his enthusiastic supporters who comprise a crucial section of the party’s base and worried about a backlash that could cost them their seats.

They were not about to start when it came to a lifetime appointment to the Supreme Court, a galvanizing issue for Republicans, especially socially conservative and religious Christian voters turned off by Mr. Trump’s persona.

Rick Santorum, a former senator from Pennsylvania and a prominent social conservative, recalled on Tuesday that he had initially demurred when Mr. Trump asked for his endorsement in 2016 because of what he called “character flaws.” But he changed course after Mr. Trump released a list of conservative possible Supreme Court picks.

“That’s how a lot of folks like me felt about the Trump presidency,” Mr. Santorum said.

“I can say, without question, that Donald Trump has probably been the most pro-life we’ve ever had,” Mr. Santorum said. “Which is remarkable.”

In this case, Republicans were also contending with the unequivocal stances they took four years ago against confirming Mr. Garland, when they argued that voters should have a say in who filled the vacancy created with nearly a year left in his presidency. A handful of senators, including Lindsey Graham, the chairman of the Judiciary Committee, had made even more recent statements saying they would not fill a vacancy this election year either.

There is also considerable political risk for Republicans. Early public polling suggests that voters believe the winner of the election ought to be the one to fill the seat, and they could punish Mr. Trump and Republican senators on the ballot for their power play, potentially costing the party the White House and the Senate majority.

By Tuesday, it appeared that Republican leaders and Mr. Trump would hold defections within their own party to just two: Senators Lisa Murkowski of Alaska and Susan Collins of Maine, who have said they would not support filling the vacancy so close to the election.

Ms. Collins, who is in one of the most difficult re-election fights in the country this fall, said her stance would not change; but Ms. Murkowski said she would now wait to see the nominee.

“I made it very clear, yes, that I did not think there should be a vote prior to the election,” Ms. Collins told reporters. “And if there is one, I would oppose the nominee.”

As Republicans prepared to move forward, mourners in Washington and across the country were preparing to honor Justice Ginsburg, a pioneering women’s rights advocate who died on Friday, in a private ceremony at the Supreme Court and a public viewing outside the court building on Wednesday. 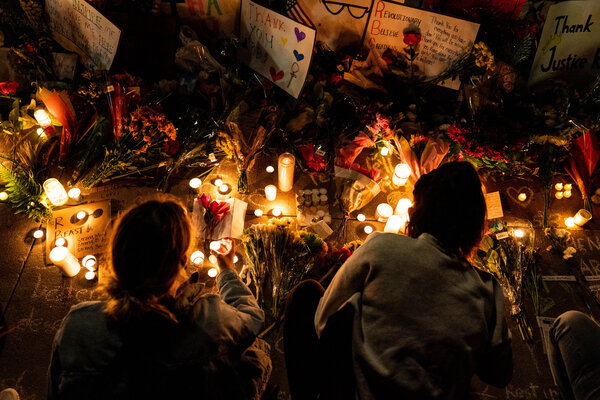 At the White House, Mr. Trump and his advisers continued to contemplate a handful of possible nominees, all women, before the announcement on Saturday. But while Mr. Trump enjoys creating a public crescendo about his choices, and is likely to meet with Judge Barbara Lagoa of the 11th Circuit, four people briefed on his thinking said the decision was close to made in favor of Judge Amy Coney Barrett of the United States Court of Appeals for the Seventh Circuit in Chicago.

Mr. Trump likes Judge Barrett, a favorite of anti-abortion conservatives, and has been receptive to advisers’ descriptions of her as a female version of Justice Antonin Scalia, who died in 2016. She was at the White House on Tuesday for a second consecutive day.

Senator Mitch McConnell of Kentucky, the majority leader who has been the architect of Republicans’ record-breaking success in filling the courts, said the party would lay out a timeline for the confirmation process as soon as Mr. Trump settled on his pick. Either way, he said, the president would end up with a “well-qualified woman” on the court.

Senate Democrats, furious over what they considered a rapidly unfolding nightmare, sought to stir up public outrage.

“I’ve been around here a few years,” said Senator Richard J. Durbin of Illinois, Mr. Schumer’s deputy. “You can slow things down, but you can’t stop them. And there comes a point when we would use whatever tools we have available. But ultimately, there will be a vote.”

Coronavirus: ‘We have the power to proceed’ with Manchester Tier 3 lockdown if talks fail, Raab says