Home » Politics » Wisconsin G.O.P. Wrestles With Just How Much to Indulge Trump

Wisconsin Republicans were already going to great lengths to challenge the 2020 election results. They ordered a monthslong government audit of votes in the state. They made a pilgrimage to Arizona to observe the G.O.P. review of votes there. They hired former police officers to investigate Wisconsin’s election and its results.

But for Donald J. Trump, it wasn’t enough.

In a blistering statement last week on the eve of the state party’s convention, the former president accused top Republican state lawmakers of “working hard to cover up election corruption” and “actively trying to prevent a Forensic Audit of the election results.”

Wisconsin Republicans were alarmed and confused. Some circulated a resolution at the convention calling for the resignation of the top Republican in the State Assembly, Speaker Robin Vos, who in turn announced the appointment of a hard-line conservative former State Supreme Court justice to oversee the investigation. The Republican State Senate president released a two-page letter that said Mr. Trump’s claims about Republicans were false — but that made sure to clarify in fawning language the state party’s allegiance to the former president.

“The power of your pen to mine is like Thor’s hammer to a Bobby pin,” the Senate president, Chris Kapenga, wrote, adding that he was wearing “Trump socks” and a “Trump-Pence mask” while boarding a commercial flight.

It was all a vivid illustration of Mr. Trump’s domineering grip on the Republican Party, and of his success in enlisting officials up and down its hierarchy in his extraordinary assault on the legitimacy of the last presidential election. Nearly eight months after Election Day, Republicans are reviewing results in at least three states — Wisconsin, Arizona and Georgia — and are trying to do so in others, including Michigan and Pennsylvania.

They are likely to have little material success, since the results have long been certified and President Biden has been in office for months. But the effort to challenge state election results has raised doubts about the routine certification of future voting outcomes. It is also likely to have a far-reaching intangible impact on the acceptance of election results in a country where a significant majority of Republicans tell pollsters they believe the current president’s victory was illegitimate.

In Wisconsin, Republicans have followed the lead of other G.O.P.-controlled states in passing a raft of new voting restrictions, though they are certain to be vetoed by Gov. Tony Evers, a Democrat. But Mr. Trump’s demands to the state party to do more to indulge his election falsehoods have frustrated leading Republicans while exposing the Devil’s bargain that many G.O.P. lawmakers have made with him: Acceding to his ultimatums is never sufficient.

“The legislative approach they’re taking to fix these problems with our voting systems is good,” said Matt Batzel, the Wisconsin-based national executive director of American Majority, a conservative grass-roots training organization. “But it was good for the base three months ago, and there’s shiny new things happening like the Arizona audit and the grass-roots moves on.”

The competing narratives collided last weekend at the Republican Party of Wisconsin’s state convention, a typically sleepy off-year gathering that was instead dominated by Mr. Trump’s accusation that Republican leaders themselves were complicit in election wrongdoing.

Wisconsin G.O.P. leaders expressed shock. In his otherwise ingratiating two-page letter, Mr. Kapenga, the State Senate president, pushed back forcefully on Mr. Trump’s claim that Mr. Kapenga was helping to inhibit an audit of the election. “It is false, and I don’t appreciate it being done before calling me and finding out the truth,” he wrote.

Mr. Vos, the Assembly speaker, who last month hired two former police officers to investigate the 2020 results, announced on Saturday that he had also hired Michael Gableman, a conservative former State Supreme Court justice who in November suggested that the election had been “stolen” from Mr. Trump, to oversee the inquiry.

In an interview on Monday, Mr. Vos expressed his loyalty to Mr. Trump but argued that the former president is not a permanent fixture in Republican politics. He said Mr. Trump’s statement had come after seeing an incorrect report in the news media or receiving “bad information from his staff.”

“I supported 95 percent of what Donald Trump did as president, right, which is as high as anybody could ever ask for because nobody’s perfect,” Mr. Vos said. “I’m not going to say the conservative movement lives or dies on whether or not Donald Trump is in the White House.” 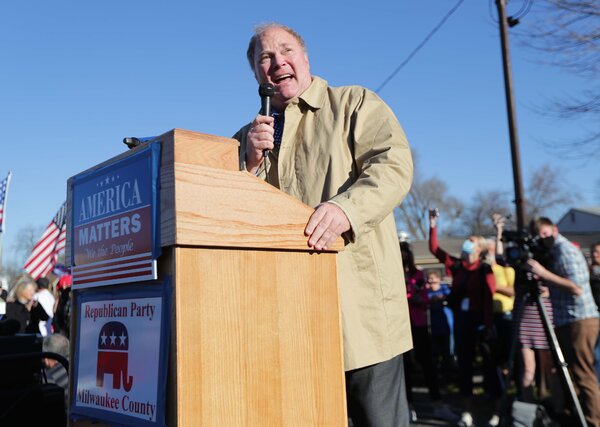 In a separate interview on Monday, Mr. Gableman declined to directly respond to questions about whether he believed Mr. Trump or President Biden was the rightful winner in Wisconsin, which Mr. Biden won by 20,682 votes out of about 3.3 million cast. Instead he, echoing other Republicans’ justification of their inquiries into the 2020 election, said the aim was to assuage doubts about how it was conducted — even though such doubts continue to be stoked by Mr. Trump and his most fervent supporters.

“Like a significant percentage of my fellow citizens, I am unsure of who the winner of the November 2020 presidential race in Wisconsin was when it is considered in the light of only those ballots that should lawfully have been counted,” Mr. Gableman said. “My hope is that this investigatory process will significantly reduce cause for such similar doubts in the future.”

Few Republicans in the country swung harder and faster for Mr. Trump than those in Wisconsin. In the 2016 presidential primary, Scott Walker, the state’s governor at the time — whose own campaign ended after 71 days with a warning against nominating Mr. Trump — organized the party’s entire political and local media apparatus behind Senator Ted Cruz of Texas in what amounted to a last-ditch effort to stop Mr. Trump.

Mr. Cruz won the state, the last one he’d carry before ending his campaign a month later. Most, but not all, Wisconsin Republicans quickly got on board with Mr. Trump. Representative Paul D. Ryan, then the House speaker, dragged his feet on endorsing Mr. Trump. Charlie Sykes, at the time the most influential conservative talk radio host in the state, never did, and quit his job to become a Never-Trump commentator.

Now, as they have in Georgia and Arizona, Mr. Trump’s false claims that he won Wisconsin’s presidential contest threaten to split Republicans. At the party convention on Saturday, Mr. Trump delivered a prerecorded message reiterating the lie that he won the state — though he didn’t mention any of the legislative leaders he had attacked in his statement the night before.

Shae Sortwell, a conservative state assemblyman who was one of 15 Wisconsin Republican state lawmakers to sign a Jan. 5 letter to Vice President Mike Pence urging him not to certify the presidential election results the next day, argued that it had “been proven” that some Wisconsin election administrators broke state law.

“I hope that they find the truth as to whether there was collusion between Democratic operatives to violate election law,” he said of Mr. Vos’s investigators. “That’s what I want to find.”

Mr. Vos has advanced legislation to make absentee voting harder and forbidden the mass collecting of early votes that the city clerk in Madison, the liberal state capital, engaged in last fall. But he has so far resisted, while not ruling out, calls to subpoena large numbers of 2020 votes and embark on an Arizona-style audit.

“I want to see what Arizona actually discovers,” Mr. Vos said. “What’s legal in Arizona might be illegal here.”

At the convention Mr. Vos faced a resolution, which was handily defeated, that called for his resignation for not sufficiently defending Mr. Trump’s false election claims. Still, there were few voices condemning Mr. Trump.

Yet one former state assemblyman, Adam Jarchow, defended Wisconsin Republican leaders in a rare statement from a Republican attacking the former president.

“This is dumb and insane,” Mr. Jarchow, who has been a stalwart Trump supporter, said in a text message statement. “Trump is outside of his mind if he thinks any of those three would do what he is accusing them of.”

He added: “If Trump thinks this is helpful, it’s not. It does what he did in — Georgia — which cost us the damn Senate.”

Wisconsin Democrats, desperate to re-elect Mr. Evers next year and eager to win the seat held by Senator Ron Johnson, a Republican, have few ways to impede the G.O.P. investigation. Mark Spreitzer, the ranking Democrat on the State Assembly’s elections committee, said that in the absence of allegations that 2020 ballots were tampered with, there was little space for the investigation to conclude in a way that would satisfy Mr. Trump and his loyalists. (Unlike in Arizona, the false arguments that Mr. Trump won Wisconsin rest on the idea that some ballots were improperly collected, not that the ballots themselves were compromised.)

“It’s been clear since the beginning that there isn’t much of a sense of direction among the Republicans,” Mr. Spreitzer said. “It’s not clear to me that they know how to tie a bow on this at the end. There isn’t going to be a smoking gun. How do you close this out? That’s the dilemma that they’re facing.”

Some local Wisconsin Republicans are not waiting for the state investigations and are trying to take matters into their own hands. In rural Clark County, where Mr. Trump won 67 percent of the vote, the local Republican Party chairwoman took out an advertisement this week in a local weekly newspaper, The Shopper, seeking to raise $1,000 for a manual recount of the 15,000 ballots cast there in November. She encouraged other county parties to do the same.

“The only way to vindicate the results,” wrote Rose LaBarbera, the G.O.P. chairwoman, “is to count the votes again.”

How Biden United a Fractious Party Under One Tent