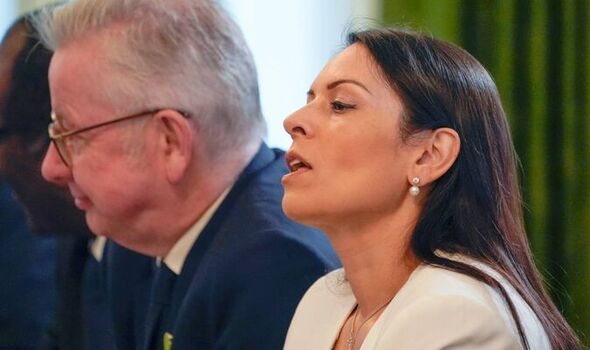 The Home Secretary promised a plane would leave soon, as pressure mounted for ministers to end the role judges in Strasbourg have over human rights disputes in the UK.

The Government’s top lawyer confirmed that an option to make sure the migration plan can be carried out is “on the table”.

Ms Patel said yesterday she was concerned about the “opaque nature” of the way the European Court of Human Rights decision was made out of hours.

She added: “While this decision by the Strasbourg court to intervene was disappointing and surprising given the repeated and considered judgments to the contrary in our domestic courts, we remain committed to this policy.”

She added: “These repeated legal barriers are very similar to those that we experience with all other removal flights.”

Ms Patel told MPs that voters had backed controls on immigration plus the right to secure borders, and she was “determined to deliver that.

“This Government will not be deterred from doing the right thing, we will not be put off by the inevitable legal last-minute challenges nor will we allow mobs to block removals. We will not stand idly by and let organised crime gangs, who are despicable in their nature and their conduct…treat human beings as cargo.

“We will do everything necessary to keep this country safe and we will continue our long and proud tradition of helping those in genuine need.”

Government insiders said they were left “blind to the process” of the ECHR. The UK’s legal team made written submissions but had no idea what the charities behind the appeals against the removals said to make their case.

At the end of the working day, five migrants were due to be deported. One won his case in the court and four were sat on the plane ready for departure.

But the Strasbourg decision triggered last-minute appeals and the final migrant was removed 30 minutes before take-off.

A Whitehall source said: “This was two months of government work down the pan thanks to one foreign court.”

Planning has started on another flight, which is expected within weeks. Ministers believe they can carry out the deportations legally under the European Convention on Human Rights.

The last-minute rulings caused frustration about the way the court interfered in the process, including if the Russian judge Mikhail Lobov was involved.

A source said: “This decision was made in a backroom in Strasbourg. There is a one in 46 chance that it was the Russian judge who made the decision, or the French – which some will say is worse.”

All the men released were to be tagged while the Government continues to “progress their relocation”. Downing Street aides said No 10 will do “whatever it takes” to ensure the flights go ahead. Officials did not rule out withdrawing from the convention. The agreement allows claims to be taken up with the Strasbourg court.

Attorney General Suella Braverman claimed many voters would be frustrated at the role played by a “foreign court. We are definitely open to assessing all options available as to what our relationship should be.”

Andrew Murrison declared the human rights convention was begun in the 1950s for “very good reason” but said the court now runs a “very real risk of losing the confidence of the British people”.

While veteran MP Peter Bone said people “who are smuggled into this country willingly pay to do so and come for economic purposes [and] deserve no protection from the Modern Slavery Act”.

But Conservative peer and onetime immigration minister Lord Kirkhope of Harrogate admitted that he had looked at possible options for “offshoring” asylum applications previously – and had decided that the policy was not a suitable direction in which to go for the UK.

Labour’s shadow home secretary Yvette Cooper yesterday attacked the Rwanda deportation plan as “government by gimmick” and a “shambles that is putting our country to shame”.

She claimed Ms Patel “knows this is unworkable, unethical and won’t stop the criminal gangs” and that the Government only cares about “picking fights and finding someone else to blame”.

Ms Cooper added, in a robust exchange across the floor of the Commons: “This isn’t a long-term plan, it is a short-term stunt. Everyone can see it..it’s not a serious policy, it’s shameless posturing and she knows it.”