WASHINGTON — It was, President Donald J. Trump proclaimed in September, “the dawn of a new Middle East.”

Speaking at the White House, Mr. Trump was announcing new diplomatic accords between Israel and two of its Gulf Arab neighbors, Bahrain and the United Arab Emirates.

“After decades of division and conflict,” Mr. Trump said, flanked by leaders from the region in a scene later replayed in his campaign ads, the Abraham Accords were laying “the foundation for a comprehensive peace across the entire region.”

Eight months later, such a peace remains a distant hope, particularly for the Middle East’s most famously intractable conflict, the one between Israel and the Palestinians. In fiery scenes all too reminiscent of the old Middle East, that conflict has entered its bloodiest phase in seven years and is renewing criticism of Mr. Trump’s approach while raising questions about the future of the accords as President Biden confronts what role the United States should play now in the region.

Mr. Trump’s approach was essentially to sidestep the challenge of reducing tensions between Israel and the Palestinians in favor of promoting closer ties between Israel and some of the Sunni Arab states, based in large part on their shared concerns about Iran.

The accords he helped negotiate were widely seen as demonstrating declining interest on the part of some of Israel’s Arab neighbors in backing the Palestinians, giving Prime Minister Benjamin Netanyahu of Israel more latitude to pursue strategies that further intensified Israeli-Palestinian tensions.

“It was very difficult for anyone who knows the region to believe that the signing of the Abraham Accords was going to be some breakthrough for peace,” said Zaha Hassan, a visiting fellow at the Carnegie Endowment for International Peace who specializes in Palestinian issues.

Vali Nasr, a professor at the Johns Hopkins School of Advanced International Studies, said that the accords had been “based on the idea that the Palestinian issue is dead,” and had rewarded Mr. Netanyahu’s hard-line approach of supporting Israeli settlement activity and other expansive territorial claims.

“This was proof of his theory that you can have land and peace,” Mr. Nasr said.

Former Trump officials say that however the hyperbolic former president billed the Abraham Accords, which later expanded to include Morocco and Sudan, they were never seen as a means of settling the Israeli-Palestinian conflict.

To the contrary, the agreement, which expanded trade and partly or fully normalized diplomatic ties between Israel and the four Arab states, instead amounted to a rebuke of the Palestinians by demonstrating that their cause no longer defined relations in the region.

Sunni Arab rulers, exasperated by the Palestinian leadership and for years quietly aligning with Israel against Shiite Iran, were moving on.

Jason Greenblatt, who served as Mr. Trump’s Middle East envoy until October 2019, argued that the current spasm of violence in and around Israel “underscores why the Abraham Accords are so essential for the region.”

They “took away the veto right for the Palestinians for the region to move forward,” he added.

Others noted that, before agreeing to the accords, the U.A.E. extracted from Mr. Netanyahu a pledge to hold off on a potential annexation of swaths of the West Bank, a move that had the potential to set off a major Palestinian uprising. (Trump officials also opposed such an annexation and Mr. Netanyahu might not have followed through regardless.)

Dennis Ross, a former Middle East peace negotiator who served under three presidents, called the accords an important step for the region, but said the violence in Israel’s cities and Gaza illustrated how “the Palestinian issue can still cast a cloud” over Israel’s relations with its Arab neighbors.

“The notion that this was ‘peace in our time’ obviously ignored the one existential conflict in the region. It wasn’t between Israel and the Arab states,” Mr. Ross said.

Most analysts say the accords — which Biden administration officials say they support and would even like to expand to include more nations — can survive the current violence. After all, officials involved in developing the agreement say, no one was under the illusion that such clashes were a thing of the past.

But images of Israeli police crackdowns on Arabs in Jerusalem and airstrikes toppling Gaza high-rises are clearly causing strain. 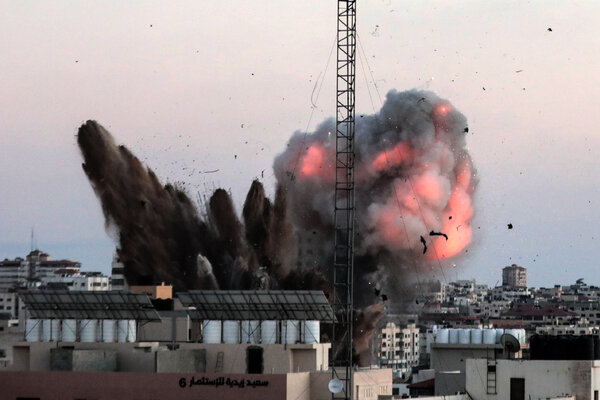 In a statement last week, the U.A.E.’s foreign affairs ministry issued a “strong condemnation” of Israel’s proposed evictions in East Jerusalem and a police attack on Jerusalem’s Al Aqsa Mosque, where Israeli officials said Palestinians had stockpiled rocks to throw at Israeli police.

Last month, the U.A.E. also denounced “acts of violence committed by right-wing extremist groups in the occupied East Jerusalem” and warned that the region could be “slipping into new levels of instability in a way that threatens peace.”

Bahrain and other Gulf states have condemned Israel in similar tones. A statement on Friday from the U.A.E.’s minister of foreign affairs, Abdullah bin Zayed al-Nahyan, called on “all parties,” not only Israel, to exercise restraint and pursue a cease-fire.

One former Trump official argued that public pressure on Israel by countries like the U.A.E. and Bahrain carry more weight after the accords, coming as they do from newly official diplomatic partners. None of the governments who are party to the accords are playing a major role in efforts to secure a cease-fire, however — a responsibility assumed in the past by Egypt and Qatar.

“It’s the non-Abraham-Accords Arabs that really will play a central role in bringing this conflagration to an end,” said Aaron David Miller, a former adviser of Israel-Arab issues under six secretaries of state.

Speaking last month to an event hosted by Israel’s embassy in Washington, D.C., Secretary of State Antony J. Blinken said that the Biden administration “welcomes and supports” the Abraham Accords, adding that he expected “Israel’s group of friends to grow even wider in the year ahead.”

But with dozens killed and hundreds injured since then, most of them Palestinians, analysts say that the prospect of other Arab nations joining the accords looks dim.

“I would say it’s highly, highly unlikely that you’re going to have anybody else join the accords,” Mr. Nasr. “It’s going to lose a lot of its momentum and energy.”

One nation seen as a potential candidate, Saudi Arabia, has issued some of the strongest condemnations of Israel in recent days. A statement from the Saudi Foreign Ministry called on the international community to “hold the Israeli occupation responsible for this escalation, and to immediately stop its escalatory actions, which violate all international norms and laws.”

Some analysts and Biden administration officials say the accords were the culmination of four years of Trump policies that embraced and empowered Mr. Netanyahu and isolated the Palestinians. Mr. Trump’s approach, they said, all but smothered hopes for the negotiated two-state solution pursued by several prior American presidents and tilted the power balance from official Palestinian leaders to the extremists of Hamas in Gaza.

Ilan Goldenberg, a former Obama administration official, conceded that Israel had also clashed with the Palestinians under Democratic administrations that had adopted a more evenhanded approach to the conflict than Mr. Trump’s nakedly pro-Israeli stance.

And he said opportunistic missile attacks on Israel by Hamas after the eruption of Jewish-Arab violence within Jerusalem was not Mr. Trump’s fault.

But Mr. Goldenberg argued that the current internecine violence within Israel was “at least partially is driven by the fact that the Trump administration supported extremist elements in Israel every step of the way,” including Israel’s settlement movement.

In November 2019, for instance, Secretary of State Mike Pompeo changed longstanding U.S. policy by declaring that the U.S. did not consider Israeli settlements in the West Bank a violation of international law. (The Biden administration intends to reverse that position once a review by government lawyers is complete.)

“You had David Friedman” — Mr. Trump’s ambassador to Jerusalem — “literally knocking down walls of holy sites with a sledgehammer and saying this is Israeli,” Mr. Goldenberg said.

Mr. Trump also moved the U.S. embassy from Tel Aviv to Jerusalem, officially recognizing the city as Israel’s capital, in a move that infuriated Palestinians who have long expected East Jerusalem to be the capital of any future state they establish.

“Trump opened the door for Israel to accelerate home demolitions, accelerate settlement activity,” Ms. Hassan said. “And when that happens and you see Israel acting upon it, that’s when you see the Palestinian resistance.”

Former Trump officials note that expert predictions of a Palestinian eruption during Mr. Trump’s term, particularly after the embassy relocation, never came to pass, and suggest that Mr. Biden’s friendlier approach to the Palestinians — including the restoration of humanitarian aid canceled by Mr. Trump — has emboldened them to challenge Israel.

Even some Trump administration officials said the suggestions from Mr. Trump and others that the accords amounted to peace in the Middle East were exaggerated.

“During my time at the White House, I always urged people not to use that term,” Mr. Greenblatt said.